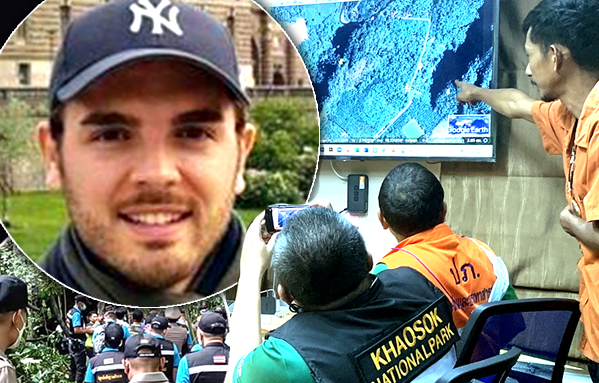 Rescue officials and police obtained the cooperation of a friend of Mr Tizzlano’s in Krabi who he is believed to have spoken to by mobile phone before his death last Saturday and this allowed them to locate his body on nearby Khao Phanthurat mountain at 12.20 pm on Thursday afternoon.

The Governor of Surat Thani in southern Thailand, Mr Wichwut Jinto has promised a review and expressed his condolences to friends and family of the French tourist whose body was located on Thursday in a crevice 150 metres up on Khao Phanthurat mountain in the Phanom district of the province in what appears to have been tragic accident or fall while searching for a lost drone. 30-year-old Gollino Cyrit Tizzlano went missing on Saturday the 12th of November and was reported to police on Tuesday the 15th after he failed to check out of his hotel the day before.

The governor of Surat Thani Wichwut Jinto, on Thursday, just after 12.30 pm, confirmed that the body of a French tourist to Thailand was found over 150 metres from the bottom of a mountain near the Khao Sok National Park in the Phanom district of Surat Thani after reports on Saturday that the man’s drone had gone missing on the mountain.

The discovery of the French man’s body comes after a co-ordinated search was launched on Wednesday which ultimately involved over 120 volunteers and officials who scoured the area in the hope of finding the French tourist after the owner of the Khao Sok Holiday Resort, on Tuesday 15th, alerted police to the circumstances when 30-year-old Mr Gollino Cyrit Tizzlano failed to check out of his hotel.

He was due to depart on Monday the 14th of November.

Staff at the hotel searched his room and found his belongings intact while the owner recalled speaking with the French guest on Saturday 12th November last when Mr Tizzlano announced his intention to go hiking in the forest.

It is reported that several locals encountered the French man on Saturday last and he informed at least one that he was searching for a drone which appeared to have gone missing.

He was last seen outside Wat Khao Phanthurat near Khao Phanthurat mountain, on Saturday, where he also appears to have made a phone call to a friend in Krabi who later assisted police in tracking down the French national’s smartphone by tracing its coordinates on the ground.

The temple is approximately 1 km from where the body of Mr Tizzlano was found suspended on a cliff face in a crevice on the Khao Phanthurat mountain amid bamboo at approximately 12.20 pm on Thursday.

K9 dogs drafted in from Chumphon on Thursday

Just before finding the French man’s body, the governor, Mr Wichut, had ordered the assistance of two K9 dogs from the Chumphon Border Patrol police service, one of whom stopped at the bottom of the mountain near where the French man was found.

The dogs had earlier been given the scent of the French man from clothes taken from his room at the resort.

Ironically, police on Wednesday and Thursday used advanced drones to search the mountain terrain to identify the body as the footage was monitored off-site by search coordinators.

Earlier, police had organised for the friend of Mr Tizzlano to travel from Krabi and were subsequently able to identify his smartphone position which matched where the body of the French man was found.

The French man’s body was found hanging from bamboo shoots on a treacherous cliff face which was hidden within foliage higher up.

Search party volunteers who found the body of the French tourist reported that they also sighted evidence of recently broken tree branches and other evidence that may suggest that the French man fell from higher up the mountain to his death in the crevice where he landed supported by the bamboo growth.

To recover the body of the French man, rappel lines had to be put in place in a difficult and intricate operation which took search party workers, including volunteers and emergency service personnel, three hours to bring the body from where it landed.

The body was then removed from the scene and taken to a local hospital for an autopsy which is standard procedure in such situations.

Officials believe that Mr Tizzlano died as the result of a misadventure in an accident as he endeavoured to retrieve the drone that had gone missing on the nearby mountain.

The French Embassy was briefed throughout the rescue by officials in Surat Thani and, on Thursday, Governor Winto issued a statement from an Incident Command Centre which had been established since Wednesday to coordinate the search for the missing Frenchman.

In it, he promised to review the circumstances of Mr Tizzlano’s death and try to find ways to prevent such a tragedy from happening again.

‘On behalf of the province of Surat Thani, the people of Surat Thani and holiday tour operators, I would like to express my condolences to those impacted by the accident which happened. Our staff will report to the embassy of the country of the deceased and we will also find ways to prevent a recurrence of incidents with tourists in the future,’ Governor Wichwut said.