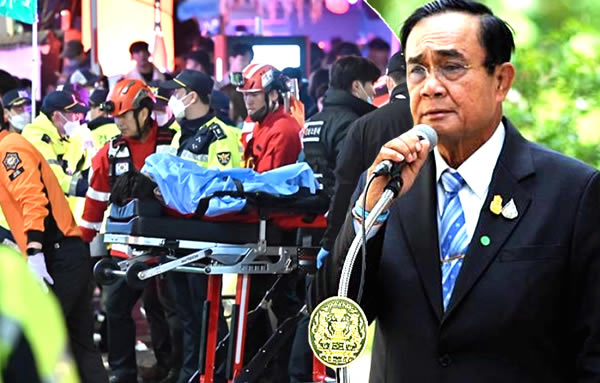 Organisers of the Khao San Road Halloween Party are still going ahead on Monday night with the annual spectacular which in the past year has been a huge draw for foreign tourists and revellers, many wearing outlandishly scary costumes which added to the real horror in Seoul on Saturday night.

Prime Minister Prayut Chan ocha has ordered Thai agencies and officials to assist Thai families with loved ones in Seoul, South Korea after it has been confirmed that at least one Thai national is among 19 foreigners killed in the stampede on Saturday night. The news comes as an organiser of a similar Halloween party in Bangkok’s Khao San Road has confirmed that the event is to go ahead after a safety review on Monday with local district officials in the Bangkok neighbourhood of Phra Nakhon.

Thai Prime Minister Prayut Chan ocha has expressed his sadness at the tragedy that unfolded in Seoul, South Korea on Saturday night when a Halloween Party went awry after it is reported that nearly 100,000 people ended up crushed together into an area near Itaewon Street in the capital which was once a red light area in the heyday of US servicemen being stationed in the city in the 1960s.

Hotlines open in Thailand for concerned families of loved ones in Seoul, South Korea, manned 24 hours

In connection with this, two hotlines on 010-6747-0095 or 010-3099-2955 were opened with a 24-hour response for concerned relatives in Thailand as the Thai Embassy in Seoul liaises with authorities there.

One Thai national has already been confirmed as among the 153 people reported killed in the crush or stampede which occurred at 10 pm in Seoul on Saturday or 8 pm Thai time.

No details as to either the gender or identity of the victim have been given as Thai officials seek to make contact with the person’s family.

From the latest update on the numbers, 56 of the dead were reported to be men with 97 women losing their lives.

Up to 100 people are injured as a team of 60 city officials frantically check hospitals with the media reporting that over 3,580 missing person reports have been filed so far by concerned or frightened friends or relatives looking for loved ones.

Reports from eyewitnesses speak of horror as some in the crowd continued to party in the district oblivious to the unfolding disaster where others were being crushed to death.

One eyewitness spoke of a screaming police officer but could not tell whether the victim was a real policeman or a man in a costume.

The tragedy with the death toll still rising, is drawing messages of support from countries around the world, particularly from those in Asia as the South Korean government responds to the disaster.

Visiting the scene on Sunday, South Korea’s President Yoon Suk Yeol, vowed to put in place measures to make sure that such an incident never happens again in the conservative country.

‘We will have relevant ministries such as the Ministry of the Interior and Safety conduct emergency inspections not only for Halloween events but also for local festivals and thoroughly manage them so they are conducted in an orderly and safe manner,’ he said in a statement carried on national TV channels.

The president promised a fund for the victims and their families with trauma support for all those who were part of what happened.

Meanwhile in Bangkok, a similar party on the capital’s famous Khao San Road, which annually attracts many foreign tourists and visitors, is to proceed on Monday night in a controversial decision that is sure to be questioned given the growing enormity of the tragedy in Seoul.

In past years, the Khao San Road party has witnessed thousands of holiday revellers wearing elaborately scary costumes just like those seen in Seoul on Saturday night which reportedly added to the horror and trauma suffered by those involved.

The organisers of the Thai event have promised, however, to hold talks with local district chiefs in the Phra Nakhon area of Bangkok before the party to review safety measures and limit the number of people entering the area.