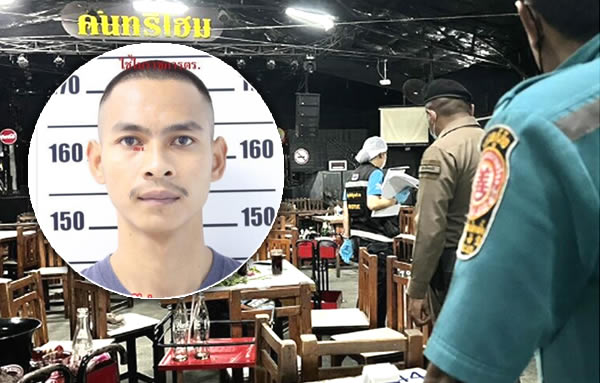 The perpetrator, known as ‘Sergeant Bird’ is a member of the Trang Special Operations Unit or SWAT team in Trang and is understood to have taken a long gun and armoured clothing with him into hiding as police widen their search net and a murder investigation into the death of his well-connected victim begins.

A policeman is on the run in Trang province after shooting a 32-year-old man in the back of the head and wounding two others in a violent outburst at the Country Home entertainment bar in the city early on Tuesday morning. It is reported that the man left the bar with another serving officer with whom he had been drinking from 3 pm on Monday.

Up to 50 police officers from the urban capital of southern Trang province, on Tuesday morning, were trying to hunt down one of their own, a highly trained officer who works with the Trang Special Operations Unit or SWAT force after he gunned down a 32-year-old man on Monday night at a popular bar in the city with a population of nearly sixty thousand inhabitants and left two men injured after they tried to intervene.

The perpetrator of the attack has been named by police as Sergeant Major Chutiphon Nakkaew also known as ‘Sergeant Bird’. It is believed that he is now on the run and carrying a long gun together with armoured clothing.

The shooting incident occurred at the ‘Country Home’ bar near the Bus Terminal located on the Phatthalung Road in the Ban Pho sub-district of Trang.

It is reported that the perpetrator, along with another police officer, who had previously worked at the popular entertainment bar, had been drinking heavily since 3 pm on Monday at Table 20 when a disagreement broke out later in the night with another customer at Table 23.

The deceased man has been named as 32-year-old Mr Chitakorn Kongchan or Khao who is known to be a close friend of many politicians in the region.

Sergeant Chutiphon is reported to have kicked a chair in his direction which caused Mr Chitakorn to become very angry in response.

As Mr Chitakorn got up to go to another floor of the establishment, the police officer shot him with a 9mm Glock handgun in the back of the head.

Police arrived to find the body in a pool of blood

His body was found by police on arrival lying in a pool of blood face down.

One of those accompanying Mr Chitakorn at his table, 42-year-old Den or Mr Wuttichai Kongpan said that the incident occurred when he was away from the table and dancing. He suddenly heard the sound of gunfire.

He told investigating police that there had never been any quarrels between the parties before.

Police at Trang Police Station received a report of the shooting at 1.15 am on Tuesday morning.

Police Lieutenant Colonel Eakkan Sakchainan said initial reports from the scene were that one man was killed and another injured.

Police responded to the incident with rescue personnel and medical staff from Trang Hospital as well as a forensics team to preserve evidence at the scene.

The wounded man was named as 34-year-old Mr Ekaphot Petcharat or Tom who tried to go to the assistance of his friend but was shot in the left hip and ankle by the perpetrator.

It is also reported that a third person, possibly a tourist, was shot in the crossfire as the policeman opened fire when tackled after he had murdered Mr Chitakorn.

The policeman, in total, fired 10 shots at the scene.

It is understood that at some point in the melee, the firearm of the killer was taken off him and when examined later by police, was found to have one round still in the ammunition magazine.

After the shooting, the policeman ran out of the pub with his friend and drove away.

Police are now searching the homes of anyone who had had contact with both the perpetrator and his colleague who is also believed to be on the run while investigators are aso reported to be looking at possible other motives for the sudden attack and murder.