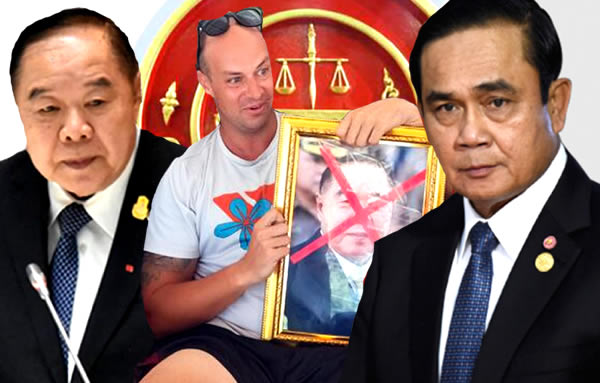 The latest move comes as the Constitutional Court in Bangkok has signalled that it will address the situation regarding Prime Minister Prayut Chan ocha’s tenure in office on Thursday next after suspending him on August 24th leading to General Prawit Wongsuwan being appointed as acting PM. The case has raised political tensions in Thailand with an election due to be called in the coming months.

A German man has been the subject of a complaint to police in Krabi filed by a leading member of a Royalist group in Thailand which is currently being reviewed by superior officers to see if there is a basis for prosecution. It alleges that the foreigner who came to public attention last week for protesting against the acting government leader was inciting civic disobedience and interfering in the kingdom’s affairs.

German man, Moritz Pfoh who made news across the kingdom last week due to his silent protest against the current caretaker PM Prawit Wongsuwan, has found himself in new hot water after he was the subject of a complaint to police in Krabi over the weekend filed by a member of a key royalist group.

On Saturday last, Mr Songchai Nienhorm of the King Protection Group filed a complaint accusing the foreign national of inciting disobedience at Nua Khlong Police Station in the Nua Khlong district of Krabi in southern Thailand.

The complaint alleged that the 35-year-old German whose Thai wife told reporters this week maintains a deep and genuine interest in Thai politics, of interfering in the internal affairs of the country.

Moritz Pfoh made the news last week after being spotted on the Sukhumvit Road in Rayong and other locations at various times for up to 30 minutes, standing by the roadside and carrying a framed photo of General Prawit with a red x taped across the portrait.

When questioned by reporters who caught up with him, the German also made clear his disdain for the current de jure Prime Minister General Prayut Chan ocha whose fate will be addressed on Thursday next by the Constitutional Court sitting in Bangkok.

General Prayut was suspended on August 24th after an initial court judgement on a case concerning an 8-year term limit imposed on the Prime Minister by Section 158 of the 2017 Constitution and which the opposition parties in parliament claimed expired on August 23rd.

Speaking to reporters last week, Mr Moritz claimed that both men had not served the country and was later visited by police who politely warned him off his protest activities pointing to possible problems renewing his immigration visa in the future.

The German indicated he was willing to do this and even offered an apology to the officers who visited him.

Mr Pfoh had claimed that 90% of Thais do not support the government led by General Prayut and General Prawit with a large media opinion poll in August showing that 93% of Thais wanted General Prayut to resign over the constitutional issue.

At the end of June this year, an authoritative National Institute of Development Administration (NIDA) opinion poll showed that General Prayut had fallen to third place in people’s preference for Prime Minister, a poll he had consistently headed up to recent times.

General Prayut had 11.68% support having fallen from first to third in the space of three months with the 35-year-old daughter of former Prime Minister Thaksin Shinawatra, Paetongtarn Shinawatra, leading the poll with 25.28% followed by Move Forward Party leader Pita Limjaroenrat on 13.24%.

With regard to political parties, the Pheu Thai Party led the field with 54.24% with the key parties in the current coalition garnering less than 20%.

The German man Mr Pfoh has been living happily in Thailand for eight years and in his defence this week, his wife told reporters that his protests were simply a sincere expression of his political opinion.

However, on Saturday last, the royalist activist Mr Songchai saw the matter in a darker light.

‘More than 60 million Thais, or about 90% of the total population, were damaged by his groundless claim that they did not favour General Prawit and General Prayut Chan-ocha,’ he said in a written complaint to police.

Consistent research in recent years has shown that a large majority of the public in Thailand and not just conservative or royalist supporters, believe and fear external interference by foreigners in the country’s political affairs.

Large segment of the Thai population, a significant majority, fear external influence in its politics

A Super Poll survey in November 2020 showed this to be the case at the height of renewed street protests which are deeply disturbing for most Thai citizens, particularly in the midst of the country’s economic challenges.

Following the complaint, police in Krabi were non-committal on whether the matter will be pursued.

The complaint was filed with Police Lieutenant Colonel Pairoj Chanachai of Krabi Police Station who explained that the matter must first be referred to his superiors to decide on future action.

The controversy over the Prime Minister’s tenure in office and his suspension has raised political tensions in the kingdom which is due to see an election called in any event, over the coming months.

PM says he is not resigning but seeks resolution as key protest leader, Anon, chooses to stay in prison

Students submit a reform petition to the Privy Council, call for a General Strike in Thailand on October 14th