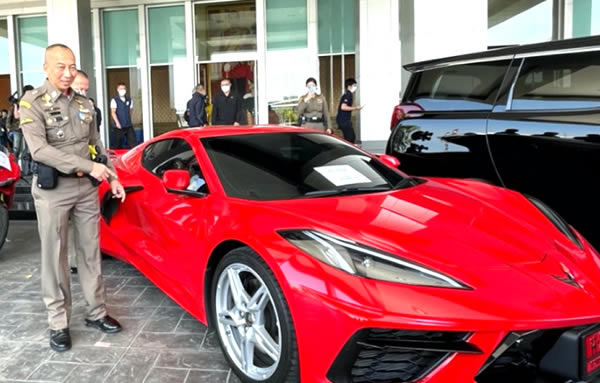 Police on Thursday at the Technology Crime Suppression Division (TCSD) headquarters in Bangkok revealed that huge amounts of drug money from Chinese criminal cartels linked with the Golden triangle are being funnelled in to buy up properties in Thailand including whole phases of new developments by using forged Thai identity documents based on real people.

Thai police revealed on Thursday that raids on three locations in Bangkok found Chinese nationals using fake Thai identity cards and with over ฿42 million in cash. It was seized in a haul of assets including property titles, cash and cars valued at ฿300 million. A press conference addressed by senior police officers General Torsak Sukwimol and Surachate Hakparn or ‘Big Joke’ heard how Chinese kingpins linked with the Golden Triangle drugs trade have been settling in Thailand since the pandemic crisis and the closure of China’s borders which has also seen the communist state deploy more authoritative surveillance techniques. General Surachate said police are now extending their investigation into a pattern of these wealthy criminal elements using Thai national identity documents and passports to live in the kingdom and to buy properties.

Thai police in a task force led by Technology Crime Suppression Division (TCSD) on Thursday put on display cars and assets seized from what senior police officers described as Chinese criminal kingpins who appeared to have stayed in Thailand during the period of the pandemic when China closed its borders and introduced draconian controls on its populace using smartphone and surveillance technologies.

The press was briefed at the Suppression Division’s headquarters just outside Bangkok in Pakkret which is considered part of the extended Bangkok metropolis but technically in the adjacent Nonthaburi province.

The police operation called ‘falling crutches, cutting branches’ saw roadblocks and searches carried out based on court-approved search warrants across the capital with three locations targeted simultaneously and 15 suspects arrested by the police.

The senior officers said the raids were ordered by National Police Commissioner Damrongsak Kittiprapat and were a follow-up on the controversial police raid last Wednesday morning which saw scores of luxury cars seized and 237 people arrested at a nightclub complex in Sathorn, Bangkok which catered exclusively to an ultra wealthy Chinese clientele.

This latest operation is believed to have resulted in the seizure of up to ฿300 million in assets and given police new intelligence on this very disturbing trend of Chinese kingpins or leading gangsters taking up residence in Thailand.

On Thursday, the senior officers revealed that one of the Chinese men arrested had a Thai national identity card while many of them had hired bodyguards or drivers.

Police believe that the Chinese nationals’ targets are involved with ‘grey money’ where illegal funds are being mixed with apparently bona fide enterprises to give them a legitimate and respectable appearance using stolen Thai identities.

The Chinese suspects are actively involved in the purchase of properties throughout Thailand, sometimes reportedly buying whole phases of developments in the name of Thai nationals with their false Thai national identity cards.

Police revealed on Thursday that at the three locations raided they found no less than ฿42 million in cash, 10 luxury cars and the deeds to properties.

Police General Torsak who last week brought down a scheme by scammer gangs in Cambodia run by Chinese criminal organisations, to buy data from a Ministry of Commerce official and his wife as well as a policeman in Prachuap Khiri Khan, said that the current campaign was part of the government’s policy and an order from the national police chief to act against crime kingpins to prevent more serious problems.

While making his comments, General Torsak said that there have been cases of foreigners dying in nightlife centres where illicit narcotics are being sold and used.

He said that many of these dens, also including illegal gambling, were owned by foreign investors.

On the raid in the Yannawa area of Sathorn last Tuesday, Police General Torsak said that the key suspect linked to that enterprise was involved in drug distribution and money laundering.

He said that the man, a Chinese national, had entered Thailand using a Cambodian passport.

He disclosed that many of the Chinese suspects being arrested had been able to obtain Thai identity cards and were involved in laundering dirty money and ‘grey’ into real estate assets and other expensive assets such as luxury cars and apartments.

This week’s raids were executed on foot of search warrants issued by the Criminal Court based on what is an expanding police investigation.

Two properties raided in the Prawet area of Bangkok

The first location raided on Thursday was in the Prawet district of Bangkok where police detained 5 Chinese nationals and 3 Thai citizens.

The premises were found to contain three supercars including a red Chevrolet Stingray valued at ฿10 million.

The second location, also in Prawet, in the Southeast of Bangkok, was at a house owned by Mr Lin Yian or Mr Yapaso Sawanya Khiri.

There, police seized three cars including a luxury Toyota Alphard car along with a Patek Philippe watch and ฿7.5 million in cash.

They also seized a Thai national identity card in the name of Mr Yapasor Sawanya Khiri and a Thai passport similarly named.

The third location targeted by police was on Sukhumvit Soi 39 where 4 Chinese nationals were found to be present when police arrived.

At the address, police found ฿28 million in cash as well as 8 luxury designer handbags.

Giving background information on the raids to reporters on Thursday, General Torsak said that the Thai national identity document was linked to a Chiang Mai resident, who was in fact, a corn farmer and bore no similarity to the Chinese man arrested by police.

Police located the passports of two other individuals purporting to be Thai and Cambodian nationals.

The passports showed evidence of 25 trips to and from Cambodia, and 12 to Kuala Lumpur in Malaysia.

Intelligence gleaned in the raids show links to restaurants in Laos and the Golden Triangle, outside Thailand’s borders and adjacent to Laos, China and Myanmar which is perhaps the world’s biggest illicit drug manufacturing area.