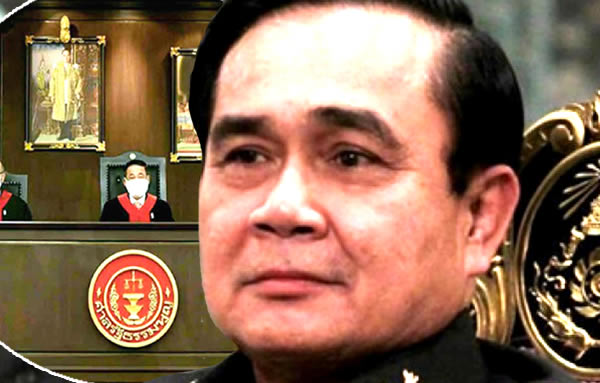 The court took the middle course of three options with dates ranging from 2022 to 2027. The verdict means that Prime Minister Prayut Chan ocha again resumes his duties at Government House where acting Prime Minister Prawit Wongsuwan has carried out the role since August 24th last.

The Constitutional Court has lifted the suspension imposed on General Prayut Chan ocha as Prime Minister on August 24th and reaffirmed his eligibility for the role until April 2025 provided the government leader is re-elected to the position after the 2023 General Election. The verdict handed down at 3 pm on Friday was a majority one.

Thailand’s Constitutional Court, on Friday, lifted the suspension of Prime Minister Prayut Chan ocha and confirmed his position saying that an 8-year term limit imposed by the 2017 Constitution only expires in 2025.

The interpretation handed down by the court was the middle course of three potential options before the court and means that it has affirmed that General Prayut became Prime Minister on April 6th 2017 when the new constitution came into effect and assumed the status quo at that point to begin the prime minister’s term.

‘The tenure of the subject (the prime minister) from April 6th 2017 to Aug 24th 2022, has not reached its term limit and the court rules by a majority vote that his premiership has not ended in accordance with the 2017 constitution,’ the verdict of the court read.

The verdict took 30 minutes to read out after proceedings began at 3 pm.

It effectively means that Prime Minister Prayut Chan ocha, if reelected, after the next General Election can serve until April 6th 2025.

General Prayut now resumes his duties as Prime Minister after spending the past few weeks as Defence Minister, a secondary role he has held since 2019 which was not subject to a constitutional limit.

The court proceedings and the verdict handed down on Friday followed a petition to the court formalised by House of Representatives Speaker Chuan Leekpai challenging the prime minister’s tenure under Section 158 of Thailand’s Constitution which imposed a term limit on the office of prime minister meaning that any person cannot hold the position in excess of eight years excluding periods when a prime minister holds office in a caretaker role under constitutional provisions.

On Friday, it was reported that General Prayut went to work at the Defence Ministry but later returned home to his residence at a military compound in Bangkok to watch the court verdict which returned him to power at Government House, the seat of Thailand’s government where acting Prime Minister Prawit Wongsuwan has undertaken the role since August 24th.

This week, General Prawit told reporters that he would welcome the return of his ‘brother in arms’ and fellow former army chief if that was the verdict of the Constitutional Court.

General Prayut assumed the office of Prime Minister in August 2014 after the coup that year which he led as head of the armed forces on May 22nd 2014 which ousted the vestiges of the government of Yingluck Shinawatra who had earlier been removed by the Constitutional Court for abuse of power.

The Prime Minister was elected by a new parliament ushered in under the 2017 Constitution in 2019 and was seen by many in Thailand as having brought peace and stability to the kingdom following a fractious political environment in 2013 and 2014 which, at one point, brought the capital Bangkok to a standstill in the days leading up to the coup.

However, his second democratically elected government has proved deeply unpopular, facing protests in the streets over the 2017 constitution which was approved by the public in a controversial plebiscite in 2016 while still under junta rule with strict reporting and public discussion rules.

His government has also overseen a period of economic malaise exacerbated by the virus pandemic and rising geopolitical tensions.

In a recent opinion poll, Prime Minister Prayut Chan ocha came third in a regular quarterly National Institute of Development Administration (NIDA) survey of the most popular candidates for prime minister with 10.12% of public support behind the leader of the progressive Move Forward Party, Pita Limjaroenrat on 13.24% and Ms Paetongtarn Shinawatra, niece of former Prime Minister Yingluck Shinawatra and daughter of Thaksin Shinawatra, another former Prime Minister who as well as his sister was ousted by the military in the September 2006 coup.

Ms Paetongtarn Shinawatra led the poll with 21.6% support with leading opposition parties having the support of over 45% of the electorate compared to just 15% for the three key coalition government parties that make up Prime Minister Prayut Chan ocha’s government with an election looming in the next 6 to 7 months.