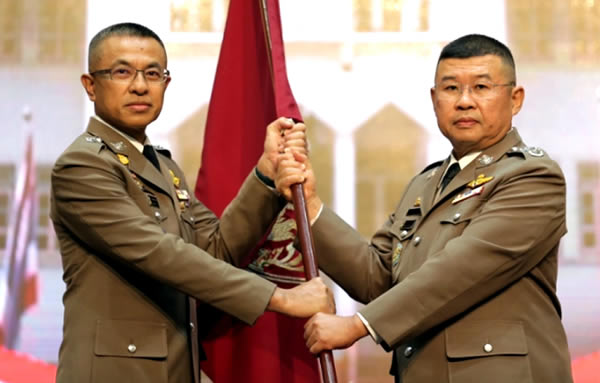 Touching ceremony at Royal Thai Police headquarters sees power transferred from one police chief to the next. General Damrongsak Kittiprapat takes up the role as leader of an organisation with up to 230,000 officers at any one time and 20% of all civil servants employed in Thailand across dozens of agencies.

On Friday, at Royal Thai Police headquarters there was all change as new police commissioner General Damrongsak Kittiprapat took up his role from General Suwat Jang­yod­suk and quickly followed up on Saturday with details of a crackdown on illegal gun distribution in the kingdom.

Thailand’s new National Police Commissioner took up his role on Friday at a poignant ceremony at Royal Thai Police headquarters attended by all senior officers at the rank of deputy commissioner or assistant police commissioner.

The outgoing police chief, General Suwat Jang­yod­suk, whose tenure in the job has been unblemished, presided over a period which brought several high-profile successful investigations that made their mark on the force’s reputation both inside and outside Thailand, for solving cases and tackling difficult cases.

This includes the swift and effective response to the contract murder of drug kingpin Jimmy Sandhu in Phuket earlier this year which ultimately led to the arrest and demise of the two culprits, hitmen hired by a rival drugs network, former Canadian military personnel, after they thought they had escaped retribution by returning to Canada.

The swift and successful investigation was personally led by General Suwat and can be seen as part of a pattern during the now ex-police chief’s time in office when high-profile incidents with the potential to reflect poorly on the kingdom and the police force were dealt with forcefully with no resources spared to unearth the truth and pursue the course of justice.

On the other hand, the shocking case of a police chief in Nakhan Sawan province in August 2021 who murdered a suspect in custody shook public confidence in the force.

The direct and forthright response from police headquarters in Bangkok and the subsequent conviction of former Police Colonel  Thitisan Utthanaphon, known as ‘Ferrari Joe’ and six other police officers and the death sentences handed down by the court this year, left no one in any doubt of the determination of top brass to deal with corrupt officers and that abuses would not be covered up.

On Friday, the incoming new police chief General Damrongsak Kittiprapat was given an honour guard as he played his part in a ceremony where a handover letter was signed and the new chief was presented with a flag by General Suwat as he departed the role at a ceremony held in the Sriyanon room at police headquarters.

The two police chiefs earlier paid homage to statues at the complex of King Rama IV and King Rama IX.

General Suwat told the gathering that he had seen the work undertaken by General Damrongsak Kittiprapatat first-hand and was satisfied that the incoming police chief would serve with distinction and integrity while being an asset to the country and government.

The new police chief takes the reins of an organisation with anywhere from 210,000 to 230,000 serving officers at any one time or up to 20% of civil servants in Thailand spread across dozens of separate divisions or agencies tasked with upholding law and order in the kingdom.

It is a formidable challenge in a country of nearly 70 million people facing threats from illegal drug syndicates, terrorist organisations, subversive groups and a wide array of crime committed in a society challenged by widening inequality with high levels of poverty and deprivation.

He said the new man in the job had always shown himself capable of outstanding work in whatever he was tasked to do.

The outgoing police commissioner predicted that General Damrongsak would lead with both dignity and success.

In November last year, General Damrongsak led an investigation that saw an all-female gang of US dollar counterfeiters arrested in Nakhon Pathom and $5 million in counterfeit currency seized.

For his part, on Friday, General Damrongsak thanked His Majesty the King for the opportunity to serve in his new role and promised to pursue it with diligence and perseverance.

General Damrongsak promised to undertake the role to the best of his physical and mental abilities while always adhering to the rule of law and fundamental moral principles as was the custom of the Royal Thai Police which served both the nation and society.

On Saturday, just one day into the job, General Damrongsak Kittiprapat revealed that an ongoing investigation into illegal arms networks in Thailand has led to the arrest of 61 people and seen 145 firearms seized by the police.

General Damrongsak said the ongoing investigation was launched after several incidents including a fatal shooting at a restaurant in Ubon Ratchathani and the case of a young mechanic who murdered a friend.

These investigations led to police discovering that the guns in question were purchased through online sales channels.

He said the crackdown which was ordered, involved 126 checkpoints across 50 provinces in the country and that the operation would continue in an effort by the Royal Thai Police to save lives.

The ongoing investigation is being led by the Central Investigation Bureau (CIB) headed by Police Lieutenant General Jiraphop Phuridech.

The senior officer said the campaign against ‘ghost guns’ also involved disturbing organised crime syndicates in Thailand and the activities of hitmen.

He warned anyone involved in the unauthorised selling of firearms or any components linked to unregistered firearms that they were committing a serious criminal offence and would be tracked down by police and prosecuted to the fullest extent under the country’s firearms acts as well as other statutes.