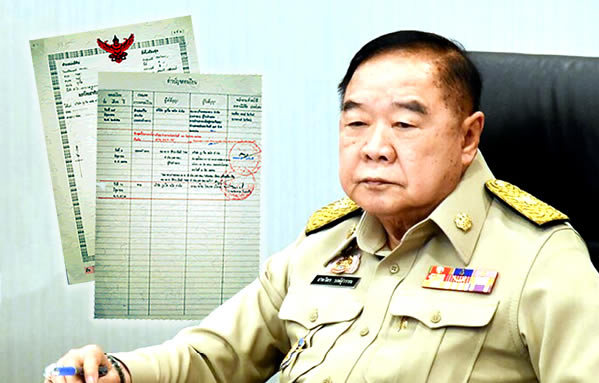 Minister of the Interior General Anupong argues that there are other options for foreigners seeking to acquire property in Thailand and that the new 10-year Long Term Visa proposal is already an attractive proposition for investors and wealthy people across the globe seeking a better lifestyle.

General Prawit Wongsuwan intervened on Monday to withdraw the controversial plan to allow foreigners to buy residential land in Thailand. It is understood that an application will be made on Tuesday by the Minister of the Interior General Anupong Paochinda to withdraw the regulation agreed in principle by the cabinet on October 25th last. It comes as the minister responsible for the plan and the accompanying 10 year Long Term Visa proposal, Deputy Prime Minister and Economics Czar Supattanapong Punmeechaow, has revealed a disappointing response to the scheme since it went live in September and has accepted that its goals might have to be addressed given stiff competition, particularly from Indonesia.

Deputy Prime Minister Prawit Wongsuwan has signed an order to withdraw the regulation allowing foreigners with newly launched long-term visas, to purchase up to one rai or 0.4 acres of land for residential purposes in Thailand in key urban centres.

The move, on Monday, is expected to be discussed at the cabinet on Tuesday 8th of November.

It is understood that Minister of the Interior, General Anupong Paochinda, on Tuesday, at the weekly cabinet meeting will withdraw the draft regulation which was agreed upon on October 25th in principle and was before the Council of State.

The proposal has run into a raging storm of criticism in a kingdom particularly uneasy in the last few weeks with growing evidence of existing abuses by ultra-wealthy Chinese people who are investing in the property market using illegal drug money. This is a disturbingly similar pattern already seen in Myanmar and Cambodia.

In many cases, Chinese buyers are using fake identification details of Thai nationals to buy vast arrays of properties.

Tanit Sorat, the Vice Chairman of the Employers Confederation of Thai Trade and Industry opposed the proposed regulation on the day it was announced.

He suggested instead granting Thai citizenship and nationality to foreign individuals with the expertise and investment capital needed to progress the government’s flagship Eastern Economic Corridor (EEC) project in Eastern Thailand.

Recent reports suggest that Chinese buyers armed with cash have been securing whole phases of key property developments in the kingdom.

On Monday, it is reported that the Director-general of the Land Department speaking to reporters on the issue, disclosed that General Anupong had referred the matter to General Prawit Wongsuwan.

The regulation is now being withdrawn from consideration by the Cabinet until all opinions on the matter have been heard in what has turned out to be a highly charged subject.

The proposals have given the government a black eye as the country gears up for a General Election next year as it is now seen to be backing down on a proposal that had been in development since early last year by a key member of a team led by Deputy Prime Minister and Economic Czar Supattanapong Punmeechaow.

The plan to offer property rights to new 10-year Long Term Visa holders has been a key facet of that proposal since it was introduced by former JP Morgan boss in Thailand Chayotid Kridakon in April 2021.

The scheme was originally seen as targeted at wealthy and talented western foreigners.

However, in recent weeks since October 25th, a rising chorus of sharp criticism has senior ministers and officials accused of ‘treason’ under the kingdom’s constitution over the plans to allow foreigners to own small plots of land even with strict conditions and with the offer exclusively reserved, on a once off basis with controlled resale rights, to the new 10-year long term visa holders.

Over the weekend, following a meeting of the Centre for Economic Situation Administration (CESA) last Friday to discuss the proposal which was a key part of a plan to attract up to 1 million foreigners to live and work in Thailand, Deputy Prime Minister Supattanapong Punmeechaow told the media that since early September the government had received 1,300 applications for the new 10 year visas.

Disappointing: only 1,300 applications in 9 weeks, well below the ambitious targets for the visa scheme

He revealed that many of these applicants were from both the United States and the United Kingdom.

The figure, however, is somewhat disappointing when considered against the plans set out initially in 2021 with one million foreigners projected by 2026.

Minister Supattanapong said that a new public relations campaign will be launched to promote the scheme.

He admitted that the government would have to now look carefully at whether the goal of attracting 1 million foreigners over 5 years to 2027 was achievable or not.

He noted that similar schemes were now on the market in competition with Thailand run by the government of Indonesia and authorities in Bali.

General Anupong Paochinda, the Interior Minister says that there are still other property options for wealthy foreigners living and working in Thailand

Over the weekend, while strongly indicating the government’s position on land ownership rights for elite foreigners was now clearly on the back foot, the Minister of the Interior General Anupong Paochinda pointed out that even without the residential land ownership concession, the package on offer to wealthy foreign entrepreneurs, retirees and highly skilled people around the world was still very competitive.

General Anupong emphasised that foreigners can still avail of the 30-year renewable lease route on properties as well as the legal right foreigners already have to purchase condominiums subject to the rule that a maximum of 49% of any development of units are to be held by foreign interests.

He drew attention to the demanding requirements in terms of assets and income for those seeking and obtaining the new 10-year long-term visa.

General Anupong reminded people that there was already a regulation introduced in 2002 by the Thaksin government which gives foreigners the right to own small residential land plots in key urban areas subject to an application to the Ministry of the Interior and holding such an investment for at least five years.

Government listening to the voice of the people

However, it has emerged in recent weeks that only 8 property purchases under this provision, another government regulation issued by the Ministry of the Interior, have taken place since 2002.

The senior minister, at the same time, said that the government will listen to the voice of the people as well as a large section of Thailand’s business and community leaders who have spoken out strongly against the new, wider residential land concession for foreigners on the basis that it could be abused by unscrupulous actors.

Over the weekend, General Anupong noted that the proposal was still before the Council of State although after Monday’s order it will now be withdrawn.