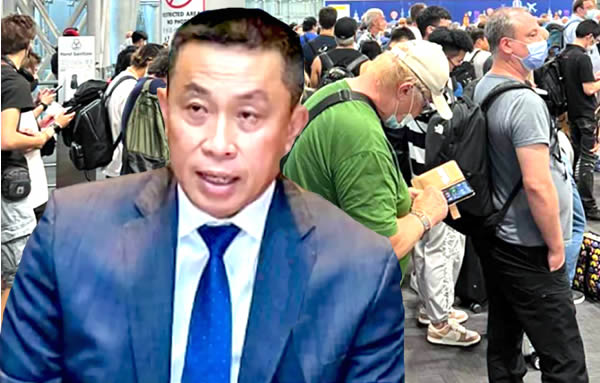 An Immigration Bureau spokesman on Wednesday warned of longer waiting periods at arrivals with large numbers and tighter screening in advance of the Asia-Pacific Economic Cooperation (APEC) Summit on the 18th and 19th of November. It comes with rising foreign tourist numbers despite the kingdom being held back by lower flight connectivity at about 50% of pre-pandemic levels meaning more short-haul, lower-spending visitors.

Thai authorities are warning passengers over the coming weeks arriving in Thailand to expect delays when being processed at Suvarnabhumi Airport. This is because of tightened security as Thailand hosts the Asia-Pacific Economic Cooperation (APEC) summit on November 18th and 19th. It comes as the number of arrivals in the kingdom is growing although there has been a problem attracting long-haul tourists with 72% of visits coming from lower spenders in the short-haul market. It is a trend that may continue as the country lags behind its peers in Asia in getting back to the level of pre-pandemic flight connectivity that led it to a record year in 2019 with 40 million foreign tourists aided by lower economy fares. The number is expected to be approximately 11 million this year with the latest news being that the Tourism Authority of Thailand (TAT) has only projected 18 million visitors in 2023 as its ‘base’ figure.

89% of flights in 2022 landed in Suvarnabhumi and Don Muang airports in the capital, Bangkok

The two main airports in Bangkok, Suvarnabhumi Airport and Don Muang, accounted for 89% of air flights into the country with the balance being catered for by regional airports such as Phuket International.

With two months to go until the end of the year, this means Thailand is on target to welcome between 11 million and 12 million arrivals this year.

The figure for foreign tourists however will be slightly less.

The projected end-of-year figures are likely to be significantly exceeded, however, with the Tourism Authority of Thailand (TAT) on Wednesday projecting 2.87 million visitors alone from the Asia and South Pacific region in the next two months.

The Tourism Authority of Thailand (TAT) was a little bit less optimistic about the prospects for 2023 compared to government agencies such as the National Economic and Social Development Council (NESDC), the Bank of Thailand and the Ministry of Finance

Economists at these institutions have been confidently predicting 21 million visitors in 2023 but on Wednesday, a Tourism Authority of Thailand (TAT) regional boss outlined what he described as the agency’s ‘base case scenario’ with a projection of only 18 million visitors next year.

Significantly also, 72% or 13 million of the visitors will be from lower spending short-haul markets with only 5 million long haul travellers or bigger spenders in 2023 currently being projected.

The information was presented by Thanet Phetsuwan, the deputy governor of the tourism promotion agency for Asia and the South Pacific.

In September, the Tourism Authority of Thailand (TAT) promised that Thailand would achieve 50% of pre-pandemic flight connectivity in the latter half of 2022 from roughly a third in the middle of the year.

However, this bottleneck has been a boon to Thai Airways, which has put on increased flights from Europe.

The problem has been thwarting the long-haul traffic market to Thailand by pushing up economy fares by at least 40%.

The kingdom is losing ground as key travel hubs in China, Japan and even Finland saw flight networks to Thailand disrupted.

This has led the kingdom to become reliant on short-haul tourists.

Thailand’s performance has lagged behind Vietnam which has returned to 89% connectivity while India and Malaysia have achieved 85% and 68% respectively.

65% of arrivals so far this year from either Asia or the South Pacific with 191,742 Chinese visitors

The Tourism Authority of Thailand (TAT), on Wednesday, said that to October 30th last, the country has seen 7.59 million foreign visitors arriving by air with 54% or 4.1 million of these flying from Southeast Asia, South Asia and the South Pacific.

Interestingly, despite strict controls in China and a prohibition on outbound foreign tourism, China still accounted for 191,742 visitors including business travellers and students.

Mr Thanet said the current projections do not take into account any visitors from China at this point for 2023.

‘We have to respect each country’s decision on whether to ease travel restrictions,’ he commented. ‘For China, if the zero-Covid policy is prolonged until next year, we might see only a gradual resumption of visitors from certain groups, similar to this year.’

The Tourism Authority of Thailand (TAT) chief said the problem for Thailand in 2022 was that foreign tourists are returning more quickly to what are seen as more developed tourist destinations such as Japan, South Korea and Taiwan which are also striving to gain market share.

‘Developed countries with strong infrastructures, such as Japan, South Korea and Taiwan, will have an advantage in attracting tourists as they can resume faster,’ he explained.

Meanwhile, as incoming foreign tourism continues to rise, although, in numbers not anywhere near previous years, the Immigration Bureau at Suvarnabhumi Airport, the country’s main entry point, has announced tightened security at the airport in advance of the Asia-Pacific Economic Cooperation (APEC) summit in the capital on the 18th of the month.

Passengers are being warned that queues of up to an hour can be expected as was seen last Sunday between 1 pm and 5 pm when a crowd of 4,000 to 5,000 people built up at the airport’s arrivals hall.

‘Immigration police must watch out for foreigners who may arrive in the guise of a tourist for criminal purposes, especially call scams or maybe to cause a disturbance during the coming Asia-Pacific Economic Cooperation (APEC) summit,’ Police Major General Choengron Rimphadee, a spokesman for the Immigration Bureau, told the media.

He asked all incoming passengers to have their flight documents ready when interviewed by officers to speed up the process but pointed out that Thailand is currently seeing arrivals between 45,000 to 50,000 a day, so some delays are unavoidable.

He said the Immigration Bureau was deploying extra duty officers to boost processing capacity from 5,500 per hour to 6,500.

The Airports of Thailand (AOT) are also assisting the police to assist incoming foreign tourists and minimise any problems.