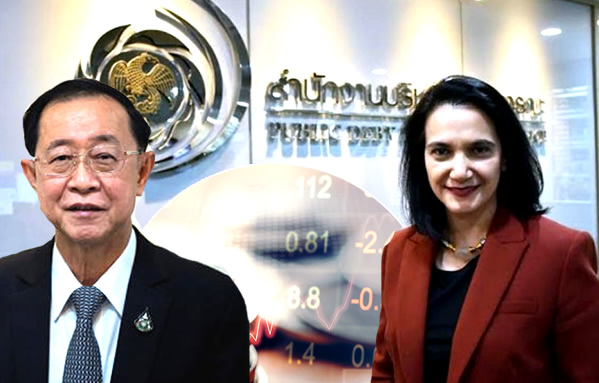 Kingdom’s finances appear to be sound with a projected debt-to-GDP ratio in 2023 of 60.4% which is extremely prudent by international standards. The fact that over 98% of public debt funding comes from within Thailand also makes the country impervious to turmoil on international markets.

Thailand has unveiled a range of green, social and sustainability bonds to fund ฿900 billion in investment projects from 2023 to 2027 to boost the economy and competitiveness. It comes as Minister of Finance Arkhom Termpittayapaisith has also signalled that from the middle of next year, after a burst of economic stimulus to support public consumption at the start of the year, it will be business as usual. He said the kingdom will move back towards a balanced budget with sources within the ministry pointing to a need to raise the tax take through a broader base and plugging existing concessions.

Thailand’s Minister of Finance has said that the state will provide economic stimulus in early 2023 to boost consumer spending while the economy in 2022 remains on course to grow by between 3% and 3.5%.

He was speaking on Tuesday after the government’s Public Debt Management Office (PDMO) led by Director-general Patricia Mongkhonvanit revealed an analysis was undertaken, within the Finance Ministry, on ฿805 billion of ฿1 trillion of the government’s special loan-funded spending to support the economy during the pandemic emergency. It showed the additional spending had generated increased GDP in the order of ฿2.65 trillion while creating ฿513 billion in extra tax revenue for the exchequer.

Ms Patricia told reporters that the expenditure was analysed according to standards laid down by both the Organisation for Economic Co-operation and Development (OECD) and the Japan International Cooperation Agency.

She indicated the government received an A rating for the management and disbursement of funds raised to support the economy.

She was speaking as her office has unveiled a new ฿900 billion borrowing programme to be financed by bonds to fund infrastructure development from 2023 through to 2027.

Infrastructure loans over 4 years with green, social and sustainability bonds to boost competitiveness

The money will be spent by state agencies and enterprises on infrastructure projects in the transport, energy and utility sectors as well as the development of commercial space to underpin future economic growth in the kingdom and boost productivity.

To emphasise the nature of such investment the debt instruments issued by the government, the new debt offerings will be divided up into green bonds, social development bonds and sustainability bonds all aimed at medium-term financing with different costs linked to risk levels and the nature of the bonds.

Moody’s – debt is 98.5% denominated in Thai baht as two views of the economy are at odds

Rating agencies such as Moodys and Fitch Ratings have consistently highlighted that over 98% of Thai public debt is sourced within the kingdom, a key strength for the country which together with ample foreign exchange reserves, a well-regulated banking system and prudent borrowing policies, puts Thailand in a strong position to weather any economic storm.

On Tuesday, Minister of Finance Arkhom Termpittayapaisith signalled that Thailand, from 2023 would open the year with a ฿90 billion stimulus package.

The kingdom is looking at a tax on stock exchange transactions while plugging loopholes and waivers in the existing tax structure when it comes to large taxpayers and businesses.

Tax take as a percentage of GDP to fall until 2026 under current trends, this may need to be corrected

There is some concern within the Ministry of Finance that, based on current economic trends and indicators, the state’s revenue will decline as a proportion of GDP from 14.6% in 2021 to 13.3% in 2026.

On Monday, Patricia Mongkhonvanit of the Public Debt Management Office (PDMO) highlighted that public borrowing as a percentage of GDP is projected to fall from 60.6% to 60.4% in 2023.

The currently legally sanctioned limit is 70% of GDP which is prudent by international standards.

The budget deficit from the 1st October 2022 to 30th September 2023 is expected to be ฿695 billion although Reuters reported a total borrowing requirement of ฿820 billion for the year in September.

Thailand’s GDP is expected to grow from ฿17.2 trillion in 2022 to ฿18.5 trillion in 2023 driven by economic growth, currency fluctuations and inflation.