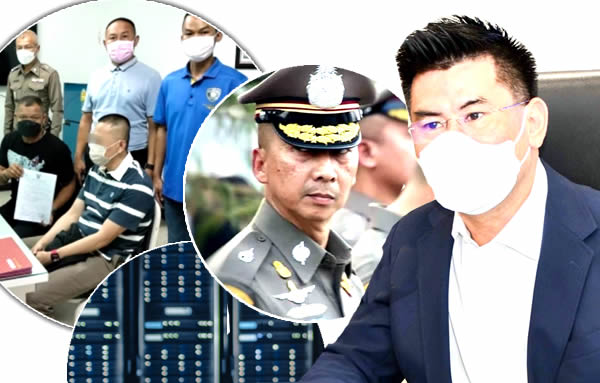 Chiang Mai-based doctor, in July, lost ฿6.9 million after speaking with what she thought was a senior officer with the Department of Special Investigation (DSI) while later being told she faced imminent arrest after her accounts were forensically analysed.

The Commerce Ministry is setting up a committee to report by November 4th into the activities of an official within the Department of Internal Trade who cybercrime police suspect has been feeding business registration data to sophisticated scam centre gangs operated from Cambodia. The man, together with his wife, is reported to have been receiving ฿20,000 a day for the data. On Friday, the cybercrime chief, Police General Torsak Sukwimol, revealed to reporters that an alert official at a bank reported the incoming funds transfer pattern to the police which led to the people including a police officer with the Crime Suppression Division (CSD) in Prachuap Khiri Khan being identified as working in cahoots with the fraudsters.

The Director-general of the Department of Internal Trade at the Ministry of Commerce, Wattanasak Sueaiam, has revealed that an internal enquiry into the activities of an official at the ministry ordered by Minister of Commerce Jurin Laksanawisit will be completed within five days or by November 4th following revelations on Friday where it emerged that a senior police officer in Prachuap Khiri Khan has been arrested and charged with selling information on Thai nationals and residents from a government database to Chinese call centre scammer gangs and that an official linked with the ministry was also implicated.

Wattanasak Sueaiam said that preliminary information from police suggested collusion with a criminal operation involving an official at the department and his wife.

Report due by Thursday, November 4th into activities of the suspect official who cyber police believe worked with his wife to facilitate the scammers

A fact-checking and audit committee has been set up which will report within days.

‘If the results of the fact check, it is found that the offence was actually committed, this official must be prosecuted to the fullest extent, both criminal and civil, including a disciplinary committee which must be set up. If a serious violation of discipline is found, the maximum penalty is dismissal and the official will not receive any pension,’ Mr Wattanasak said.

The development comes after it was revealed on Friday that a court in Prachuap Khiri Khan, on October 11th, granted temporary bail until the end of the month to Police Lieutenant Colonel Karnaboon Boonkerd, the Crime Suppression Division (CSD) chief at Ao Noi Police Station in the province in connection with charges after an investigation by the cyber crime police.

He appeared in court that day and security for bail was provided by the officer’s father.

Details of the case were outlined to reporters on Friday by the Deputy National Police Commissioner and chief of the Cybercrime Investigation Bureau (CIB), Police General Torsak Sukwimol.

He revealed that, in all, 16 people had been arrested in connection with this nationwide crackdown on the crime wave over the last year, many of them people who had set up bank accounts to facilitate offshore scammers targeting Thailand so that money could be transferred to them.

Many of these call centres are reported to be operated from Cambodia by elaborate Chinese crime syndicates.

The police chief revealed that three of those identified were involved in selling data to the scam call centres which they used to target Thai people using up-to-date data from national databases.

Police confirmed that the state officials involved were being paid regular sums of money by the gangs, reported to be ฿20,000 per day or ฿600,000 per month.

One of these was later revealed as Police Colonel Karnaboon.

The cybercrime commissioner said that the officials, between them, had access to the national databases, inside data which allowed them to make contact and dupe their victims often posing as senior police officials.

In the case of Police Colonel Kornaboon, he revealed that the crime suppression officer had a personal password that gave him access to information on civil registrations with cybercrime investigators establishing a repeated pattern of the officer accessing this section trawling for information which was later sold on.

The married couple identified at the Ministry of Commerce had access to data on business registrations and people with larger amounts of capital who had invested in companies and enterprises.

It is understood that the activities of the three officials were brought to light when one of their banks reported the unusual nature of the regular fund transfers into their accounts on a daily basis.

Chiang Mai-based doctor was warned she faced imminent arrest after being told her accounts would be forensically analysed, she paid out ฿6.9 million

Police gave details of one of the scams in which a Chiang Mai-based doctor was the victim.

The woman filed a report with the police on July 21st last after she was bilked out of ฿6.9 million which she send thinking that she was avoiding being imminently arrested by the police.

She was told that the police section which investigates serious crime cases in Thailand, was investigating her activities as a possible serious criminal offence.

She was informed, first of all, that it was determined that her bank accounts must be forensically examined.

Police officer removed from the force on October 10th

The doctor received an arrest warrant with her name and photo on it.

In order to avoid imminent arrest and prosecution, she send ฿6.9 million to an account controlled by the scammers before later realising she had been conned.

An investigating committee has been set up to examine the former officer’s activities and report on the matter.