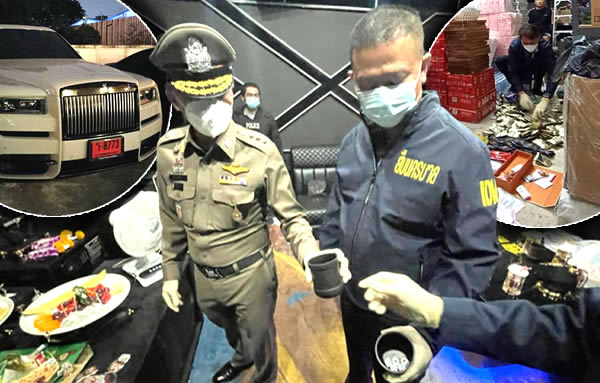 Police seized ฿1.3 million in cash from two safes while they failed to open four others at a completely unlicensed Chinese-run high-end nightlife complex in Sathorn which had a drug warehouse at the back, where sachets of drugs in different colours sold for between ฿10,000 to ฿25,000 each to over 200 nearly exclusively high-end Chinese customers, after Wednesday morning’s raid, which saw the local police chief transferred.

A nationwide police crackdown on illegal drug distribution has shone a spotlight on illegal practices in the nightlife industry linked to Chinese nationals and the underworld where huge amounts of drugs and illicit money are moved across Thailand, particularly in Bangkok and Pattaya. In Bangkok, on Wednesday morning, following a raid on a completely illegal and off-the-radar high-end nightlife complex in Sathorn, the police chief of Yannawa Police Station was removed from his post while in Pattaya, a high-level task force led by ‘Big Joke’ has vowed to charge any officers colluding with the operators of the now closed Pattaya One nightclub in the city. That venue was shut down on Sunday morning and is believed to be linked to illegal drug funds and a Chinese kingpin owner.

A senior police officer, the police chief of the Yannawa sub-district of Bangkok, was removed from his duties on Wednesday after a raid on three buildings situated on the Charoen Rat Road in the commercial Sathorn district of the capital, revealed an extraordinary illegal nightclub catering entirely to a well-heeled Chinese clientele where large quantities of expensive and illicit drugs were being consumed by wealthy punters.

The raid is part of a nationwide crackdown ordered by National Police Commissioner General Damrongsak Kittiprapat into illicit drugs across the country following the Nong Bua Lamphu atrocity on October 7th in which a drug-crazed policeman massacred 36 people including 24 children at a daycare centre.

The raid, on Wednesday morning, was carried out on foot of a search warrant based on police intelligence after officers initially received a tip-off about the unusual activities at the secret club which was unlicensed.

Amid the noise of thudding dance music, a force of Metropolitan Police Bureau officers led by Police Major General Theeradet Thamsuthee stormed the Jinling, Leela and Wip Wup Car Wash buildings at 3.30 am on Wednesday.

They quickly arrested staff found at the entrances and then moved deeper into the complex of rooms including a large open plan area and a warren of highly equipped party rooms with strobe and neon lighting strips on narrow and dark passageways.

Police discovered hundreds of mainly Chinese customers with evidence in all areas of illicit drug taking.

Police arrested 237 Chinese nationals at the complex, 111 men and 126 women in addition to 29 others who were mainly staff of the illegal establishment or personal retainers of its customers.

The Royal Thai Police is reported to be liaising with the Chinese Embassy in Bangkok and Chinese police on the mainland in relation to the arrests to find out if anyone arrested has a criminal history in China or is on a surveillance watch list.

It is not known what the immigration status of the Chinese detained is but those who tested positive for illegal drugs will have their visas revoked. It is thought that they are primarily Chinese tourists.

On Wednesday, after the raid, Police Major General Theeradet revealed that 104 of those detained at the venue had tested positive for illicit drugs including 50 men and 54 women.

These included 99 Chinese citizens, 51 women and 48 men, 3 Thai women, a Thai man and a Cambodian national.

Boss of the complex named as Mr Hai Tao Huang, had six safes with millions in cash in a drug product warehouse behind the highly unusual venue

As the raid progressed on Wednesday morning, police converged on Mr Hai Tao Huang, a Chinese national, who appeared to be running the drug entertainment emporium as he hastily tried to conceal his activities in a backroom store area.

Police were shocked to find large amounts of sachets containing a range of drugs sold to wealthy clientele at sky-high prices.

Police found six safes in the Chinese man’s lair which was a warehouse area for drugs but could only open two of them.

They found ฿1.3 million and it is estimated the venue generated ฿5 million to ฿6 million per night in illegal drug sales.

On the ground in the warehouse, they found hundreds of different coloured foil sachets of drugs in black, gold, yellow, brown, black and red.

Sachets of ketamine were on sale for ฿25,000, a sachet with a mixture of drugs called ‘Happy Water’ was ฿10,000 with a range of options including heroin, ecstasy and other psychotropic substances.

All were packaged in what looked like branded boxes.

Police, after the raid, revealed that 34 luxury cars were seized including a white Rolls Royce.

Mr Hai Tao told police that he purchased his drugs from a supplier in Pattaya which is also at the centre of this ongoing crackdown after a high profile and controversial raid by police on Sunday morning last.

Police in Bangkok are preparing to prosecute the Chinese national for drug distribution offences but are also expanding their investigation to find out who may have been providing the finance for his business.

On Wednesday, when details of the raid became clear, the Chief of Metropolitan Police Bureau Police Major General Nakarin Sukonthawit signed an order removing the Superintendent of Yannawa Police Station, Colonel Thanachot Rerkdee, from his duties and transferring him to the operations centre at headquarters.

The raid on Wednesday follows a storm of controversy centred on the nightlife industry which has broken out in Pattaya where allegations of police corruption and collusion with the operators of nightclubs and bars in the city based on the payment of ‘tea money’ has broken out.

The national police chief, General Damrongsak Kittiprapat, dispatched ‘Big Joke’ to the city and a fact-finding team to investigate the situation after a high-profile raid on Sunday morning on a large and well-known nightclub, Club One Pattaya, saw police officers blocked from entering the premises by the manager while staff encouraged and directed customers, including many tourists, to leave the scene in defiance of police requests for urine samples.

When police did enter the establishment, they found widespread evidence of the consumption of illicit narcotics with unused substances and paraphernalia left behind.

On Sunday night, after closing down the venue, police took the unusual step of mounting a checkpoint outside it after the owner lashed out and upbraided the raiding police.

Nitipat Chokchaithanaporn confronted police as they arrived at approximately 3 am on Sunday morning to search the premises where it is believed 200 people were still partying in the unlicensed establishment, well after closing hours, drinking alcohol and using illegal drugs openly.

‘I’ve invested 100 million baht. What power do you have to come to arrest me? I’m already cleared. Why doesn’t the governor come here to inspect for himself?’ Mr Nitipat shouted at police officers performing their duty.

A contrite and supplicatory Mr Nitipat apologised the next day at a hastily convened press conference together with Mr Bank Wansrithong, another manager at the large club, while going out of his way to deny having any relationship with either senior officers or politicians.

Police confirm Mr Nitipat is in hot water and facing serious money laundering charges, believed to be a front for a Chinese kingpin now being probed

Police Lieutenant General Panurat Lakboon, an assistant to the National Police Commissioner, told reporters on Monday that police have linked Mr Nitipat to the money laundering of illicit funds as a police task force now examines the beneficial owner of Club One Pattaya who they believed to be a Chinese national with links to the illicit drugs trade.

Police are reported to have taken seized drug packets found on the premises and analysed them against the fingerprints of staff and management at the nightclub venue.

The announcement of a high-level investigation has caused shockwaves in Pattaya after another assistant to the police chief, high profile policeman ‘Big Joke’ or Police General Surachate Hakparn, confirmed that the task force was looking at collusion between the club’s operators and local police in Pattaya. He warned that criminal proceedings will be taken against any officer implicated or found to have taken bribes.

The scandal is erupting in Chonburi as public anger and anxiety in the province over the Mountain B nightclub fire disaster in August which has, so far, claimed 25 lives, has led in recent weeks to a public action group calling for an inquiry into how that establishment was allowed to operate illegally in the Sattahip area of the province without police action or enquiries.

In recent days in Pattaya, evidence has emerged of video clips showing police at a social event in the city and linking this to a handwritten note showing amounts ranging from ฿10,000 to ฿30,000 written alongside the names of clubs and bars.

The furore caused by the revelation led to some club and bar owners coming forward to deny any knowledge of such payments being made while decrying the controversy that has been generated this week by the raid on Club One Pattaya as an unhelpful development for already hard-pressed business operators in the city seek to claw back profit after the resort city, famous of its nightlife, was closed for two years because of the pandemic during which it became, at one point, a darkened and deserted ghost town.

This week, however, as the crackdown on drugs and also corruption moves forward, the spotlight is on and the glare is becoming uncomfortable, particularly for some with skeletons in the closet.