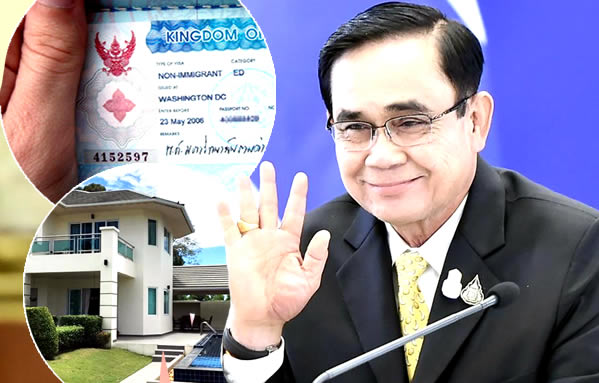 Prime Minister Prayut Chan ocha upbeat about the kingdom’s prospects as inward investment from foreign firms for the first 9 months showed a 57% improvement in value terms compared to last year with 61.5% of projects located within the Eastern Economic Corridor (EEC) in Eastern Thailand.

With surging foreign direct investment in the kingdom for the opening nine months of 2022, the Thai cabinet, on Tuesday, agreed on a measure prepared by the Ministry of the Interior, in principle which will allow the holders of a new class of long-term visa, launched in September, to own property in the kingdom in key urban centres such as Bangkok and Pattaya with a maximum land plot size of 1 rai or 0.16 hectares.

The Thai cabinet, on Tuesday, agreed in principle to proposals formulated by the Ministry of the Interior to allow a select group of foreigners the right to purchase freehold property in Thailand subject to conditions and as part of the government’s ambitious scheme, launched in September, to attract up to 1 million global citizens to come and live in Thailand while contributing 5% of GDP.

The scheme first floated, last year, by Deputy Prime Minister Supattanapong Punmeechaow is the brainchild of former JP Morgan boss in Thailand, Mr Chayotid Kridakon and has already generated a significant response with hundreds of enquiries to the Board of Investment (BOI) from countries across the world including the United States, United Kingdom, Hong Kong and China.

Recently, the government announced that a new agency would be set up to process applications for the special 10-year visa which allows holders to apply for work permits to work in Thailand without imposing quotas of corresponding Thai workers and with no need for 90-day reporting while shielding those who are resident in Thailand from tax on offshore income.

The news that the cabinet had approved the proposal came from government spokesman Anucha Burapachaisri who said that properties which the visa holders were allowed to purchase must be no larger than approximately one rai of land and are limited to key areas in Bangkok, Pattaya and other specified municipalities throughout the kingdom.

The visa programme targets wealthy global citizens with assets above $1 million who are willing to invest $500,000 in government bonds, assets or investments in the kingdom while having an annual income of $80,000 per annum.

Under the scheme, wealthy pensioners are also targeted and can have an income as low as $40,000 per annum but must invest $250,000 in the country.

The long-term visa programme allows other dispensations for workers with experience in successful international firms with a specified minimum turnover of $150 million per annum or stock exchange listed status, a high level of education as well as intellectual property rights owners and those invited to work by Thai state agencies and universities.

These groups, provided they meet the minimum income requirement, are also eligible for the long-term visa which is renewable at the end of 10 years but comes initially with a 5-year term which is automatically updated.

Before launching the scheme last month, the government reduced the processing fee for this visa to ฿50,000 or half of what was initially proposed.

The cabinet also, weeks ago, waived certain requirements on medical certification related to applicants for the long-term visa.

It was also clarified today that business investments must be in concerns approved by the Board of Investment (BOI).

On Tuesday, Mr Anucha Burapachaisri told reporters that the Long term Visa programme aims to attract ฿800 billion in investment into Thailand while generating ฿1 trillion in extra GDP before 2026.

One of the conditions imposed by the Ministry of the Interior measure is that if the required investment is withdrawn by the visa holder then all concessions, including the visa itself and ownership rights to property will be revoked.

‘The proposed scheme aligns with the government’s economic and investment stimulus plans to attract wealthy foreigners and professionals to Thailand. This is expected to help draw foreign investment and stimulate the Thai economy,’ Mr Anucha explained.

The news of the approval of the measure however was not greeted positively by all representatives of Thai industry.

Tanit Sorat, the Vice Chairman of the Employers Confederation of Thai Trade and Industry suggested that a more straightforward approach would be to grant Thai citizenship and nationality to foreign individuals with the expertise and investment capital needed to progress the government’s flagship Eastern Economic Corridor (EEC) project in Eastern Thailand.

‘Why didn’t the government consider granting Thai nationality to foreigners who can apply their technological expertise to help the nation develop high technology at the Eastern Economic Corridor (EEC)?’ he asked on Wednesday.

In relation to the Eastern Economic Corridor (EEC) project in Chon Buri, Chachoengsao and Rayong province, Mr Anucha announced, on Wednesday, that in the opening nine months of the year, approval had been given by the Board of Investment (BOI) for 376 projects accounting for a total investment of ฿246 billion, or 62% of new investment projects approved this year.

On the other hand, Mr Kriengkrai Thiennukul, the Chairman of the Federation of Thai Industries (FTI) welcomed the concession of limited property ownership rights to select foreigners who invest and come to live in Thailand, particularly retirees.

He highlighted that these would be wealthy foreigners who would contribute to the Thai economy with many of them living here after retirement and helping to attract foreign tourism.

One of the key lessons learned by the government during the pandemic crisis was the dynamic link between expats who live in Thailand and regular foreign tourism into the country linked with friends, family and the promotion of Thailand by word of mouth.

The plan approved on Tuesday was also welcomed by Thai Chamber of Commerce Chairman Sanan Angubolkul who emphasised that the move would help foster a better climate for foreign investment into the country and recalled similar efforts after the 1997 Asian Financial Crisis.

‘The scheme was successful back then in resuscitating the economy. We hope it can revitalise the property market and the Thai economy,’ he declared.

On Wednesday, the spokesman for Prime Minister Prayut Chan ocha, Mr Anucha said that General Prayut was encouraged by the higher levels of interest in 2022 from foreign investors in the kingdom.

Prime Minister upbeat about inward foreign investment trend in 2022 with over ฿400 billion in the first nine months committed across 1,247 projects

The PM highlighted the attractive nature of tax breaks and concessions offered to foreign business concerns who set up in Thailand.

He revealed that for the opening nine months, there were 1,247 projects approved with a total investment of over ฿400 billion this year.

Included in these investment proposals were 234 projects totalling ฿15.2 billion specifically designed to allow for the purchase of new technology and advanced machinery which will increase competitivity and help address the kingdom’s challenging situation with its ageing economy.

Mr Anucha told reporters that the figure for 2022 although already 17% ahead of last year in terms of certificates issued by the Board of Investment (BOI) and 57% ahead, based on actual investment, is even more impressive since last year’s figures were dominated by a huge investment linked to the power generation industry worth ฿150 billion.

The increase in the number of projects and range of firms is a very heartening trend and comes after Deputy Prime Minister Supattanapong Punmeechaow last Thursday announced a huge $5 billion or ฿200 billion investment alone over the next 15 years by US firm AWS Computing, the cloud computing arm of Amazon.

The Government House spokesman highlighted that ฿286.69 billion of the funds being invested were in targeted industries such as the automotive sector, electrical products as well as agriculture, food and petrochemicals.

96% of the funds or ฿275.62 billion came from foreign inward investment with the balance coming from domestic concerns or funding.

The leading investor countries in this category were China with ฿45.04 billion, Taiwan with ฿39.26 billion and Japan with ฿37.59 billion.

In recent weeks, the Thai cabinet also approved a tax waiver for foreign film actors and actresses working on film projects in Thailand.

Tipanan Sirichana told reporters that the scheme will help generate at least ฿3.5 billion per annum in revenue for the kingdom within the next five years in what appears to be a surge in interest from foreign film crews visiting the country.

The government sees this activity as extremely advantageous to Thailand’s foreign tourism industry and efforts to promote the kingdom abroad.

The waiver means that foreign actors and actresses working in Thailand will pay no income tax and also allows for concessions on the issuance of work permits.

In the opening eight months of 2022, Thailand saw 198 production crews generate ฿1.68 billion in revenue across a range of projects including feature-length films, music videos and high-class advertisements.