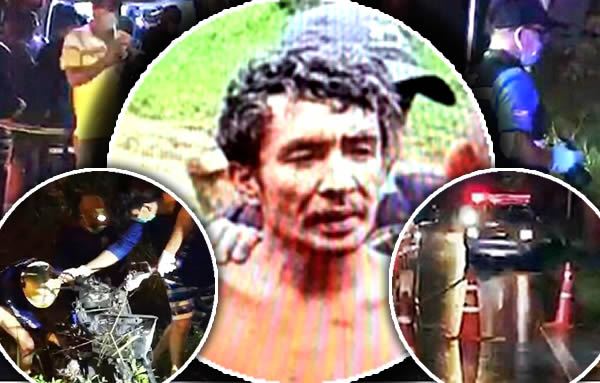 Horrific murder of three high school students in Krabi at the hands of a man, driven by drugs and road rage, shocks Thailand. On Tuesday morning, distraught parents and relatives of the three eighteen-year-olds shot dead stood around in despair trying to make sense of the latest tragedy on a Thai road.

A 42-year-old businessman is facing first-degree murder charges after being arrested by Krabi police on Tuesday morning just hours after he gunned down three teenagers following a road accident while high on the drug crystal methamphetamine. Forty-two-year-old Theerasak Boonruang shot an eighteen-year-old boy in the face and two eighteen-year-old girls in the back with his shotgun before driving off leaving their bodies beside their motorbike in flames.

Police in Krabi on Tuesday morning arrested a 42-year-old tyre shop owner in connection with the murder of three high school students in the early hours of the morning who were gunned down in what appears to be an appalling case of road rage.

The alarm was raised at approximately 1.30 am when passers-by on the Khao Phanom to Thung Yai Road in the Khao Phanom district of the province came upon a crash scene and a burning motorbike.

There, at the side of the road in a grassy area, they found the dead bodies of three 18-year-old students who were studying together at Grade 6 in Khao Phanom District School known in Thailand as Mathayom Suksa 6.

One of the victims was a boy while the others were two school girls who, it is reported, had just left the home of one of the school girls to move on to the home of another where they were to stay the night, just over an hour before.

Police have named the students, all eighteen years of age.

It is understood that it was later involved in an accident with a black BMW car driven by forty-two-year-old Theerasak Boonruang who was arrested by police hours later in connection with the atrocity.

Police have revealed that the 18-year-old boy appeared to have been shot in the face by the killer while the two girls were each shot in the left side of the back.

Passers-by were later drawn to the scene of the outrage by the flames from the burning motorbike.

The crowd that gathered later included distraught relatives and parents of the young people gunned down by Mr Theersak.

Police retrieved shell casings and parts of the BMW car at the scene before surrounding the shop house of the killer at 7.20 am after identifying his car

Police investigating the murders found parts of the BMW sedan broken off in the crash at the scene near the motorbike as well as shell casings from a shotgun.

Officers later identified the suspect as the owner of a tyre and alloy wheel shop in tambon Pheru Tiew in the Khao Phanom district at approximately 7.20 am.

Outside, they found the black BMW registered with Bangkok number plates with the driver’s side window badly shattered.

After surrounding the property of the suspect, they challenged the man to come out and speak with investigating officers.

Police then requested the man’s parents to assist in having him surrender peacefully.

The killer emerged from the shop house armed and attempted to escape through a side door before finally surrendering to police.

Inside the premises, police retrieved a shotgun together with ammunition and also observed gunshot holes within the property.

The man admitted, after some equivocation, that he had taken two crystal methamphetamine pills before leaving his wife’s home on Monday night located in tambon Khao Din before driving back to his business premises.

He said his car was involved in a collision with the motorbike causing him to exit his vehicle with a shotgun and shoot at the three people riding on it.

The accused businessman confirmed to police that the students on the motorbike were unknown to him and explained that he had not set fire to their vehicle saying it had become engulfed in flames due to the accident.

He was arrested and police are understood to be processing charges against him related to the premeditated murder of the young man and women on the motorbike.

A parent of one of the students told reporters on the dark rain-swept roadside on Tuesday morning in Krabi that she had not expected her child to die under such circumstances, at the brutal hands of a man driven by drugs to a black hearted act of road rage that wiped out three lives and futures in seconds.

Road rage is a significant problem in Thailand with regular senseless incidents that often end in murder and death where firearms are involved.

It is just another peril or precarious factor when driving on the kingdom’s dangerous roads.

Master of lies and death, the gold shop killer’s life, actions and motives probed by police as wife flees