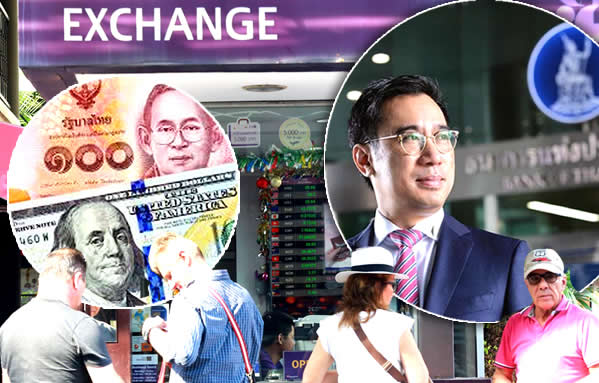 Bank of Thailand sticks to its guns and holds off on higher rate rises to protect the country’s economic recovery pushing the baht into a tailspin as it breached the ฿38 to the dollar barrier. Thailand’s borrowing rate currently stands at 1%, well below a 3% to 3.25% rate in the United States and peers in Southeast Asia.

As the Thai baht fell through the ฿38 to the dollar barrier on Wednesday, Thailand’s central bank was sticking to it its dovish and gradual approach to raising interest rates despite the more hawkish policy being pursued by the United States and the rapid depreciation of the Thai currency which has lost 19% of its value against the US currency since mid-February this year. The Bank of Thailand Monetary Policy Committee voted unanimously for a modest 25-point rise in interest rates in the kingdom to only 1%, far below those in the United States and other Southeast Asian countries.

The Thai baht surged passed ฿38 to the US dollar on Wednesday as the Monetary Policy Committee of the Bank of Thailand appeared to stick to its dovish interest policy by hiking Thailand’s borrowing rates by only 25 basis points bringing the baseline rate to 1%.

This compares to a rate of 3% to 3.25% in the United States and is significantly lower than regional peers in Asia with Malaysia for instance maintaining a 2.5% rate while rates in the United Kingdom have risen to 2.25% and are widely predicted to rise further.

Last week, the acting Thai Prime Minister Prawit Wongsuwan caused consternation at the cabinet table when he argued that the baht should not be let fall to over ฿50 against the dollar as in 1997, a statement rapidly qualified later by his aides and then retracted by General Prawit himself who accepted that in the modern era the baht’s value was a product of economic forces.

On Wednesday, the dollar to baht rate was quoted at ฿38.28 having failed to temper its slide in the lead-up to the Monetary Policy Committee meeting and its aftermath.

A statement after the meeting from the bank highlighted the ongoing growth in Thailand’s economy and reaffirmed its projection of a 3.3% GDP growth rate this year, a figure which lags behind the Asian region excluding China which the World Bank on Monday predicted would grow by 5.3% this year while China’s troubled economy, battered by a gigantic property slump, capital flight and pandemic curbs, is only projected to grow by 2.8%, only 0.5% behind the kingdom.

‘The overall growth and inflation outlook is consistent with the previous assessment,’ said a statement from the Bank of Thailand after the policy committee’s unanimous rate decision on Wednesday. ‘Thai economic recovery has continued to gain traction, driven mainly by tourism and private consumption.’

Significantly, the bank trimmed back its GDP growth forecast for 2023 to 3.8% from an earlier projection of 4.2% as a weaker world economic outlook beckons and with it, a weaker foreign tourism industry despite its continuing recovery as it becomes apparent, with lower spending, higher airfares and reduced connectivity, that a rapid rebound of the industry to its past level of performance is out of the question in the next two years.

The bank raised slightly its projection for inflation in Thailand this year to 6.3% with a projection of 2.6% for 2023.

Governor Sethaput Suthiwartnarueput who earlier this week called on the government, financial institutions and economic agencies to urgently tackle household debt as a key economic impediment for the country’s economy to grow, stated that the Thai economy will have recovered the ground lost in the pandemic late this year or early next year.

Many economists, however, predict that it will be the latter part of 2023 before this happens with Thailand only achieving growth of 1.6% last year following a 6.1% contraction in 2020 meaning the Thai economy will have lost nearly four years of potential economic growth to the pandemic emergency.

Exports to China down by over 20% in August

On Wednesday, there was some good news from economic policymakers with the Manufacturing Production Index (MPI) recorded as rising 14.52% in August from the year before in line with a 7.5% rise in exports with a 16.3% rise in output to the United States while exports to China contracted by 20.2%.