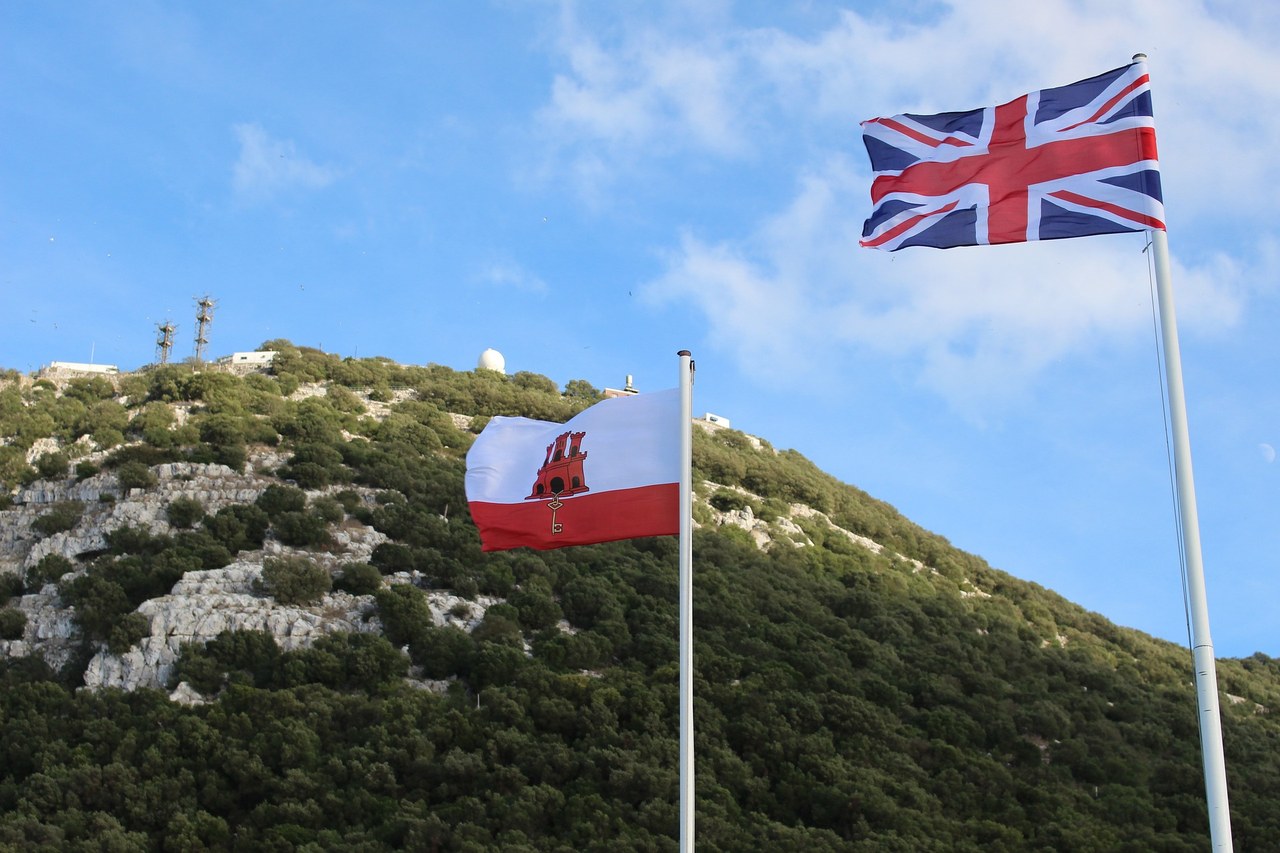 The tiny overseas British territory, Gibraltar, occupies the southern tip of the Iberian Peninsula, bordered on the north side by Spain. Its rugged coastline has been fashioned by the waves of the Mediterranean on one side and the Atlantic on the other. Street and district names represent the vivid history of this small country, while architecture, culture and cuisine have been influenced by both Europe and Africa.

The most significant and popular landmark of Gibraltar is its Rock, where residential areas have crept up the lower slopes. The Upper Rock is a nature reserve featuring a variety of interesting attractions. 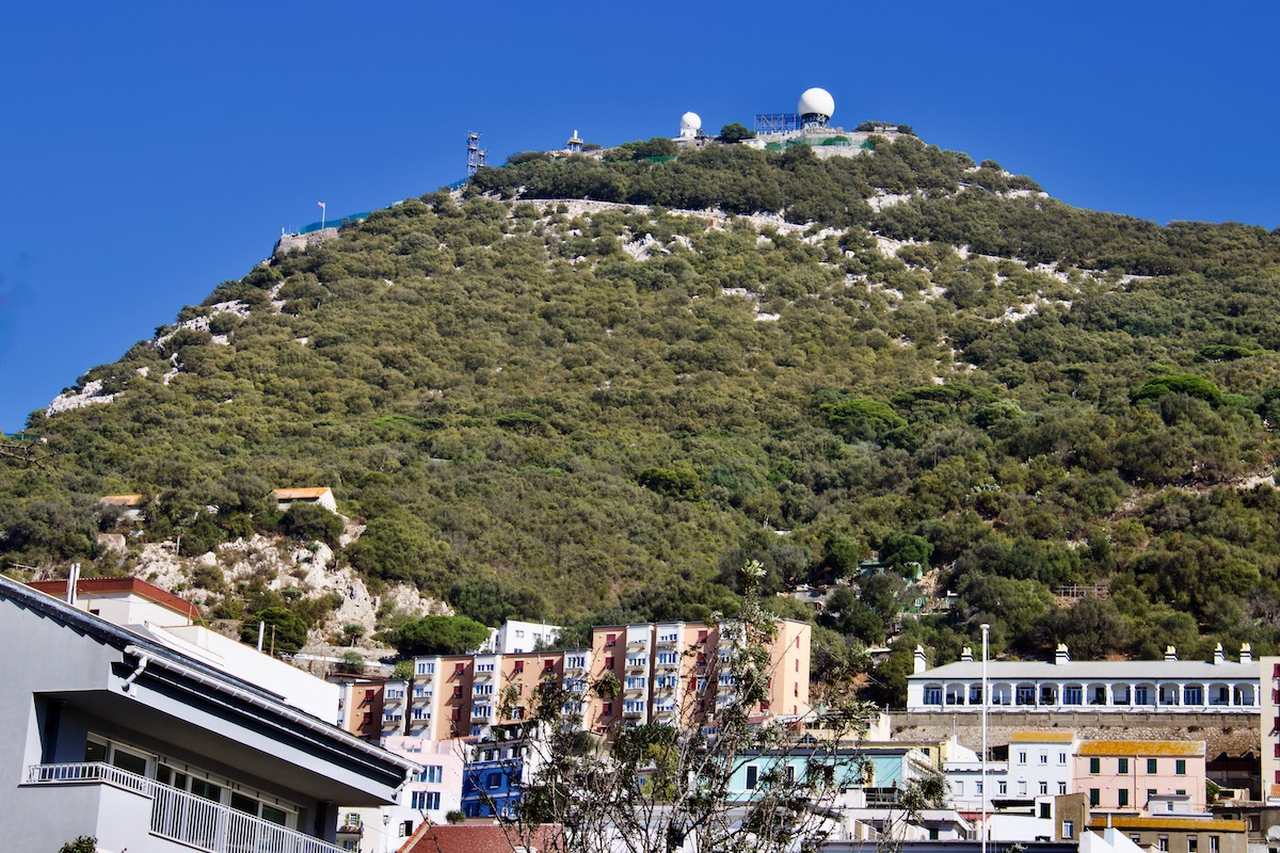 At the Upper Rock Nature Reserve, observe the wildlife, walk through historic caves and negotiate the Windsor Suspension Bridge (part of the thrill seekers’ walk).

This area is peppered with canons, guns and batteries installed when the Rock defences were strengthened to guard against possible land attacks from the north. Today these have been incorporated into a treasure trail of attractions. St Michael’s cave is one of them.

St Michael’s Cave is part of Gibraltar’s extensive network of limestone caves. This large cave comprises several chambers featuring intricately formed stalactites and stalagmites – all lit up with floodlights that change colours all the time. At regular intervals, a golden apparition appears, representing St Michael himself. 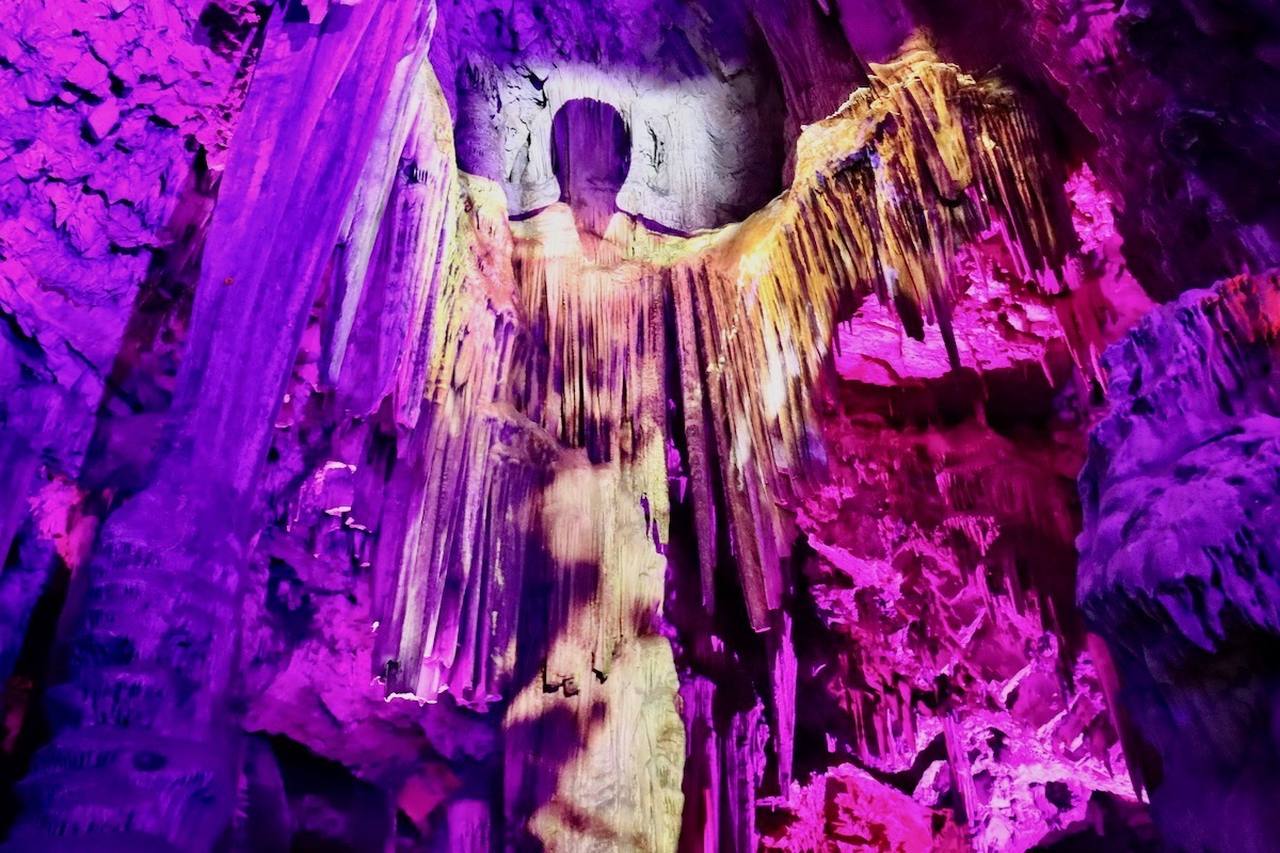 According to legend, the name comes from a similar grotto in Apulia, Italy, the Archangel Michael once appeared. Some of the many uses of this cave in the past include a shelter during raids from the sea, the Victorians held parties and picnics here and it was an ammunition store and emergency hospital during the Second World War.

The main hall or Auditorium is used for concerts and other events and the spectacular Awakening an immersive light and sound show.

During the American War of Independence, France and Spain allied with the Americans and declared war on Britain. They attacked Gibraltar first due to its strategic importance regarding the defence of Britain. To counter a possible invasion, the British strengthened the defences of Gibraltar and tunnelled into the Rock. Canons were placed in these tunnels. Despite being greatly outnumbered and a blockade of their port the governor and his men successfully defended the country.

Another highlight is the Skywalk near the peak of the Rock. It was built on the foundations of a World War II structure, and visitors have an amazing 360º panorama of Gibraltar. The Skywalk is linked to a series of trails that within the Gibraltar Nature Reserve that surrounds it. 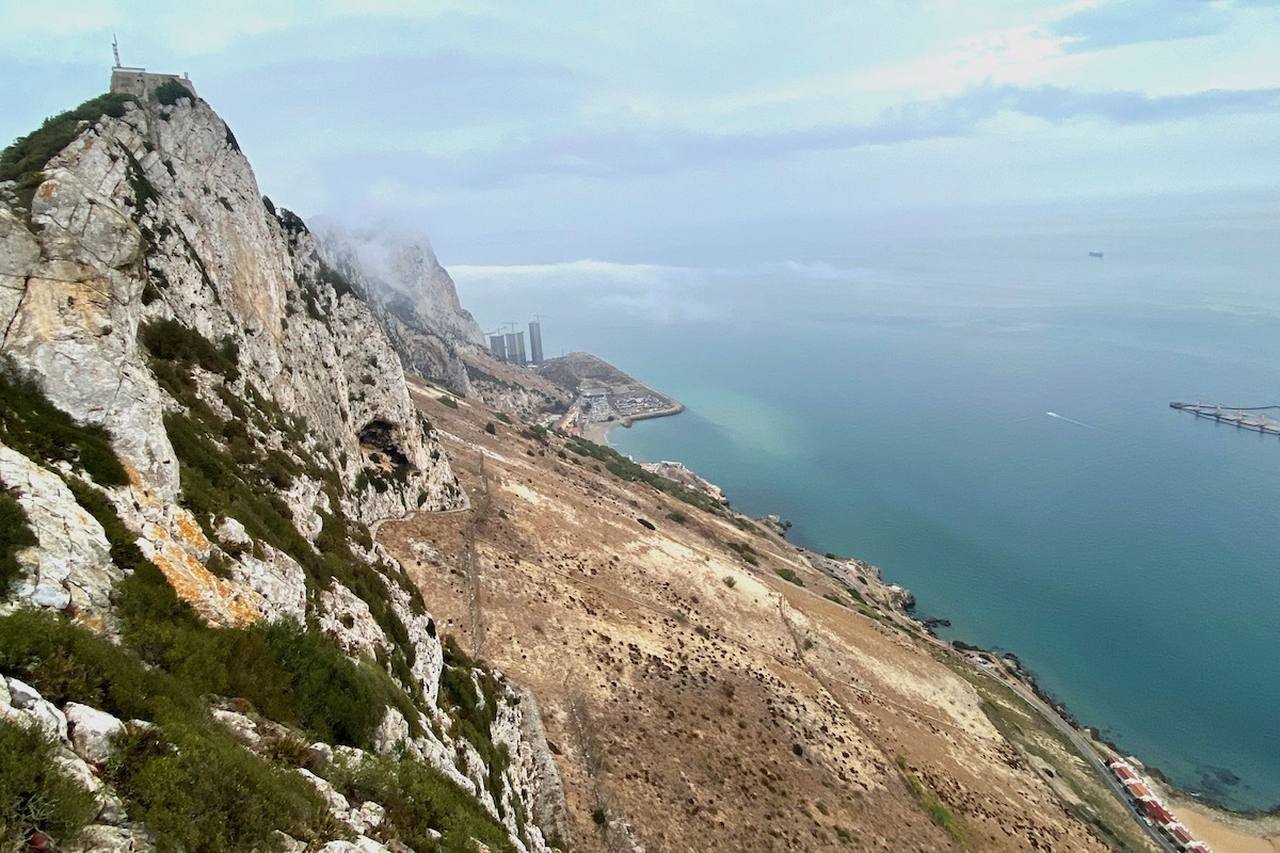 View from the SkyWalk on the Upper Rock of Gibraltar

The famous Barbary macaque monkeys generally referred to as the Barbary apes, are everywhere on the Upper Rock. Around 300 macaques are roaming freely here from nine different species. They have no shame in snatching visitors’ belongings in a twinkle of an eye. 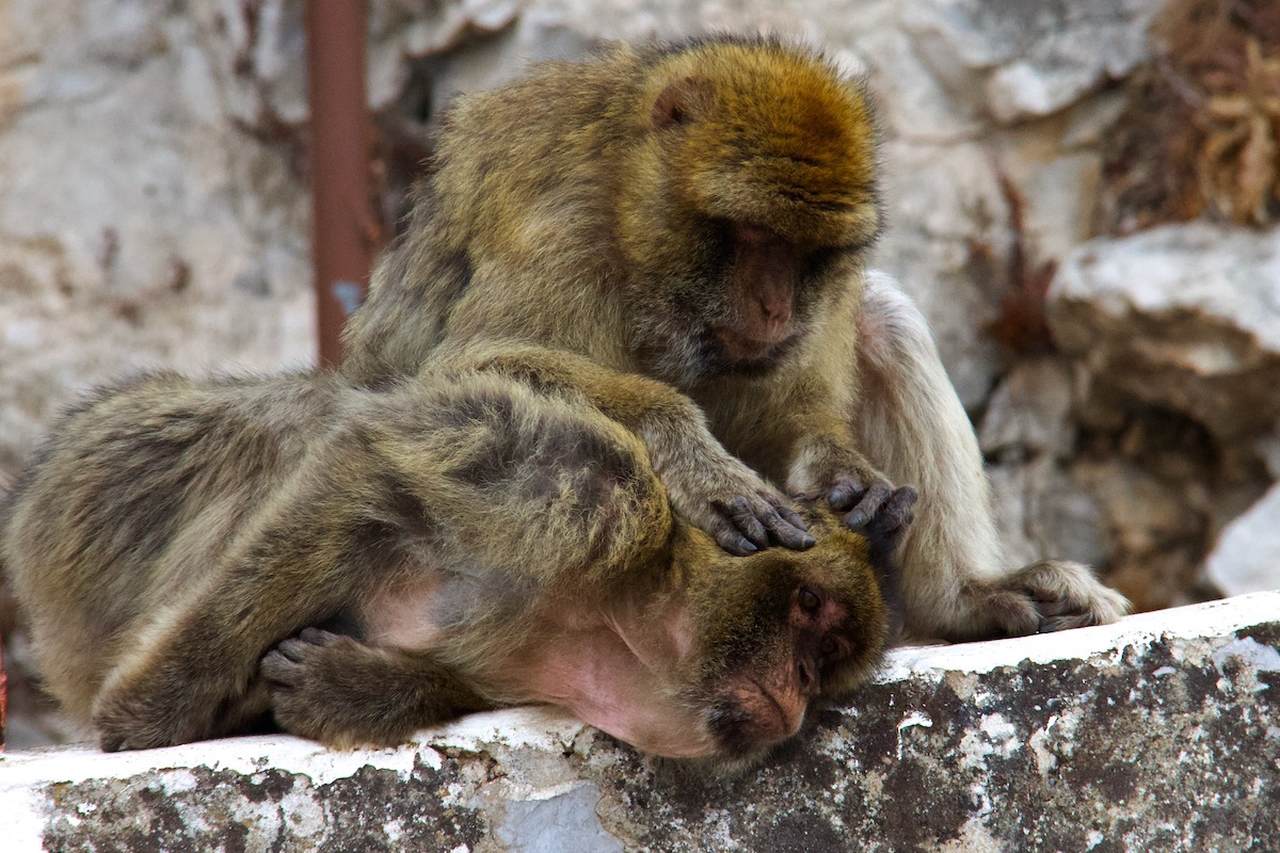 Barbary Macaques Grooming on The Rock in Gibraltar

Gibraltar’s Wildlife Conservation Park occupies a site inside the Alameda Botanic Gardens. These beautiful gardens were established in 1816 in the heart of Gibraltar to enhance public well-being. Paths and terraced flower beds were constructed using local limestone. Guns and memorials around these gardens reflect their age and the military history of Gibraltar. They are also educational as they feature collections of plants from different climates and special plants of Gibraltar. Conservation is a feature of the gardens and the wildlife conservation park inside them (entrance fee applies). 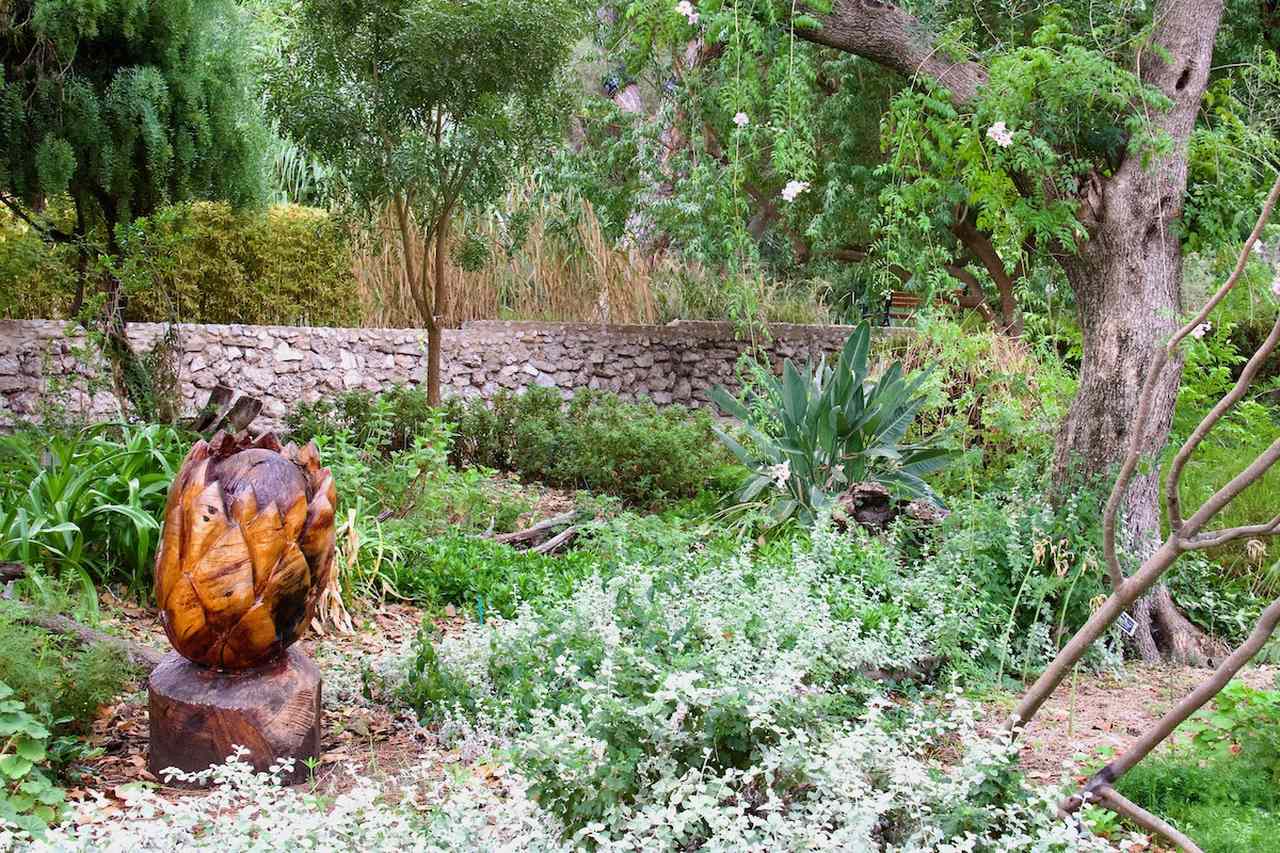 The Alameda Wildlife Conservation Park (AWCP) cares for exotic animals confiscated by Gibraltar customs, unwanted exotic pets and some native species. An important aspect of their work is raising awareness of endangered species, and the park also endangered species on loan from international zoos, for example, the Cotton-topped Tamarin. An informal layout means visitors can enjoy close encounters with the residents, including lemurs and chatty parrots. 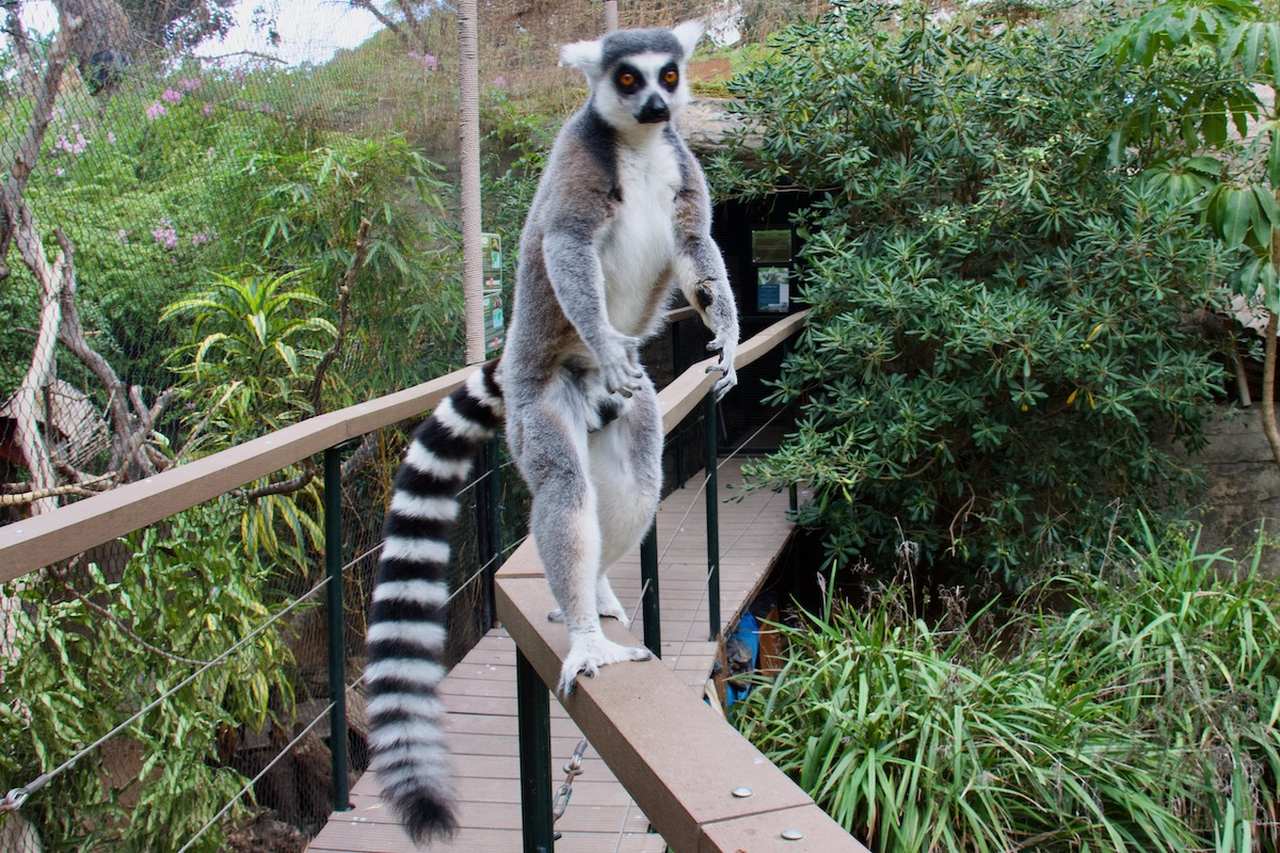 A ring-tailed Lemur at Alameda Wildlife Conservation Park in Gibraltar

A Dolphin Adventure off Gibraltar

Dolphin watching depart from the large marina in Ocean Village and the probability of sighting these fascinating creatures is very high as several pods of dolphins have made their home in the Straits of Gibraltar. They often surround the boats and swim underneath them before performing acrobatics in the air. Tuna and flying fish often make an appearance in these waters. They may also be seen out to sea by strollers along the promenade at Europa Point. 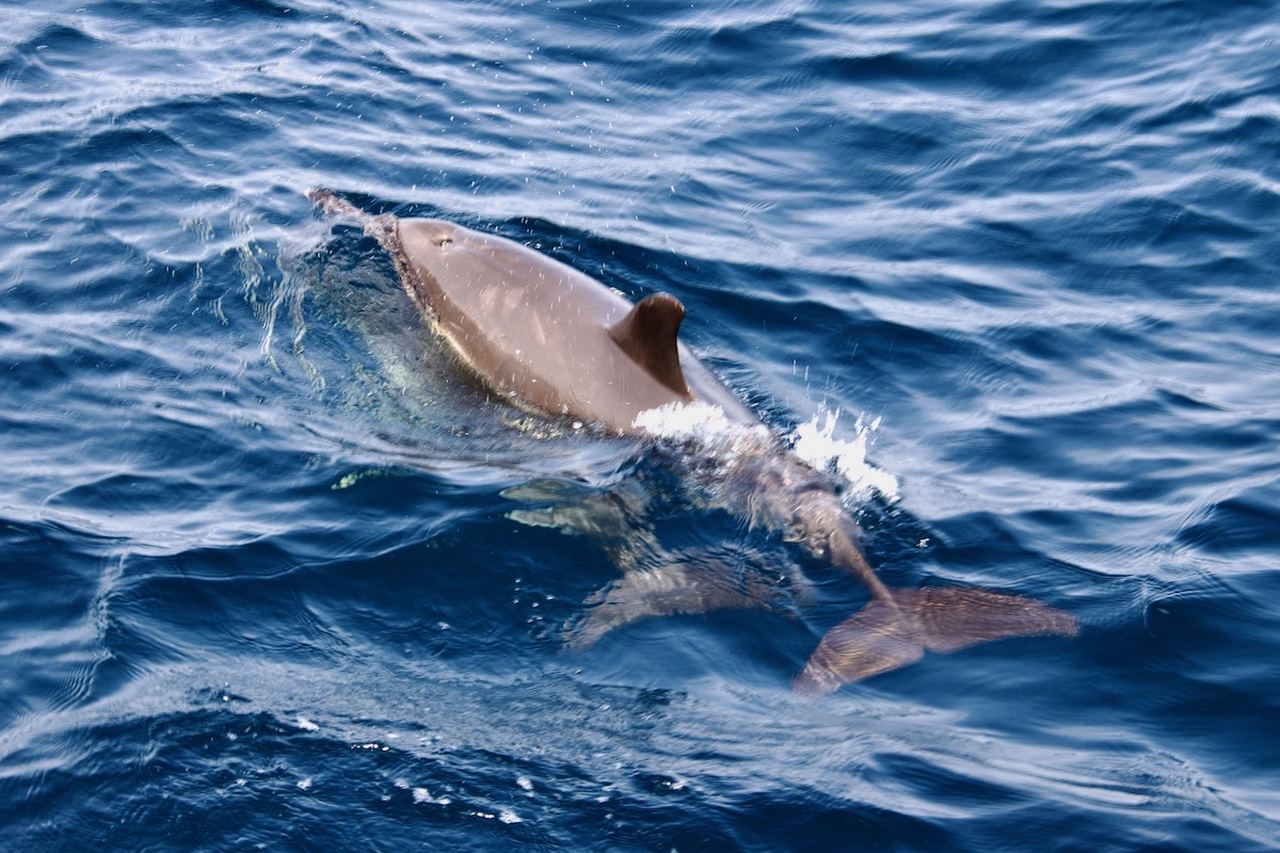 Dolphins in the Straits of Gibraltar

Europa Point is the southernmost point of Gibraltar, and from here, on a clear day, North Africa appears across the Strait of Gibraltar. Sites of special interest include a shrine, a mosque, a battery and a lighthouse. The Moors built the Shrine of Our Lady of Europe during the thirteenth century. Since its conversion to a place of Christian worship and the statue’s installation in the fifteenth century, it has undergone several restorations. Ibrahim-al-Ibrahim Mosque, built in 1997, is a beautiful example of Muslim architecture. It was gifted to Muslims in Gibraltar, mostly Moroccan, in 1997.

Harding’s Battery (aka Harding’s Fort) was constructed in the mid-nineteenth century. After being abandoned and buried by sand for many years this artillery battery was restored when Europa Point was redeveloped in 2010. The Europa Sunken Magazine was also restored and converted into a visitor centre. Built in 1841 by Trinity House at the gateway of the Atlantic and the Mediterranean, the Europa Point Lighthouse was automated in 1994. The lighthouse was re-engineered in 2016 and is now controlled from Trinity House’s Planning Centre in England. Its historic optic is on display at the University of Gibraltar. From the promenade that fringes Europa Point, there is a good view of the caves that penetrate deep into the limestone cliffs. These include Gorham’s Cave which welcomes a limited number of visitors annually.

The Gorham’s Cave site was partially excavated during the 1950s but it was not until 1989 that serious excavations began with the formation of the Gibraltar Caves Project, which is still active today. This work not only has the Gorham’s Cave Complex designated as a UNESCO World Heritage Site but has also been opened up to the public. A limited number of visitors can pre-book through the Gibraltar National Museum. This experience involves a descent down several steep flights of steps clinging to the face of the cliffs. After a short trek across a rocky shore, you arrive at Gorham’s Cave, once inhabited by Neanderthals and show the plants, birds and animals that would have been familiar to them, the food they ate and how they fashioned their stone tools. More information can be found at the Gibraltar National Museum in the old town.

The Old Town of Gibraltar

The old town is a testament to the country’s recycling philosophy – in this case, its historic buildings. Many of these have been renovated inside but the original facades have been maintained. External inscriptions and red information boards illustrate this. National Art Gallery occupies the ground floor of the City Hall. A large building that was once a family home. Numerous rooms are occupied by small galleries, most of which are dedicated to a local artist. One of these galleries displays the work of Mario Finlayson, who founded the national gallery in 1950.

Gibraltar’s National Museum occupies the Bomb House. This extraordinary structure dates back to the fourteenth century when the North African Merinid Dynasty ruled Gibraltar. Exciting evidence of this early occupation includes the remains of a fourteenth-century Islamic Batch and the remains of a well in its garden. Well-constructed and informative galleries take visitors on a stroll through the history of Gibraltar.

The Garrison Library retains its original purpose as it was built in 1793 by Colonel Drinkwater who, during the Great Siege of Gibraltar, had ‘lamented the want of a public library in Gibraltar’. Very few newspapers and other reading materials had reached Gibraltar during the siege to relieve the boredom of officers of the Garrison. 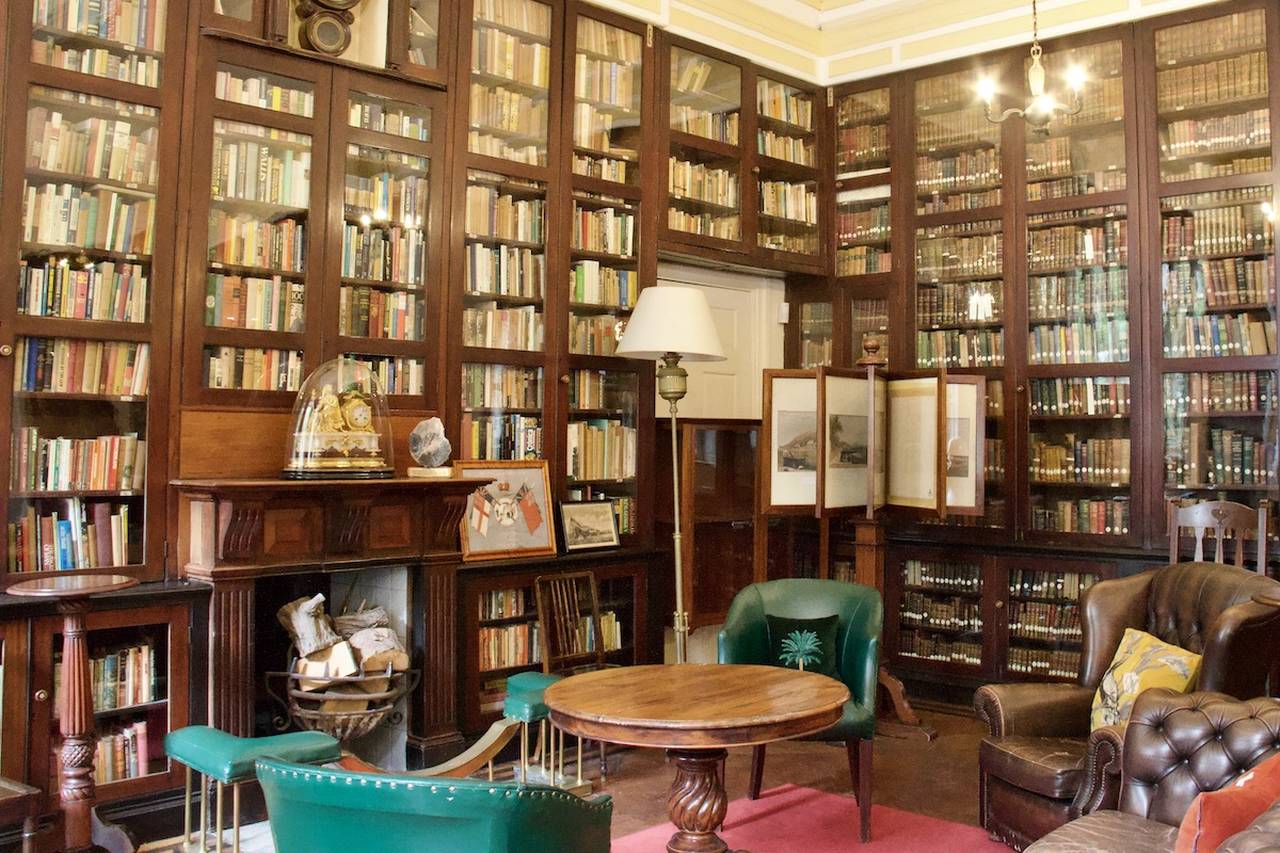 Inside the Garrison Library in Gibraltar

Private collections formed the main source of materials. Women were not allowed through the main entrance but could enter the ballroom on the first floor via a spiral staircase at the back. The Gibraltar Garrison Library remained as a military library until 2011 when it was given to the Government of Gibraltar, thereby ensuring its existence and the preservation of its collections.

Tapas, small plate snacks, are traditionally associated with Spain, which borders on Gibraltar. Literally, the word tapa means a cover, top or lid from the verb tapar, to cover.

They say the oldest goes back to the thirteenth century when King Alfonso X was recovering from an illness and was only able to drink and eat small portions at a time.  After dining in this manner, he realised this could reduce peasants’ drunken behaviour and decreed a small snack should be served with every drink. A philosophy that was later adopted during the sixteenth century by King Felipe III. But this does not explain the name. Gibraltar has developed its own tapas culture.

This Seawave restaurant overlooks the sandy beach in the pretty Catalan Bay. It is surrounded by pastel-coloured buildings. This bay was home to the original Genoese settlers. Rather than serving them on small individual plates we were given sharing platters of deep-fried calamari and octopus, goujons of Rosada fish and clams accompanied by fresh white bread rolls and washed down with a glass of cold, dry white wine.

La Terrazita situated in a shady plaza in the old town of Gibraltar, serves an interesting variety of tapas on small plates, including Spanish omelettes, Croquettes (chicken or ham), meatballs in tomato sauce and stuffed mushrooms. It also offers a montaditos that resemble tapas on bread or inside bread rolls. Montar means to mount, in other words, toppings mounted on bread. My favourite was the nidito, Spanish ham with tomato and topped with a quail egg.

The district known as Chatham Counterguard is the best place to find a good tapas bar as there is a row of them. I dined at The Chimney and enjoyed gourmet tapas, including a creamy Russian Salad, black rice with red prawns and tender baby calamari, tuna tartare with avocado and tuna Mexican tacos with pan-seared tuna chunks and smoked chipotle mayonnaise.

STAY: Sunborn Floating Yacht Hotel is moored in the marina in Ocean Village and offers a unique hotel experience. It’s close to the old town and its sun deck affords great views of the famous Rock and marina.