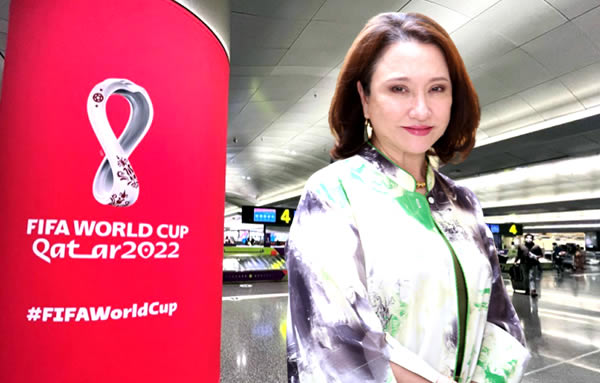 The US dollar has fallen by 3.7% against the baht in the last 3 weeks as the number of foreign tourists entering the country is ticking back up with the Airports of Thailand (AOT), this week, suggesting that numbers are at 60% of pre-pandemic levels based on taxi service demand.

A controversial decision by Thailand’s broadcasting and telecommunications authority on Wednesday paved the way for free-to-air broadcast rights to the World Cup to be purchased through public funds. The news will come as a relief to some in the recovering foreign tourism industry such as Marisa Sukosol Nunbhakdi of the Thai Hotels Association who warned earlier that any failure to have the Word Cup available to holidaymakers in Thailand would be seen as a loss for the country and the overall holiday experience for visitors in late November and early December.

Foreign tourists arriving in Thailand over the coming weeks will be able to enjoy the World Cup while on their holidays after a decision by a key state agency tasked with oversight of the country’s broadcasting and telecom industry on Wednesday.

One of Thailand’s leading tourism industry figures had already expressed concern at the prospect of the kingdom not being able to secure broadcasting rights to the World Cup which commences in Qatar on November 20th.

This is the first wintertime world cup because of its location in Qatar and excessively high-temperature levels in the summer in that country, an extremely wealthy emirate state on the Arabian peninsula with a diverse range of ethnicities and religions ruled by an Islamic elite with the Emir Tamim bin Hamad Al Thani wielding nearly all executive and legislative power.

It is also one generating a lot of controversy because of human rights concerns in Qatar where 36% of the population is South Asian with calls in many western countries from among the most ardent soccer fans to boycott the tournament, an unprecedented reaction.

In recent days, former FIFA President Sepp Blatter has described the decision to hold the World Cup in Qatar which he oversaw during his tenure, as a mistake. He has argued he favoured the United States at the time.

‘Qatar is a mistake,’ he told reporters on Tuesday. ‘The choice was bad.’

The kingdom is currently experiencing a surge in inbound passengers as the tourist sector recovers with the Airports of Thailand (AOT) estimating this week that it is running at 60% of average pre-pandemic levels for arrivals into the kingdom based on a spike in demand for taxis at the country’s main airports.

The surge in visitors to Thailand is also leading to a growth in foreign capital entering the economy at this time according to economist and former prime minister’s office minister, Dr Kobsak Pootrakool who some weeks earlier warned that Thai authorities need to be preparing for a more challenging world economy in 2023 which will see many developing countries in difficulty.

The Thai baht gained significant ground against the US dollar in the last week with the dollar’s value falling below ฿37 on Wednesday to ฿36.90 to the dollar, a value which just three weeks earlier had been higher than ฿38 at ฿38.31 to the US currency.

That represents a fall in the value of the dollar of 3.7% in that period.

In recent days, Dr Kobsak has sounded a more optimistic note on the return of foreign tourists although still not corresponding to the numbers seen before the pandemic emergency.

This is because the kingdom’s flight connectivity is still seriously impacted, resulting in higher airfares being quoted to potential travellers from western long-haul countries which are critical to foreign tourism prospects in Thailand at this time of year.

‘During the fourth quarter, foreign capital will continue to flow into Thailand. This is a result of a strong recovery from the opening of the country and the continued arrival of foreign tourists, helping to stimulate the Thai economy to turnover well,’ Dr Kobsak declared on Wednesday.

The rights to the World Cup had become a political issue in Thailand with Deputy Prime Minister and leader of the Palang Pracharat Party General Prawit Wongsuwan promising the public that the World Cup will be available on free-to-air terrestrial TV for all in Thailand to watch.

On Wednesday, the National Broadcasting and Telecommunications Commission (NBTC) indicated, after a meeting of its commissioners, that the rights will be secured for Thailand but it is understood two commissioners objected, on public policy grounds, to the use of scarce financial resources, reported to be up to ฿600 million to pay for the rights to air 64 matches from November 20th until the competition draws to a conclusion on December 18th.

These funds had been earmarked in the agency’s budget for research.

A further ฿1 billion will have to be found by the Sports Authority of Thailand, a state enterprise in the kingdom charged with promoting and developing sporting activity.

The move to purchase the broadcasting rights through state agencies had also been opposed by the progressive Move Forward Party on the basis that the populist move was a waste of public resources.

Meanwhile, the President of the Thai Hotels Association, Marisa Sukosol Nunbhakdi made it clear that access to the World Cup by international foreign tourists would be considered essential during their holidays in Thailand and failure to secure the rights required would be a setback for the foreign tourism industry.

‘As the tournament is a month-long event, if Thailand fails to secure the licence, a number of tourists won’t be satisfied with the experience during their trip. We are now waiting for a conclusion from the related authorities,’ she disclosed in advance of the latest decision on Wednesday which appears to suggest the rights will be secured although full details have not yet been confirmed.

The concerns raised by the Thai Hotels Association President, however, were downplayed by Mr Suksit Suvunditkul, the president of the southern chapter of the key representative body of hotel owners.

‘There will be guests who will be disappointed if they have to miss the World Cup, but it will not impact overall sentiment as the majority have already planned their trips without taking this point into consideration,’ he pointed out.

He stated that the biggest losers if the rights were not available, would be bars and entertainment venues that put on special promotions and use the World Cup as a crowd puller.

He also suggested that many outlets would find ways to access the matches for their customers through online streaming services in a new more fragmented digital and media world.

Mr Suksit, however, said he was far more concerned at the continued lack of flight connectivity between Thailand and its major foreign tourism markets.

He pointed out that currently, in November, Thailand has somewhere between 180 and 200 incoming flights per day compared to 450 before the emergency or between 40 to 44% of pre-pandemic levels.

This coincides with figures given recently by Yuthasak Supasorn, the Tourism Authority of Thailand (TAT) chief who estimated that a figure of 40% of the 2019 flight connectivity level would be achieved by the end of the year from 33% in the summer.

Mr Suksit also revealed that for Phuket and the Phuket International Airport, the big driver of foreign tourism at this time were Russian tourists with 11,464 arrivals in the week up to November 7th followed by India from where the holiday island received 5,383 foreign tourists.

Russian visitors are being flown primarily on chartered flights although they are also travelling on scheduled flights routed via the Middle East.

Foreign tourists staying at home because of high fares

In Pattaya, Mr Thanet Supornsahasrungsi, the acting President of the Chonburi Tourism Council, took a different view on the forthcoming World Cup.

He suggested that it was simply another impediment in attracting visitors from long-haul markets until it finishes on December 18th which is just a week before Christmas.

‘If football fans have to pay a 2 to 3 times higher price for air tickets and have to risk missing the live broadcast, they would rather stay at home this winter,’ he reasoned.