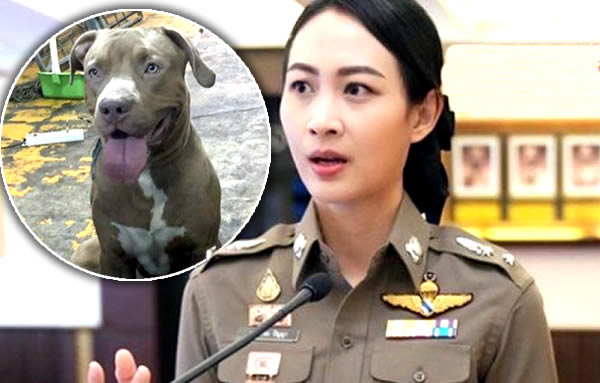 Thai law imposes duties on the owners of dogs to keep them under restraint at all times. There is growing concern about the spike in incidents linked to pit bull dogs in Thailand with a long list of deaths and horrific injuries linked to the breed or crossbreeds of this type of dog.

The Royal Thai police, on Saturday, issued a warning to all dog owners in Thailand especially those who own pit bull breeds to meet their legal responsibility to treat the dogs properly while making sure to exercise control and restraint over them after a dangerous incident at the end of October and several deaths and horrific attacks in recent times.

Thai police have issued a warning to dog owners in the kingdom that they may face stiff civil and criminal penalties for failing to properly care for animals and ensure that they are not a danger to others.

A media briefing was given on Saturday by Police Lieutenant Colonel Ying Naphawan Panya, a deputy police spokeswoman.

It followed an incident in Samut Songkhram province on the Gulf of Thailand southwest of Bangkok on the afternoon of October 29th in which two pitbull dogs attacked their owner and posed a danger to others.

Police investigating the case found that it was not an isolated event and that the dogs had repeatedly targeted the owner.

This was due to neglect opening him up to both civil and criminal penalties.

The police spokeswoman drew attention to Section 377 of the Thai Criminal Code which provides for a term of imprisonment of up to one month and a ฿10,000 fine for any owner who fails to restrain potentially dangerous or ferocious animals.

However, if the animal causes injury to others, the owner may face up to three years in prison and a fine of up to ฿60,000 under another section.

Other criminal code provisions could see the owner of an animal that causes the death of another person through negligence face up to 10 years in prison.

Police Lieutenant Colonel Ying Naphawan Panya also drew attention to the provisions of the Cruelty and Animal Welfare Act 2014 which imposes civil penalties for the mistreatment of animals and makes any owner responsible for damage caused by them.

The policewoman pointed out, for instance, that when dogs are involved in an accident with a car on a public road, the owner of the dog is strictly responsible for damage done to the car under Thai law.

This is also covered by the Thai Road Traffic Act.

Owners are responsible for the restraint and control of their dogs at all times.

67-year-old man dies in Nakhon Ratchasima after being attacked by pitbull dogs, normally kept in cages

There is a long and disturbing history of pitbull-type dogs, often crossbreeds, attacking and causing injury to their owners and others in Thailand.

Just 6 days before the Samut Songkhram incident, on October 23rd, in Nakhon Ratchasima province, emergency services were called to a home in Prakob Pattana just after midday where a 67-year-old man, Boonserm Muang-iam, was found with bites all over his body.

He was bleeding profusely from severed veins in his right hand.

Rescue service workers found that the dogs had been corralled back into their cages when they arrived.

Four of them were mature dogs while the other three were puppies.

One of the mature dogs was the mother of the three puppies while there were two other female dogs and a male.

Never attacked before said the son

On admission to nearby Maharat Nakhon Ratchasima Hospital, Mr Boonserm was declared dead.

His son who arrived at the scene an hour later said that the dogs had usually been kept in cages.

He thought that his father may have tried to stop them from fighting and that one of them turned on him.

He told police investigators that the dogs had never attacked anyone before.

In May, an 8-year-old girl was mauled severely by a family pet who she disturbed while playing at home

In May, an 8-year-old girl, Apichada Khampan, received severe injuries when she was mauled by a mixed-breed pitbull who suddenly attacked her biting her head and hands.

The dog in question was the family pet Cola who had been resting near the washing machine in the house while the little girl was entertaining herself with skateboarding antics. This prompted the dog to attack

Her father, Wirat Khampan found Apichada sitting on a bucket covered in blood. She had two bites on her head and her hands were chewed very badly.

Mr Wirat said he had taken the dog from a previous owner who died many years ago and that he had never been violent up to that point.

In September, Thai rescue workers struggled to remove an aggressive pitbull from its female owner in the Mueang district of Nakhon Ratchasima after the pet of nearly 6 years turned on her.

The pitbull, named Nazi, attacked his 60-year-old owner, identified by police as Ms Supaporn when he observed her feeding stray dogs nearby.

After the jealous dog was eventually detached from his owner, she was left lying on the ground with gaping wounds on her neck and arm with severe blood loss.

In April 2021 in the Bang Lamung district of Pattaya, it was a similar story when a 2-year-old dog named Giant raised by its owners since he was three months old, turned on him while he slept.

The man was rushed to a local hospital in the resort city where he died shortly afterwards from severe blood loss and trauma.

The dog had been sleeping with his owner when he awoke suddenly and began to attack him furiously while the man was still unconscious.

It took experts from the Chonburi Pit Bull Club to put the dogs to sleep temporarily with medication to subdue him after the event while his owner succumbed in hospital shortly after admission.

Thailand this year is battling another deadly threat – rabies. For now its is under control but it requires action