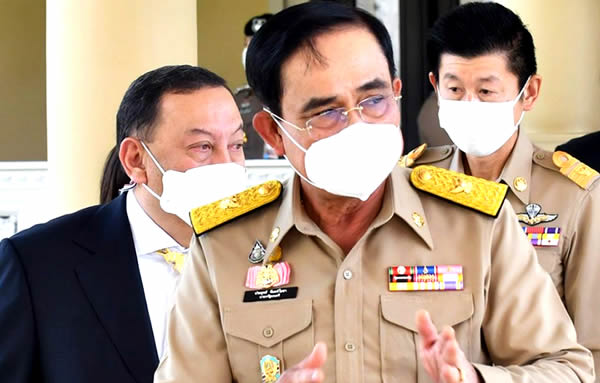 Political expert says Prayut should have resigned as Prime Minister on August 24th and bowed out with dignity as his future path to power in 2023 is highly uncertain. It comes as the country faces into a period of political uncertainty with the dissolution of the house on the cards and, as yet, no confirmation of what will be the basis for the next General Election.

There is growing speculation that Prime Minister Prayut Chan ocha will announce the dissolution of the House of Representatives on December 24th, sometime after the Asia-Pacific Economic Cooperation (APEC) Summit in Bangkok finishes on November 19th. The development would leave the kingdom facing questions as to when and on what basis the General Election will be conducted sometime in early 2023. The ultimate fate of General Prayut is also murky as his future position is uncertain as the ruling party which is facing difficulties in the polls and the threat of dissolution, is unlikely to nominate him as the first choice for prime minister when a newly elected House of Representatives convenes in 2023.

Thai Prime Minister Prayut Chan ocha held an unscheduled meeting with his two ‘brothers in arms’ Deputy Prime Minister Prawit Wongsuwan and Minister of the Interior Anupong Paochinda on Monday morning at approximately 9.30 am at a lounge in Government House just before a high-level meeting, called to discuss plans and co-ordination for the forthcoming Asia-Pacific Economic Cooperation (APEC) Summit to be held in Bangkok on November 18th and 19th.

It is believed that a conference between the key leaders in successive Thai governments since 2014 discussed the prospect of General Prayut dissolving the House of Representatives as a prelude to the General Election early next year.

On Monday, sources at Government House speculated on December 24th as a possible date for the house dissolution.

It has long been reported that General Prayut will announce the dissolution after the conclusion of the Asia-Pacific Economic Cooperation (APEC) summit in November.

The prospect of a General Election early next year is fraught with uncertainty as organic election laws are currently before the Constitutional Court which is examining the passage of the bills in parliament which occurred under controversial conditions with the absence of a quorum in the house, meaning that the initial version of the bill was accepted and processed forward by default.

This version, with a twin ballot and a simple division of party list votes nationally across the 100 seats available, would, it is understood, work to the advantage of the leading opposition Pheu Thai Party.

Election laws may be replaced by executive decrees, unlikely to enact the new laws if rejected by the Constitutional Court which will rule in January

However, if the bills are rejected by the court and the House of Representatives is dissolved, the only basis for the next General Election to take place will be through the use of an executive decree or resolution which, given political considerations and low public support for the parties in the ruling coalition, is unlikely to be based on the new electoral laws.

The Constitutional Court is expected to rule sometime in January 2023 on the new electoral laws.

If the laws are rejected, the replacement enacted by government order is more likely to be a process based on the rules adopted for the last General Election.

Pheu Thai Party in the most recent NIDA poll had 34.4% support, well ahead of any other political party

The results of a quarterly National Institute of Development Administration (NIDA) opinion poll on the state of the parties at the end of September showed the Pheu Thai Party with 34.4% of the vote with the Move Forward Party maintaining a support base of 7.56%.

The Move Forward Party fared better in a poll, published on Sunday, showing the progressive party was the most popular in Bangkok with 28.5% support followed by the Pheu Thai Party on 26.45%.

Its leader, Pita Limjaroenrat, was the favourite for prime minister in the capital with 20.4% compared to 15.2% for General Prayut Chan ocha who came in second place.

The national poll at the end of September showed a marked decline from higher ratings at the end of June for the leading two opposition parties when combined with the Thai Sang Thai Party of Khunying Sudarat Keyuraphan.

The latest poll showed the ruling Palang Pracharat Party which nominated General Prayut Chan ocha as the prime minister in 2019, on only 5.56% with the Bhumjaithai Party polling only 2.3% with the Democrat Party, which appears to be enjoying robust political support at 7.56%.

Another key question that is emerging is the future of General Prayut as it is becoming increasingly clear that members of the Palang Pracharat Party want to nominate their leader, General Prawit Wongsuwan, as prime minister in his stead after the next General Election.

General Prayut, along with Minister of the Interior Anupong Paochinda, has long stood aloof from the political party system, something that may stand to their advantage if the Palang Pracharat Party runs into difficulty following allegations last week that it accepted a ฿3 million donation from a wealth a Chinese benefactor who later obtained Thai citizenship.

The matter, at the behest of constitutional activist Srisuwan Janya, is currently being investigated by the Election Commission and the Registrar of Political Parties and could, conceivably, see the ruling party dissolved if it is found that the donation breaches key sections of the law governing political parties.

Section 72 prohibits and sanctions the acceptance of money from ‘grey’ sources linked to illegality while Section 74 outlaws accepting donations from foreigners or Thai firms with significant foreign interests.

The Palang Pracharat Party itself has confirmed the donation from the businessman who has also been linked to an illegal nightclub raided by police last Wednesday morning.

Over the weekend, he vehemently denied such claims and threatened to issue proceedings against media outlets that promoted them.

General Prayut may be nominated by a new party formed by an ex-aide, it’s mooted but needs votes

General Prayut was cleared by the Constitutional Court on September 30th to serve until the 6th of April 2025 under Section 158 of the 2017 Constitution which limits a prime minister’s term to a maximum of 8 years.

However, his pathway to becoming prime minister again after the next election is anything but clear with speculation that the newly created Ruam Thai Sang Chart Party (RTSC) may nominate General Prayut for prime minister in parliament if the party can meet a threshold of 25 seats.

Section 159 of the 2017 Constitution specifies that a party must have 5% of the 500 seats in the House of Representatives to be able to nominate a candidate to lead and form a government.

Over the weekend, speaking with the Bangkok Post, Yutthaporn Issarachai of Sukhothai Thammathirat Open University suggested that it is likely that General Prayut will end up being the Palang Pracharat Party’s second choice behind Deputy Prime Minister Prawit Wongsuwan.

However, the political analyst felt that the new Ruam Thai Sang Chart Party (RTSC), founded by a former aide to the prime minister, Seksakol Atthawong, was the most likely outcome as the current government leader will not give up easily.

‘I’m leaning towards General Prayut staying on in politics. And it’s likely that he will part ways with the PPRP because we’ve seen new parties emerge. RTSC is a party to watch and it may nominate Gen Prayut as prime minister candidate,’ he explained.

Prayut should have gone in August with dignity

The problem for the prime minister is that the new party is unlikely to gain 25 seats in its first electoral outing thus leaving him with no other option but to retire from politics, particularly as his popularity is in decline and there is a thirst for more representative political actors.

‘My suggestion is that he should quit politics and resign from the post, which will be a graceful exit. He should have stepped aside on August 24th. So, he should wash his hands of politics after this. He should not stay, even as an MP,’ said Mr Yutthaporn.