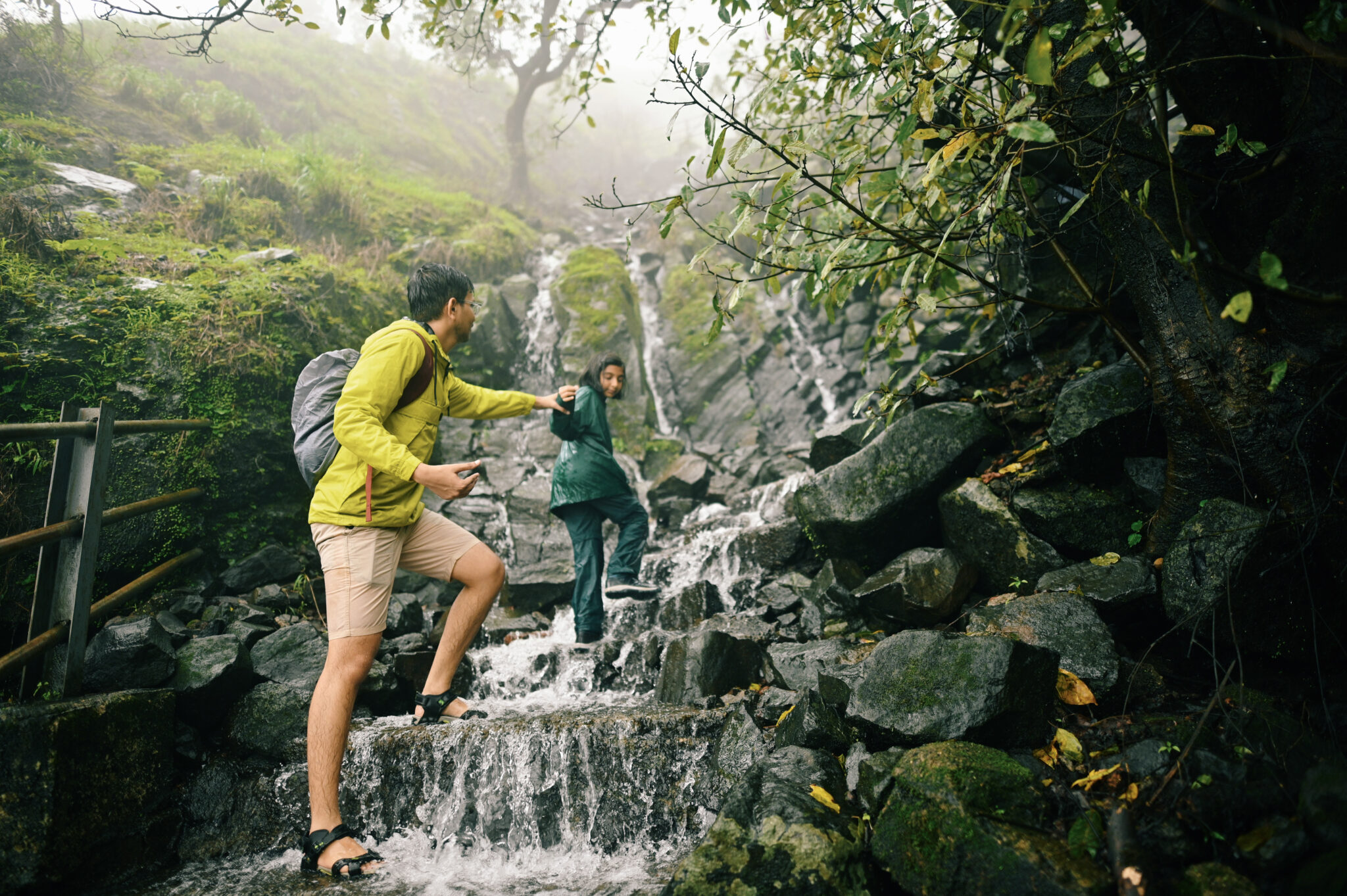 Indians are a nation of curious travellers, as revealed by new consumer research by KAYAK with two-thirds (64%) of Indian travellers stating that they are willing to cut back on day-to-day expenses to allow them to see the world in 2023*.

The KAYAK research conducted by YouGov, surveyed over 1,900 Indian travellers, and found that travel restrictions resulting from the pandemic have contributed to the current surge in travel appetite, with three-quarters (78%) of respondents being excited to go back travelling in 2023*. Exploring the world (62%) was mentioned as the main reason for the regained Indian travel desire, followed by living their dreams (61%), seeking thrills (55%), finding themselves (48%) and escaping their worries (43%).

60% of those surveyed consider themselves curious travellers. Curiosity also makes for more enriching experiences, as 75% of respondents also quenched their curiosity by usually exploring new and offbeat destinations.  73% mentioned that they discovered new food experiences when travelling, and 70% met new people and made friends from different cultures during previous trips.

Elia San Martin, VP & GM of APAC at KAYAK, remarked, “Our deep dive into traveller curiosity led to exciting findings. Indian travellers are looking to not only spend more on holidays but are wholeheartedly embracing adventurous excursions, whether it is trying local cuisines, being immersed in new cultures, or exploring lesser-known locations. Our data shows that Indian travellers are highly curious about enriching their travel memories, and this is reflected by a 204% increase in flight searches for next year**. They are embracing the opportunity to travel the world again, while consciously searching for great deals and sustainable travel choices.”

Costs and sustainability a key consideration for Indian travellers:
While almost half (49%) of those surveyed plan to spend more money or the same for their travels than pre-pandemic,  value for money supersedes all other factors, with over 60% of the surveyed Indian travellers counting it as their top consideration for booking flights and hotels, and 80% looking to spend INR 4 lakhs or less for travel in the year 2023.  This is followed by hygiene and flexibility in booking considerations.

Sustainability considerations are also important for Indian travellers’ holiday plans, with 43% of respondents stating that sustainability will be one of the main criteria for their summer holiday in 2023. Furthermore, 40% plan to travel to destinations known for their sustainability. Inspired to plan trips that have a minimal impact on the planet and its resources, 48% of Indian travellers surveyed will book eco-friendly accommodations while 44% will opt for more sustainable modes of transportation.

“We believe in the power of travel and want our users to experience the world through travel, in a more sustainable and cost-effective way. Our unique travel planning tools can help travellers make fact-based decisions. For example, one tool we offer is the “Least CO2”-sorter, providing insights on a flight’s CO2 emission and helping to compare cost and travel times easily.” stated Elia San Martin, VP & GM of APAC at KAYAK.

Social media and the rise of solo travel
With travel topping the 2023 to-do lists for a majority of Indian travellers surveyed, 77% have noticed more people posting their holiday pictures on social media in the past 12 months. Interestingly, ‘me time’ is becoming a consideration for Indian travellers, with 38% saying they prefer to travel alone rather than in a group in 2023. Greater control, freedom, and flexibility in planning holiday itineraries could be major factors that drive solo trips. 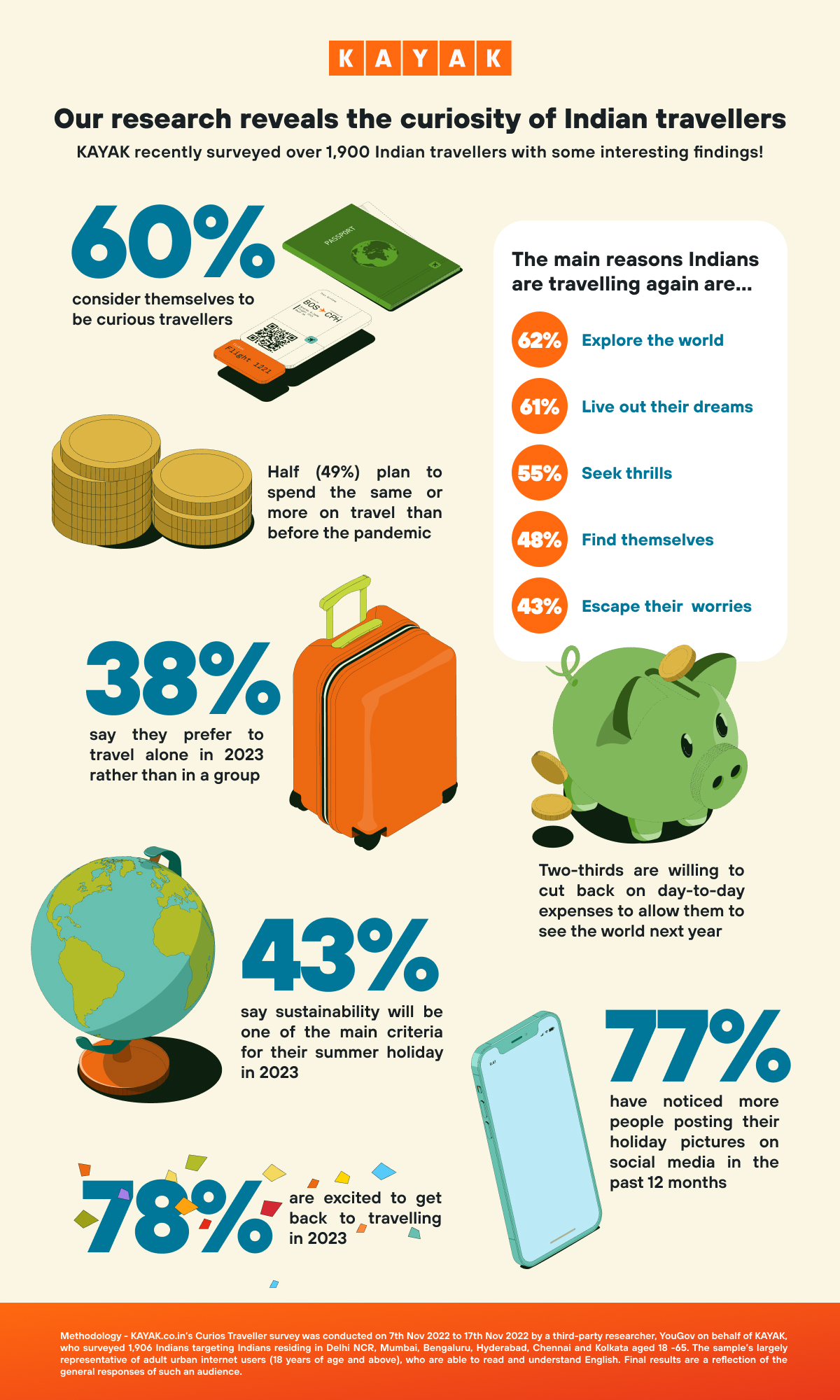 Despite value for money being their number one consideration for their 2023 holidays, Indian travellers do not appear to be deterred by higher flight prices in 2023, which, compared to 2019, have increased by about 23% for international flights and by about 66% for domestic flights**. The average cost of a return economy domestic flight for 2023 is about INR 13,783, and about INR 85,631 for a return international economy flight**.

KAYAK.co.in search insights for top destinations for Indian travellers of 2023
With more Indians searching for flights this year than pre-pandemic, international travel is back on the cards for many in 2023. Dubai remains the most searched outbound destination for travel in 2023, while Bangkok, Bali and Maldives also feature high on the list. Goa was the most searched domestic destination, followed by Andaman & Nicobar Islands and New Delhi.