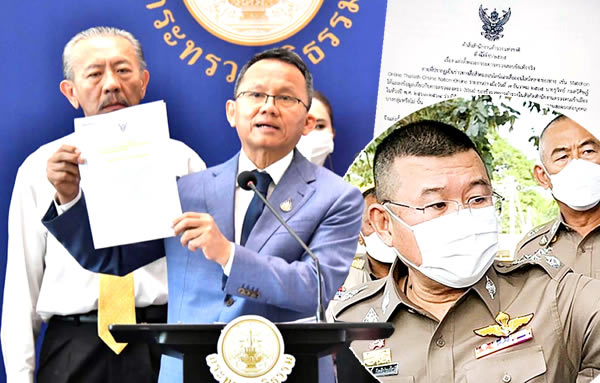 Minister Somsak Thepsutin praises former massage parlour boss and politician Chuwit Kamolvisit for his work in pursuing corruption concerning this unfolding case. Mr Chuwit has promised not to keep the 5% of the billions seized that the minister says he’s entitled to but has expressed concern about the limited charges brought against Mr Du Hao or Mr Chaiyanat Kornchayanant and his most senior associates including the absence, as of yet, of money laundering charges.

A top-level panel has been established by the National Police Commissioner General Damrongsak Kittiprapat to investigate top officers within the Immigration Bureau based on substantiated claims made by former politician Chuwit Kamolvisit that Chinese nationals entering Thailand on tourist visas were subsequently able to obtain extended student or Non-Immigrant visas through a network of corrupt schools. The probe, launched on Thursday and which will take up to 15 days to report, is focusing on three senior officers within the service with the rank of general. Meanwhile, Deputy National Police Chief General Surachate Hakparn who is leading the police task force investigating the Chinese gangs and in particular, the former empire of Du Hao or Mr Chaiyanat Kornchayanant, has assured whistleblower Chuwit Kamolvisit that the police will successfully prosecute the matter to the end. His remarks came after Minister of Justice Somsak Thepsutin, on Friday, confirmed that over ฿3 billion of the Chinese kingpin’s assets have now been seized by the police unit in addition to a further ฿1.13 billion seized earlier by the Office of the Narcotics Control Board (ONCB) and that Mr Chuwit was entitled to 5% of the proceeds as a whistleblower.

The National Police Commissioner General Damrongsak Kittiprapat, on Thursday, signed an order creating an official fact-finding committee to investigate three senior officers within the Royal Thai Police at the rank of general regarding serious and substantiated claims made by former politician and social activist Chuwit Kamolvisit relating to the activities of Chinese triad gangs in Thailand and, in particular, the activities of Mr Chaiyanat Kornchayanant or Du Hao as he is known in the Thai media.

The claims centre on the activities of certain Immigration Bureau offices in Thailand and the ability of a large number of Chinese nationals to be able to live and work in the country from early 2020.

The allegation made by Mr Chuwit suggested that Chinese tourists had been able to convert tourist visas to non-immigrant visas and in particular student visas otherwise known as Non-Immigrant ED visas after arriving in Thailand.

The matter is also being looked at by Police General Surachate Hakparn who is leading the task force pursuing the extensive business, property and financial dealings of Du Hao or Mr Chaiyanat Kornchayanant who, on Friday, also commented on the fact that two of the senior officers being probed are former cadet classmates of his.

General Surachate Hakparn assured reporters when questioned about this that it would have no bearing on the investigation before him and his officers.

The top cop, known in Thailand as ‘Big Joke’, has pledged repeatedly since this case broke that police will follow the evidence wherever it leads and arrest anyone found to be culpable.

The order signed by the police commissioner on Thursday is Royal Thai Police No. 581/2565 establishing the 9-member panel.

Members of the top brass participating in the investigative committee include senior officers with the Office of the Inspector General and the Civil Service Inspectorate.

The panel is tasked with reporting to the police chief within 15 days from December 8th.

Meanwhile, Mr Chuwit Kamolvisit who this week was praised by Minister of Justice Somsak Thepsutin, appeared with him on Friday as the minister announced the seizure of ฿3.02 billion worth of assets linked with the Du Ho investigation.

Earlier, the minister had suggested that Mr Chuwit deserved great credit for his fearless campaign to uncover corruption and expose the criminal activities of the triad gangs.

He also confirmed that Mr Chuwit may be entitled to 5% of the proceeds of such seizures but the former politician is reported to have said he would prefer that the money goes to Bangkok hospitals for the benefit of the less well-off.

The minister outlined the scale and nature of the assets seized from the crime empire of Mr Chaiyanat Kornchayanant as comprising 39 rai of land, nine buildings with 375 rooms, all luxuriously decorated, as well as extensive resort grounds.

The assets seized by the police task force also include nine luxury cars including a Bentley Continental GT.

The minister said the value of assets seized was based on current market estimates and thanked the Department of Land for its cooperation with investigators and the task force.

These seizures, the minister pointed out, are in addition to the ฿1.131 billion seized by the Office of the Narcotics Control Board (ONCB) also announced by the ministry this week.

Justice Minister Somsak used the opportunity to point out that any citizen, just like Mr Chuwit, can supply information to the Ministry of Justice and in so doing be eligible for a reward of up to 5% of the assets seized where a criminal network is exposed as in this case.

He revealed that the ministry was currently working on an informant or tip line to be implemented by the Department of Special Investigation (DSI) which would use blockchain technology to provide full security for whistleblowers.

The facility is being developed by the King Mongkut Institute of Technology in the Lat Krabang district of Bangkok and is expected to be online in January.

Mr Chaiyanat Kornchayanant was arrested on Wednesday 23rd of November and appeared before the Bangkok South Municipal Court the day after where the court refused him bail as a flight risk.

Mr Chaiyanat or Du Hao has been charged with being involved in illegal drug distribution activities in Thailand.

On Friday, at the press conference given by the Minister of Justice, former massage parlour tycoon turned politician turned social activist Mr Chuwit again confirmed earlier reports that he would not keep the reward of 5% of the seized money that he was entitled to.

His intention was to give the money to hospitals.

However, Mr Chuwit has expressed some concern that charges of money laundering have not been brought against the drug kingpin by the task force and authorities.

In this respect, he points out that he had also supplied evidence to the Office of the Attorney-General on Friday substantiating why such charges should be brought against the alleged crime boss.

He also told reporters that he has further documents and evidence concerning this matter which he may reveal at a later stage if required.

He said he understood the wariness of the whistleblower.

Mr Chuwit’s concern is that the charges levelled against Mr Chaiyanat Kornchayanant and his associates may be too narrow to stick and thus opening him to legal consequences.

The 61-year-old Bangkokian had also expressed concern that the prosecution of Mr Chaiyanat, so far, was based on the raid on a nightclub in the early hours of October 26th in the Yannawa area of Bangkok and a large quantity of drugs found on the premises.

This includes concern that Yannawa Police Station is too small to handle the complex and expanding nature of this criminal investigation which now includes an international dimension, large amounts of money and an extensive criminal empire.

Police General Surachate Hakparn assured Mr Chuwit that the Royal Thai Police and himself were also concerned to make sure that this case is successfully prosecuted and all those involved brought to justice.

‘I, therefore, asked Mr Chuwit to be confident that the police will handle this case carefully and concisely. If in this case, he does not do well, the person who is damaged besides himself, is the police. People will no longer believe the national police agency because of this matter, please don’t worry.’

General Surachate said the process of seizing assets must be pursued first of all and after that, passed on to the Anti-Money Laundering Office (AMLO) which will have it reviewed by a key committee before criminal proceedings relating to money laundering are commenced.

General Surachate also points out that any funds transferred by Mr Chaiyanat Kornchayanant abroad will also mean that this will become an international investigation and will then have to involve the Office of the Attorney-General.

The top policeman revealed that between 60 and 70 police officers have now been assigned to the case but they are also tasked with working on other files and matters as well which also cannot be delayed.

He explained that, so far, he was satisfied with the movement on the case which has progressed within the expected time frame.