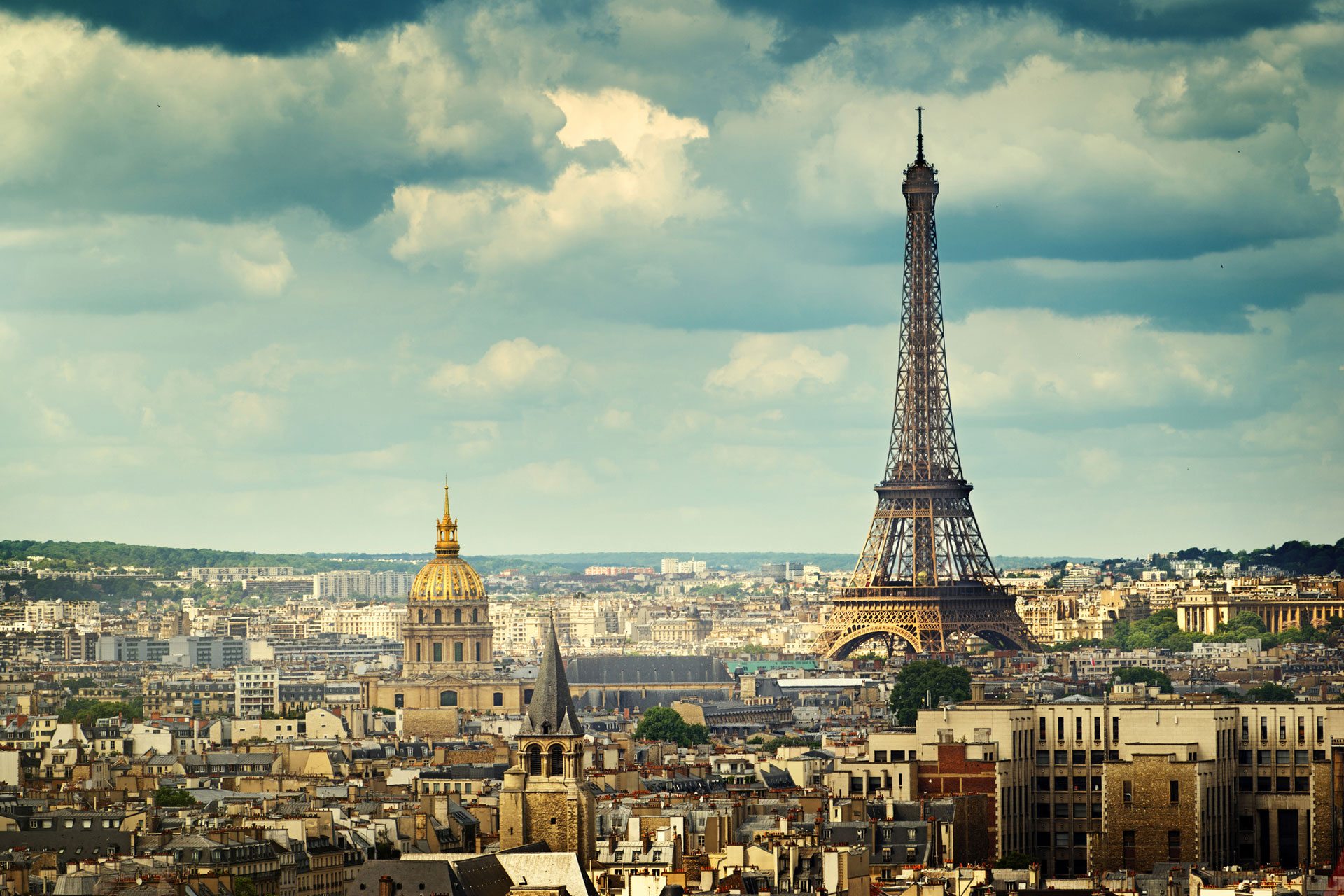 It regularly claims the crown for the most visited city in the world. We just can’t get enough of Paris. So, where can you find the best pastries in Paris? What’s the coolest new boutique hotel in the city? Where do Paris’ art crowd hang out? If you’re looking for Paris travel tips, you’ve come to the right place. We’ve found the hottest hotels, the must-visit exhibitions and the best restaurants to grab a bite in with our guide to Paris for 2022…

‘Paris is always a good idea.’ Or, at least, that was the form prior to the challenges brought to the city last decade. Tourism is only beginning to bounce back (after a painful lull) with a host of design-led hotel openings and renovations, a cosmopolitan gastronomic facelift and museums harnessing the capital’s fashion legacy with headline shows.

Never mind the modern likes of Maje, Sandro or Claudie Pierlot, the museums promise a trip to the ‘glory days’, when Paris was the glittering epicentre of the fashion world. It’s the stuff of sartorial reverie, a retrospective of codemakers, fierce talent and the noise of showbiz, politics and culture surrounding these fashion power houses.

Where to Stay in Paris

Classic romance in the heart of Paris: Le Meurice 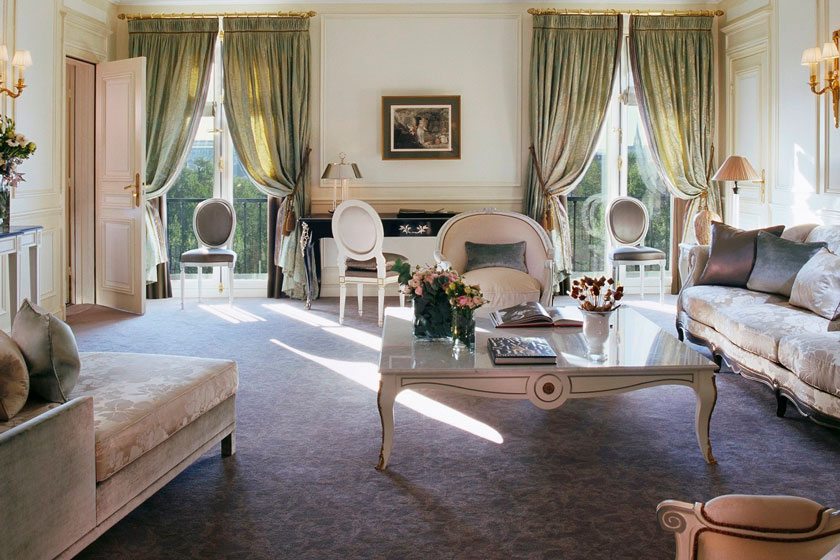 With a history stretching back to 1771 and a list of guests from across the years including Salvador Dali (who spent about a month of each year in the Royal Suite), Rudyard Kipling, Elizabeth Taylor and Liza Minnelli, Le Meurice is instantly recognisable in the heart of Paris. With views all across Paris (request a park view for sights over the Louvre and Eiffel Tower), it’s centrally located and perfectly positioned for exploring the city.

With distinctive luxe Arabesscato marble bathrooms (some with views over the Tuileries Garden), playful interiors details by Philippe Starck and two Michelin starred restaurant le Meurice Alain Ducasse on site, it would be understandable if you wanted to spend your entire 24 hours in Paris within the walls of this hotel. But try and leave at some point. If only for a stroll around the Tuileries Garden and to pop your head inside the world’s largest art gallery, right on your doorstep (for an hour or 10). We would visit this hotel again and again (and again). dorchestercollection.com

With 2017’s art deco revival in full swing, the first five-star hotel to pop up in the east of Paris is worth checking into. This former wood factory mixes gold mosaic tiling and attractive green metalwork. The swimming pool is pretty, too. sofitel.com

New luxury in the heart of Paris: Hotel de Berri 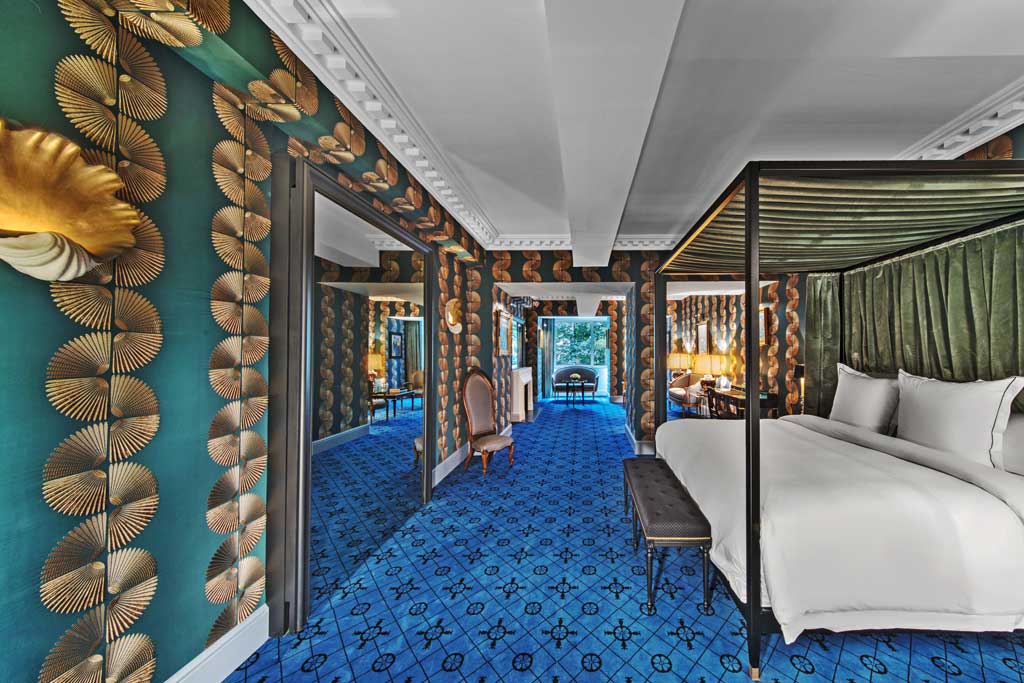 Just moments from the Champs-Elysees and the Triangle d’Or Fashion District, the newly-opened Hotel de Berri is the perfect choice for when you want bold Parisian luxury right in the heart of the action. Styled by designer and artistic director Philippe Renaud, each of the 75 guestrooms, including 35 suites, has a unique and bold design, from muted modern elegance to romantic 19th-century Parisian extravagance.

The façade has been maintained from the 1970s-era office building, while the more-is-more interiors are inspired by the luminaries who once resided at the Triangle d’Or address on the historic rue de Berri, from aristocrats and royals to prominent cultural visionaries.

The hotel also features an incredibly rare private garden spanning three-quarters of an acre for guests to enjoy. Onsite restaurant Le Schiap serves up excellent Italian cuisine masterminded by Tuscan chef Michele Dalla Valle (and formerly of Plaza-Athénée and Le Meurice). The walls of the restaurant are adorned with a colourful fresco painted by French artist-illustrator Hippolyte Romain. In a city overflowing with luxury hotels, the Hotel de Berri still manages to set itself apart from the crowd and create a case for trying something new… marriott.co.uk

Grand Hôtel du Palais Royal from the Small Luxury Hotels of the World collection. Right by the Louvre but hidden from the crowds in an idyllic courtyard, this fresh, design-led hotel lives up to the city’s culinary expectations. Their subterranean spa is ideal for post-shopping indulgence. Doubles from £325. slh.com

Contemporary romance descends on Paris’ 16th arrondissement with the opening of Brach Paris. With a signature nonchalance and mission to both redefine and cater to Paris’ new groove, Evok Group has stirred the sleepy 16th arrondissement (not least to mention the city) with their latest marvel, Brach – hot on the heels of Avenue de l’Opera’s Nolinski. brachparis.com

The perfect art base: The Peninsula 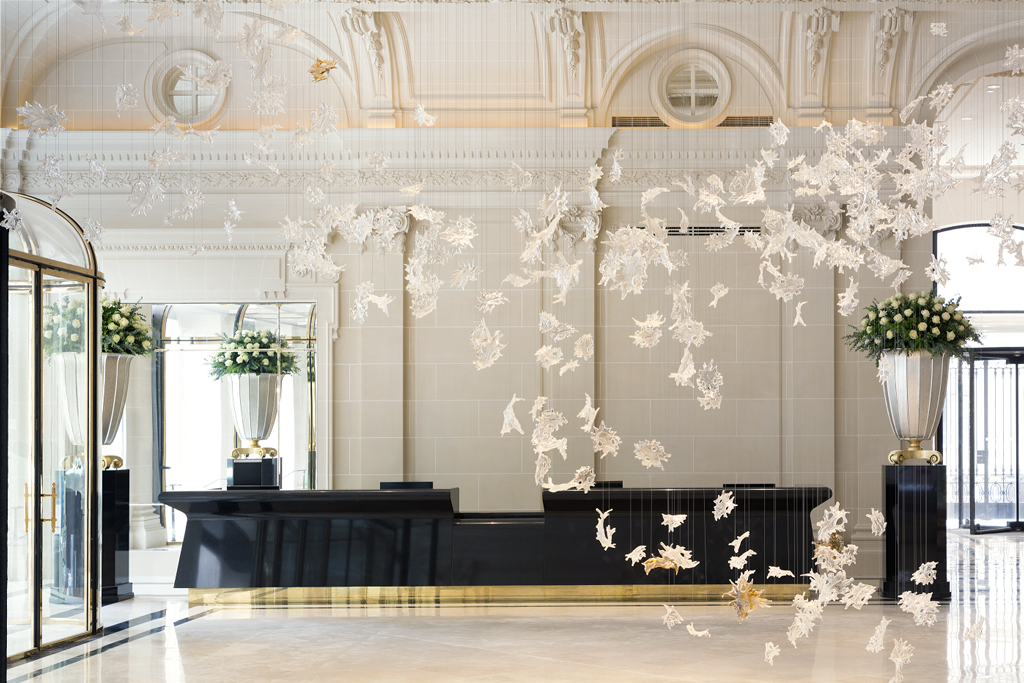 At new-gen palaces of Parisian deluxeishness such as The Peninsula – so cossettingly comfortable that it’s a shock to sit on an unheated loo seat after a stay here – there are puffy down duvets so light they almost float around you, perfect facials from Bérénice in the sumptuous little spa, and giddily romantic booths in the Chinese restaurant; rates remain wince-making but include bonuses such as a 9 am check-in and 7 pm checkout, room upgrades and free breakfasts. But the mega-treat is browsing the city’s marvellous permanent collections – at the Louvre, Musée d’Orsay, Musée Picasso, Musée Rodin and so on – without queuing or crowds. Review by Adriaane Pielou

BOOK: Doubles at The Peninsula, from £762. peninsula.com; Return fares on Eurostar, from £58. eurostar.com

Things To Do in Paris

Visit the Best Museums in Paris

Navigating the best museums and artworks in Paris is no mean feat, so don’t exhaust yourself by trying to cram too much into a short trip. You shouldn’t expect to see everything the Louvre has to offer in one day (or, realistically three), instead cherry pick the artworks you’re desperate to see and spend some time with those, or simply choose a wing at random and take the pressure off yourself to see anymore from your visit. There will always be next time. Don’t overlook the smaller, more unique galleries and collections in Paris. There is art at every corner in this cultural haven, so choose a district and dash in and out of pop-up shows and tiny exhibitions. Avoid lengthy queues by booking visits to the city’s most popular galleries and museums online in advance.

Sports fans should head west on arrival in the city and check out the 16th Arrondissement, home to the world-renowned Roland Garros tennis courts and the Parc des Princes and Jean Bouin stadiums. The keenest athletes will take up a membership at Club Molitor, a wellness facility equipped with state-of-the-art kit, plus Molitor’s Spa by Clarins, the largest spa in Paris complete with sauna, steam room, hammam, reading room and salon. The hotel is home to two beautiful Art Deco swimming pools, which have been an icon of Paris since 1929, the only place for swimming in the city, whatever the weather. mltr.fr

Where to Eat in Paris

This restaurant’s earthy, sustainable ethos is reflected in its original brick and stripped-back interiors. Locally sourced, seasonal plates of Spanish tapas are interrupted by the odd Japanese riff: roasted peppers, steak tartare and then pollock sashimi, all washed down with civilly priced organic wine from Basque reds to crispy Loire Valley whites. By Rosalyn Wikeley

French pastry chef Cédric Grolet of the Dorchester Collection’s Le Meurice was named ‘The World’s Best Pastry Chef’ at The World’s 50 Best Restaurant Ceremony 2018. Pay a visit to his pastry boutique at the exclusive hotel and check out one of the unique desserts, such as his signature trompe-l’œil sculpted fruits. Oui, s’il vous plaît. 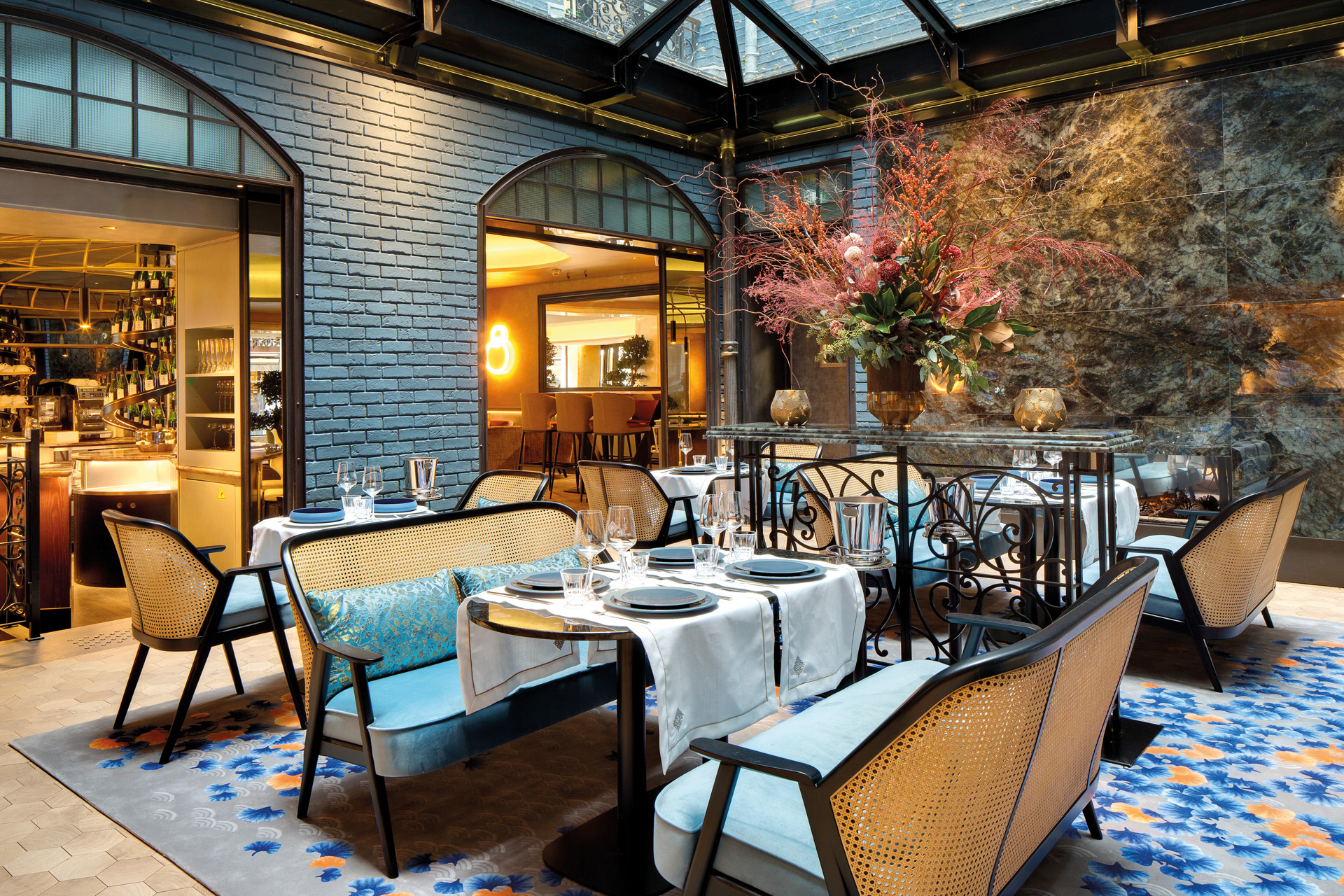 If you’re travelling by Eurostar (why wouldn’t you be?), arrive for your lunchtime train a little early and grab a bite at L’Étoile du Nord, a brasserie by two Michelin-starred chef Thierry Marx. Expect modern French buffet classics like chicken supreme, egg mayonnaise salad and even British bites like fish and chips with a tasty twist. Then, head into the Business Premier lounge for your pre-train drink.

Much like London, Paris is seeing a cabaret and music hall renaissance. Nowhere does high-octane, high-energy sequinned soirée quite like the French capital, and while Le Piaf has been around for years, its suddenly-in-vogue supper-scotch-and-song formula has made it one of the trickiest tables to pin down in the city. By Rosalyn Wikeley

Shang Palace is one of two restaurants that the Shangri-La Hotel, Paris has to offer. Michelin-starred, it sets the best of Asian and French worlds under one roof. And what is France without wine? Ask the sommelier who will suggest a noble and ancient liqueur or cases, vintages that bring a touch of sophistication to the mouth-watering banquet.

And we know you wouldn’t consider it, but forgetting to visit Pierre Herme for a macaron or two would just be rude, wouldn’t it?

The only way to travel to Paris is by Eurostar, with quick and easy city-centre to city-centre journeys starting at £29 each way and plenty of space for luggage. Upgrade to Business Premier to enjoy first class lounges at either end with on-board cuisine created in collaboration with Raymond Blanc OBE. eurostar.com