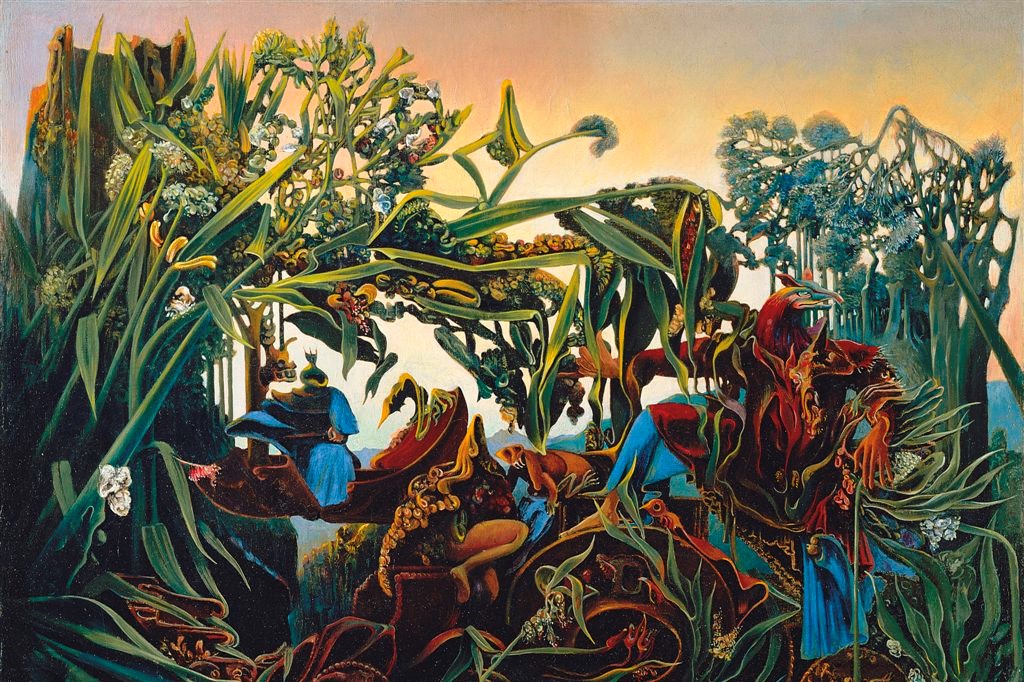 The exhibition, promoted and produced by the Municipality of Milan-Cultura and by Palazzo Reale with Electa, in collaboration with Madeinart, is curated by Martina Mazzotta and Jürgen Pech.

There are over 400 works including paintings, sculptures, drawings, collages, photographs, jewelery and illustrated books from museums, foundations and private collections, in Italy and abroad. Among these: the GAM in Turin, the Peggy Guggenheim Collection and the Ca’ Pesaro Museum in Venice, the Tate Gallery in London, the Center Pompidou in Paris, the Cantini Museum in Marseille, the State Museums and the Arp Foundation in Berlin, the Beyeler Foundation in Basel, the Thyssen-Bornemisza National Museum in Madrid.

The long study and investigation work carried out by the curators has made it possible to include among the loans, which boast the presence of about eighty paintings, also works and documents that have not been exhibited to the public for several decades. The immense vastness of themes and experiments in Ernst’s work is spread over seventy years of 20th century history, between Europe and the United States, constantly escaping any definition whatsoever.

Pictor doctus, profound connoisseur and visionary interpreter of the history of art, philosophy, science and alchemy, Max Ernst is presented in this context as a humanist in the neo-Renaissance sense.

If André Chastel claimed to find in Ernst a sort of “reincarnation of those Rhenish authors of devilry like Bosch”, Marcel Duchamp had traced in him “a complete inventory of the different eras of Surrealism”.

On the main floor of Palazzo Reale visitors will be able to immerse themselves in an enthralling itinerary that traces the adventurous creative parable of the artist, marked by the great historical events of the 20th century and studded with extraordinary loves, as well as illustrious friendships.

The itinerary narrates the biographical events of Ernst grouping them into 4 major periods, in turn divided into 9 thematic rooms that disclose interdisciplinary approaches to his art. An ample, ideal library, that of the artist, made up of illustrated books, study manuals, photographs, objects and documents, winds through the entire itinerary of the exhibition, inviting visitors to engage in games of cross-references and correspondences between sources of inspiration and the works themselves.

The exhibition recounts the years spent by Ernst in Paris and France, the emergence of Surrealism, his second marriage to Marie-Berte and then his love with Leonora Carrington, the deep friendships, exchanges and collaborations with many protagonists of the avant-garde , travel and experimentation, the advent of the Second War, his imprisonment as a “degenerate artist” wanted by the Nazis. The exile in the United States, organized thanks to the support of his son Jimmy and above all of Peggy Guggenheim, whom the artist will marry for a short time, introduces the part of the biography America, 1941-1952.

The entry into the international scene of New York, the great love and then the marriage with Dorothea Tanning, the transfer to Sedona, Arizona, in the house built and decorated by the artists, introduce the following rooms. Here emerges in particular the role that nature and the landscape play in the invention of techniques (frottage, grattage, decalcomania and dripping), in the creation of strands of the fantastic and the marvelous that also invest sculpture and goldsmithing, reflecting a constant dialectical tension between word and image, between spirit and matter.

In the years leading up to man’s landing on the moon, art and science dialogue in Ernst’s works, opening up unprecedented views of the cosmos and involving astronomy as well as anthropology, physics and pataphysics. Works, books and cinema introduce the artist’s extraordinary secret writings, to those encryptions that go beyond codified languages ​​and are aimed at those who are capable of revealing the mysteries of the cosmos.

As in a large Wunderkammer, and in analogy with the universe of Max Ernst, the exhibition and the volume that accompanies it challenge visitors to try their hand at fascinating and intriguing games of perception between astonishment and wonder, where logic and formal harmony go hand in hand to impenetrable enigmas, where works, techniques and constellations of symbols lead beyond painting.

The exhibition is accompanied by a catalog published by Electa, a guide and a new edition, also by Electa, of two fundamental works by Paola Dècina Lombardi on the Surrealist movement: Surrealism 1919-1969. Rebellion and Imagination and Woman, Freedom, Love. An anthology on surrealism.