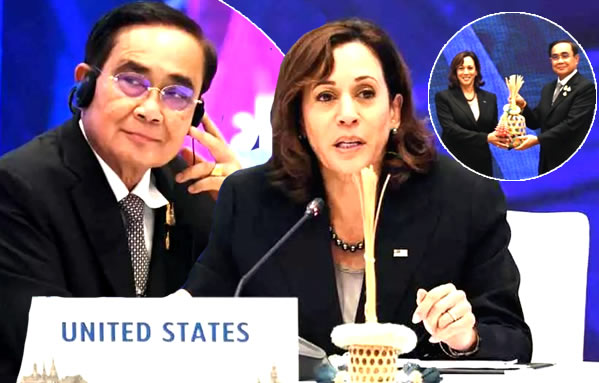 Successful summit was wrapped up by Thai Prime Minister Prayut Chan ocha in Bangkok on Saturday as he handed over the baton to the US delegation led by US Vice President Kamala Harris. The summit produced another constructive exchange between China and the United States following the meeting in Bali, earlier in the week, between President Xi Jinping and US President Joe Biden. It also saw Thailand forge a consensus on the need to foster more stability and open up free trade in the Asia Pacific while advancing sustainability as a critical economic imperative.

A US source at the APEC summit this weekend suggested that Thailand is looking at purchasing new, small and safer modular nuclear reactors from the United States to power its homes, industries and cities in the future as part of its plan towards creating a more sustainable economy and stated goal of net zero carbon emissions by 2065.

A highly successful and productive Asia-Pacific Economic Cooperation (APEC) Summit was wound up on Saturday by Thai Prime Minister Prayut Chan ocha and United States Vice President Kamala Harris as the US now takes over leadership of APEC from Thailand.

The two-day summit saw tentative rapprochement between the United States and China with the kingdom seen to be working closely with both superpowers.

A key outcome of the summit was the adoption of the ‘Bangkok goals’ towards a new focus on sustainability in economic development.

Prayut presents US Vice President Harris with a Thai chalom, the motif of the APEC 2022 summit as a symbol of strength, flexibility and consistency

Prime Minister Prayut Chan ocha on Saturday drew the Asia-Pacific Economic Cooperation (APEC) Summit to a close when he made a presentation to US Vice President Kamala Harris of a traditional Thai chalom, a sort of traditional basket which has been the basis for the 2022 logo for the event hosted by Thailand standing for strength, flexibility and consistency.

The summit, following the G20 meeting in Bali earlier in the week where President Joe Biden met with Chinese President Xi Jinping, has been a success in at least beginning to mend fraying US-Chinese relations and placing a bottom on what had been a descending spiral towards a geopolitical conflict between the United States and China linked with economic competition, human rights, the Ukraine war and especially over differences relating to Taiwan.

Vice President Kamala Harris, representing the US president who returned to the US midweek to celebrate his granddaughter’s nuptials, met President Xi in Bangkok on Saturday, a meeting in which she stressed the need to maintain open lines of communication between the United States and China.

Vice President Harris acknowledged that both countries now found themselves in competition due to a shift in policies and emphasis over the last five years.

In response, President Xi Jinping through China’s Xinhua News Agency, struck a cautiously optimistic note with both sides emphasising mutual agreement on the need for stability and to develop increased free trade in the Asia Pacific within the World Trade Organisation (WTO) framework.

‘I hope both sides will step up mutual understanding, reduce misunderstanding and misjudgement, and together push for Sino-US relations to return to a healthy and stable track,’ President Xi Jinping said in the aftermath of his meeting with Vice President Harris.

There was also an agreement to work towards a common front on economic challenges such as inflation as well as climate change, food security and sustainability.

During the two-day event, on Friday, Vice President Harris had to convene an emergency conclave of western leaders and US allies including Japan after North Korea fired a powerful intercontinental ballistic missile from its territory which landed in Japanese waters and which experts have claimed demonstrates rising capability by the regime in Pyongyang which might not be far off developing a missile which could reach the West Coast of the United States.

General Prayut, on Saturday, told reporters that a key concern of the two-day meeting of world leaders in Bangkok was the rising threat to the world from the possible use of atomic weapons given the increased threat from North Korea and veiled threats from Russia that it may resort to tactical nuclear strikes as the tide of war in Ukraine has turned against it.

‘Everyone was concerned about it,’ General Pryut told reporters.

At the conclusion of the summit, the Asia-Pacific Economic Cooperation (APEC) leaders adopted the ‘Bangkok goals’ aimed at sustainability and the promotion of a Bio-Circular-Green (BCG) economic model.

‘We hope the BCG economic model will also be one of the main factors that bring economies together,’ declared General Prayut.

The declaration also found a formula of words to smooth over differences in the interpretation and outlook on the war in Ukraine as Indonesia had done earlier in the week in Bali although this event was more focused on economics.

On Friday night, the US Secretary of State confirmed that he had held talks with Thai Deputy Prime Minister and Foreign Minister Don Pramudwinai and praised Thailand as the host of the summit and its year at the helm of Asia-Pacific Economic Cooperation (APEC).

This role will now pass to the United States with Vice President Harris promising, on Saturday, after receiving her gift from General Prayut, that over the next 12 months the United States will continue to show that it is a force for stability in the Asia Pacific and seeks to strengthen economic cooperation as the basis for prosperity.

She revealed that next year’s summit would take place on the weekend of November 12th and that the venue will be San Francisco where Ms Harris previously worked as the District Attorney for the city before later becoming a senator for California in the US upper house.

The venue is seen by many analysts as an opportunity for the United States to showcase its leadership of the world’s fast-growing digital economy as it competes in the Asia Pacific with China which continues to emphasise its proximity and closer relationship to its neighbours, a message repeated on Saturday when President Xi Jinping met again with Prime Minister Prayut Chan ocha and top ministers at Government House.

This was before the conclusion of the summit at the Queen Sirikit Convention Centre with Prime Minister Prayut Chan ocha and Vice President Kamala Harris on stage together.

‘Our host year will demonstrate the enduring economic commitment of the United States to the Indo-Pacific,’ Vice President Harris told her audience as he took up the baton for APEC 2023.

‘We are working to strengthen our economic relationships throughout the region, including by increasing two-way trade flows and the free flow of capital, which supports millions of American jobs.’

A key outcome of this weekend’s meetings at the Asia-Pacific Economic Cooperation (APEC) was an announcement by Ms Harris that the United States would be making available to Thailand small modular nuclear reactors as a way for the kingdom to meet its 2065 net zero sustainability targets.

Nuclear power is a thorny issue among the Thai public with the kingdom establishing a research reactor in 1962 with the Thailand Institute of Nuclear Technology being established in 2006.

This organisation has been studying nuclear power technology including nuclear fusion, plasma and other capabilities in conjunction with the Ministry of Higher Education, Science, Research and Innovation while also drawing on research and technological know-how from China’s Institute of Plasma Physics of the Chinese Academy of Sciences (ASIPP).

Despite this, there is strong resistance among the Thai public to the concept of nuclear power particularly after the 2011 incident in Fukushima, Japan and current nervousness over such plants in Ukraine which was home to the world’s greatest nuclear disaster in 1986 in Chernobyl.

This has led to entrenched public opposition even to the development of a 20-megawatt test reactor to replace the 1962 model to be located near the headquarters of the Institute of Nuclear Technology in Nakhon Nayok in the centre of Thailand, northeast of Bangkok.

The new, advanced and pre-built modular nuclear reactors in the United States can vary in size from 15 megawatts up to 300 megawatts.

They are reported to be easier to install leaving a smaller footprint and are far safer without the need for human intervention if something goes wrong to shut them down.

However, some controversy already attaches to them with research conducted by Stanford and the University of British Columbia, in the last two years, challenging the manufacturer’s claims that these smaller reactors produce less radioactive waste than their larger and more conventional peers with the academic studies suggesting the smaller units produce between two and thirty times the level of radioactive waste that would need to be disposed of.

On Saturday, a US official travelling with Vice President Kamala Harris, who refused to be named, underlined the safety of the new smaller nuclear reactor plants and their capacity as a safe clean energy source.

‘We really look forward to working with Thailand to take advantage of the benefits of small modular reactors and reliable clean energy sources,’ the official was quoted in the Bangkok Post newspaper as saying.

The official stated that the United States would work with Thailand to install and maintain this new, safer and supposedly cleaner technology which will result in the ‘highest standards of safety, security and nonproliferation’ when up and running.

President Xi Jinping touches down in Bangkok for APEC Summit hosted by Thailand, PM at the airport