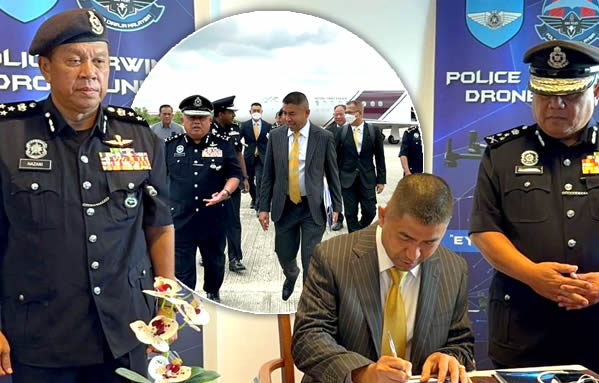 Arrest of the three Thai nationals in Malaysia and their deportation to Thailand sends a strong signal to any cross-border traffickers thinking of targeting young Thai women and girls. When alerted by a young Thai girl’s family in the summer, the initial priority for a special unit within the anti-trafficking unit was her rescue then the police, with the cooperation of their Malaysian counterparts, had all involved hunted down.

Deputy National Police Commissioner General Surachate Hakparn or Big Joke flew into Kuala Lumpur on Monday to arrest and bring home three Thai suspects living in Malaysia for prosecution in Thailand in a joint operation between the Royal Thai Police and the Royal Malaysia Police that closed down the operation of a human trafficking gang preying on young Thai girls and women.

On Monday, a high level delegation of the Royal Thai Police flew to Kuala Lumpur in Malaysia at the conclusion of an anti-trafficking operation against a gang that lured Thai women and young girls into prostitution in the neighbouring country through advertisements on social media offering legitimate work and attractive pay of between ฿20,000 to ฿200,000 per month.

The team of Thai police and officials flew into Malaysia’s capital Kuala Lumpur on board a Royal Thai Air Force jet.

Thai girl, not yet 15, rescued from a nightmare world of forced prostitution in Kuala Lumpur by a special police unit in Thailand working with local police

The visit to Malaysia followed the rescue of a Thai girl, not yet 15 years of age, at the end of July this year after her distraught family appealed to police in Thailand and a special unit, liaising with the police on the ground in Malaysia, assisted the young girl at the centre of the case to return home.

She had been forced into prostitution by the human trafficking gang not long after she arrived in Kuala Lumpur and was introduced to her employers at a hotel.

These turned out to be the owner of a massage parlour in the city and a woman who worked at procuring paying clients.

The teenager was subsequently forced to work long hours selling sex and was threatened that if she stopped, even due to illness, she would be sold on to another gang that would impose an even harsher regime upon her with violent tactics.

The young girl was rescued and returned to her family on July 28th last.

General Surachate told the media that the operation had seen other Thai women and Indonesian victims also released from the clutches of the gang, five of whom have been arrested so far in the course of the ongoing Thai Malaysian police action.

Two were arrested on foot of warrants issued in Thailand.

These were 41 yrs old Mr Wanpadet Ruangrit and 32-year-old Ko Tae or Leo, a Myanmar national.

Both men were involved initially in transporting the Thai girl from her home in Thailand to the border with Malaysia and then onwards to Kuala Lumpur.

These three suspects, taken into custody by Thai Police on the trip, are Thai nationals involved in running a prostitution ring in the neighbouring country and who were tracked down by Malaysian police.

They went on the run when they got word of the high-level joint police force probe into their activities.

They face conspiracy charges linked with the operation of the prostitution ring which involved housing the trafficked girls and women while producing paying clients.

General Surachate said the initial priority for Thai police was the rescue of the young underage girl when the matter was reported to the police by her parents but that subsequently, the police, working with their Malaysian counterparts, had been able to progress the investigation.

Four victims were rescued from the clutches of the gang including two Thai nationals and two Indonesians.