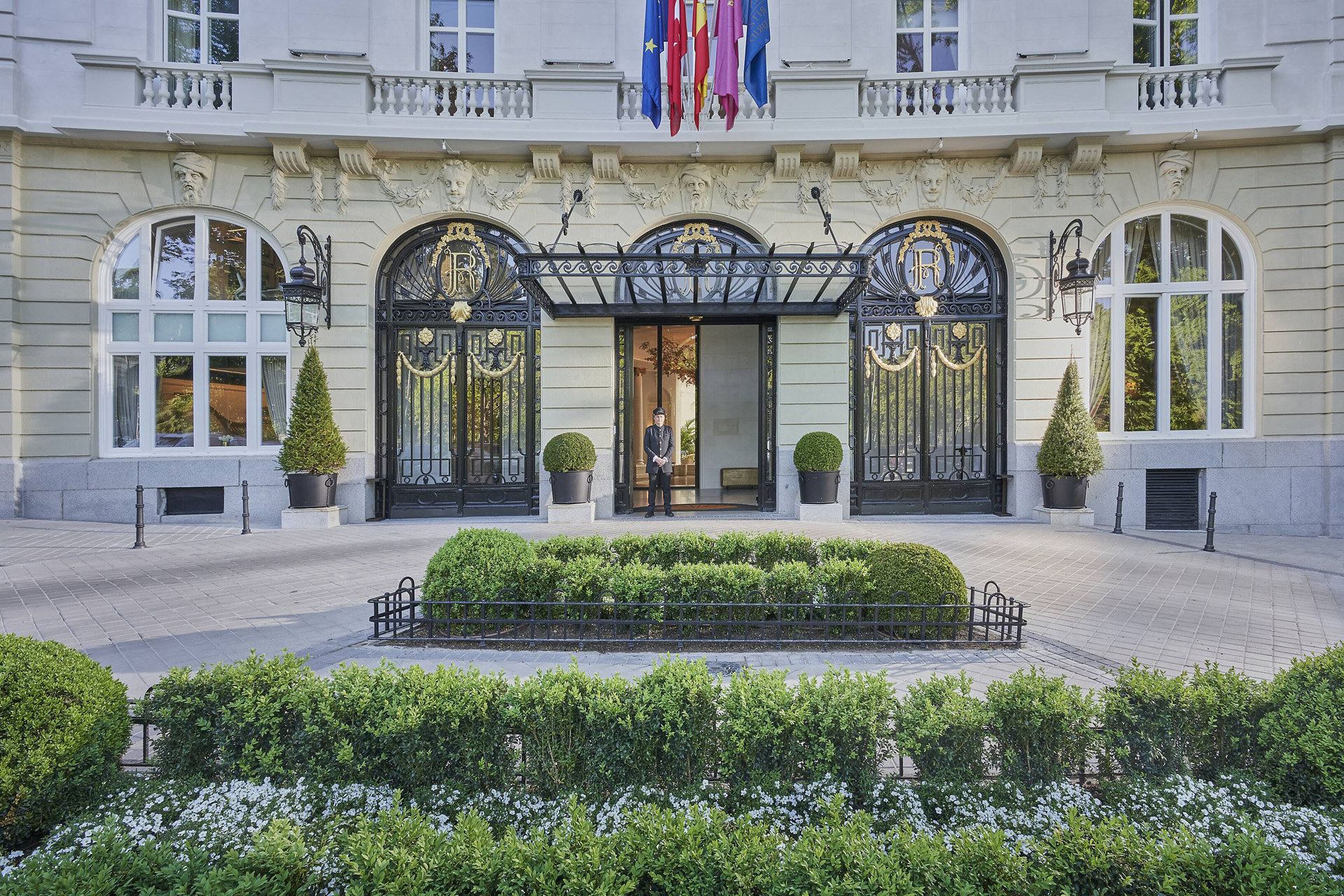 Having opened in 1910, the Ritz in Madrid, Spain is one of the city’s most iconic buildings, and the best address in town, traditionally the hotel of choice for visiting heads of state. But, for all its history and Belle Epoque style, even its biggest fans had to admit that, then managed by Belmond, it was beginning to look rather tired by its centenary. Not any longer, writes Anwer Bati, who checked into the new Mandarin Oriental Ritz. 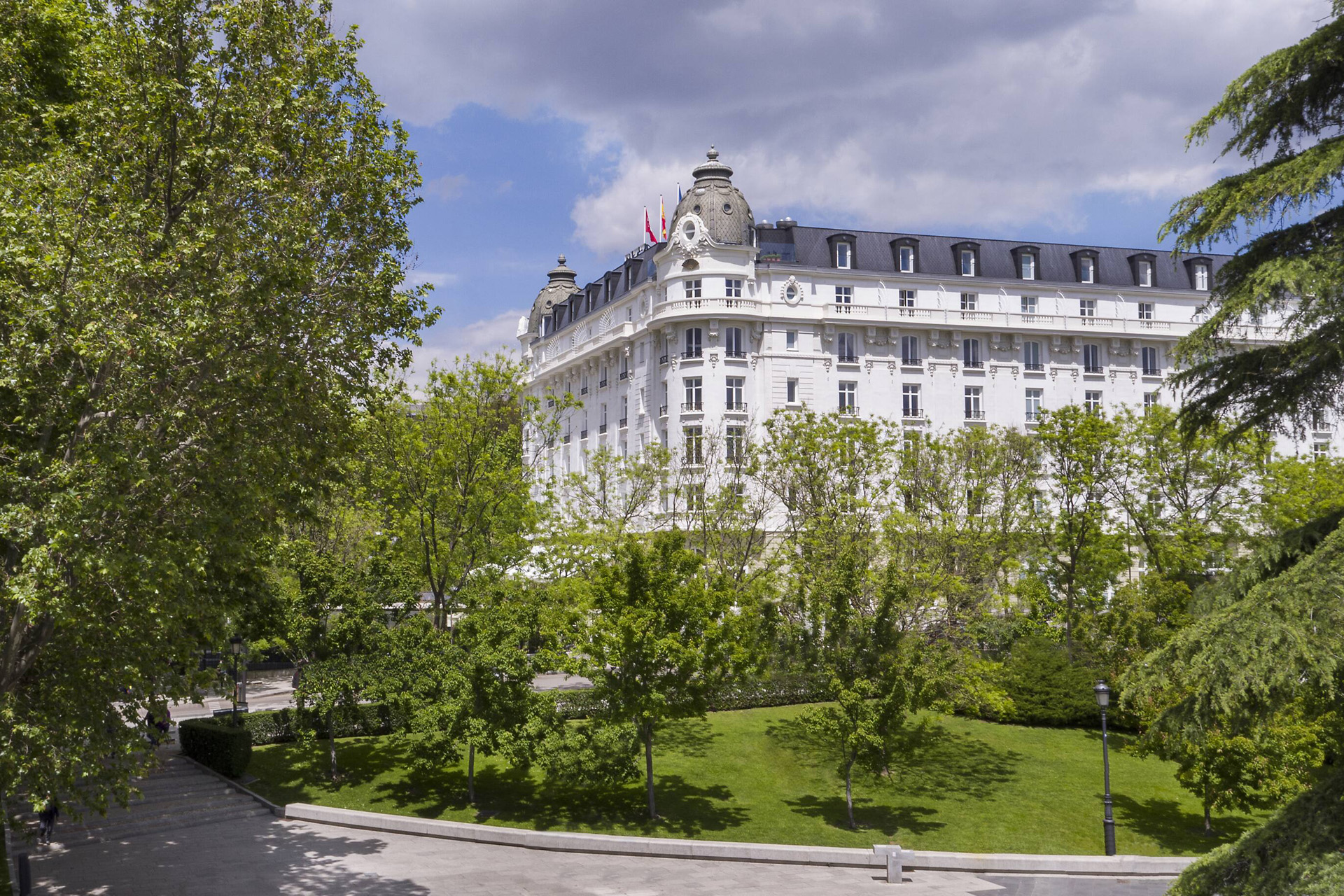 After closing down for a major £100 million, three year makeover – overseen by Parisian designers Gilles and Boissier and leading Spanish architect Rafael de La-Hoz – the place, which reopened in April 2021 under the management of Mandarin Oriental, has been transformed.

The changes in the hotel, a listed building, are at once immediately noticeable, and at the same time feel in keeping with its heritage. It is much brighter than in the past – literally in the case of the famous Palm Court, where the crystal roof, long obscured, now filters sky light down to the stylish space once again. And the lobby, around the concierge desk (which has been moved), is also lighter, with gold and silver leaves jauntily suspended from the ceiling. 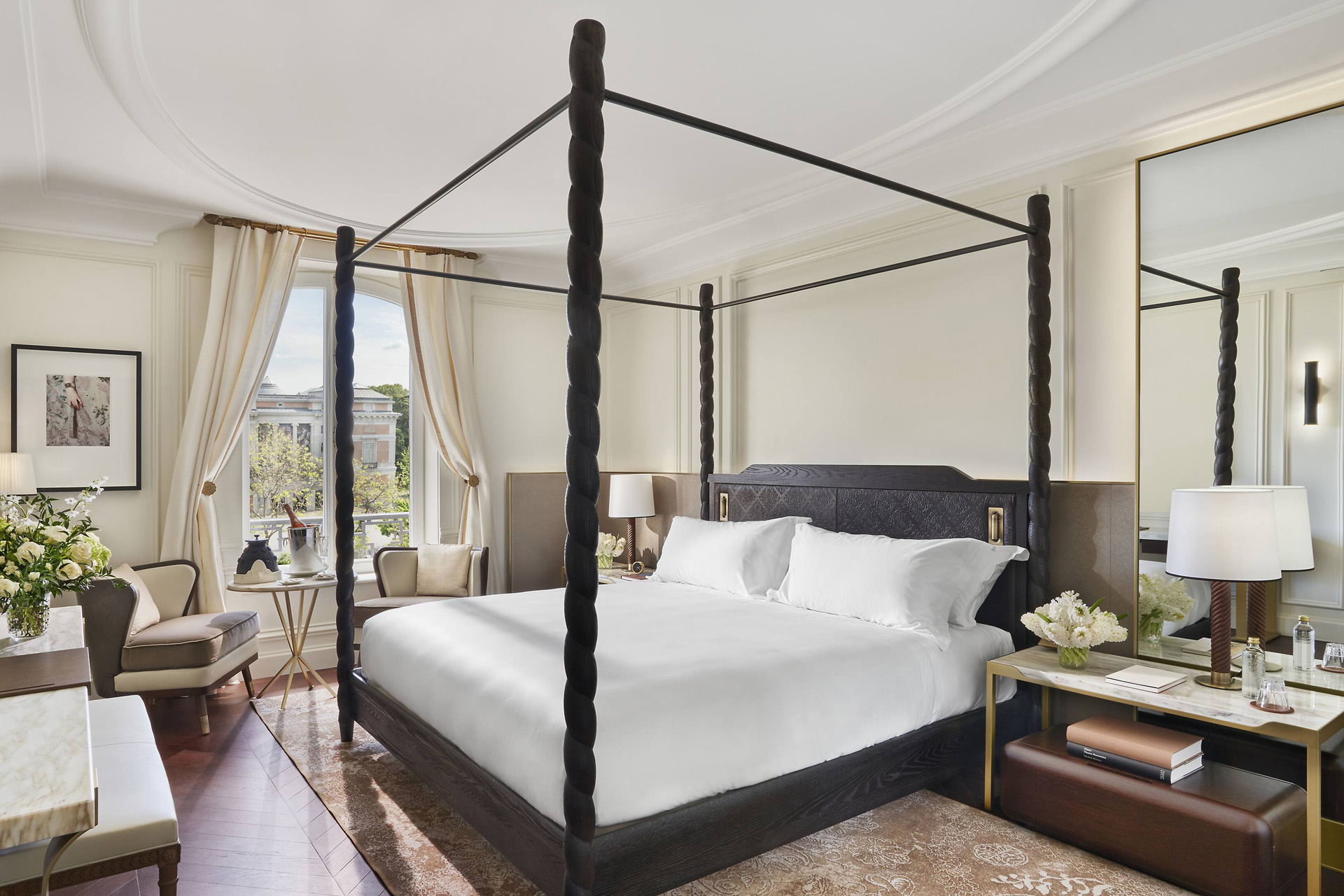 The number of rooms has been reduced from 164 to 153, with more suites than before (53 to be precise). The rooms themselves, much less fussy than they used to be, are also decorated in bright tones, and maintain a classic luxury feel, while looking contemporary. Floors in the suites are of pale wood while, for some reason, they are darker in the rooms.

The room lighting is mercifully easy to use, and there are several USB charging points. Everything is of the highest quality: beds have leather headboards and the sheets are linen. All the rooms have double wash basins in the well-lit marble bathrooms, but only the suites guarantee you a bath tub. The Natura Bissé toiletries come in tubes.

The hotel’s distinctive domes, formerly only used as store rooms are now suites with balconies – and great views. Rooms overlooking the inner courtyard, once to be avoided, are now as pleasant to stay in as the others. 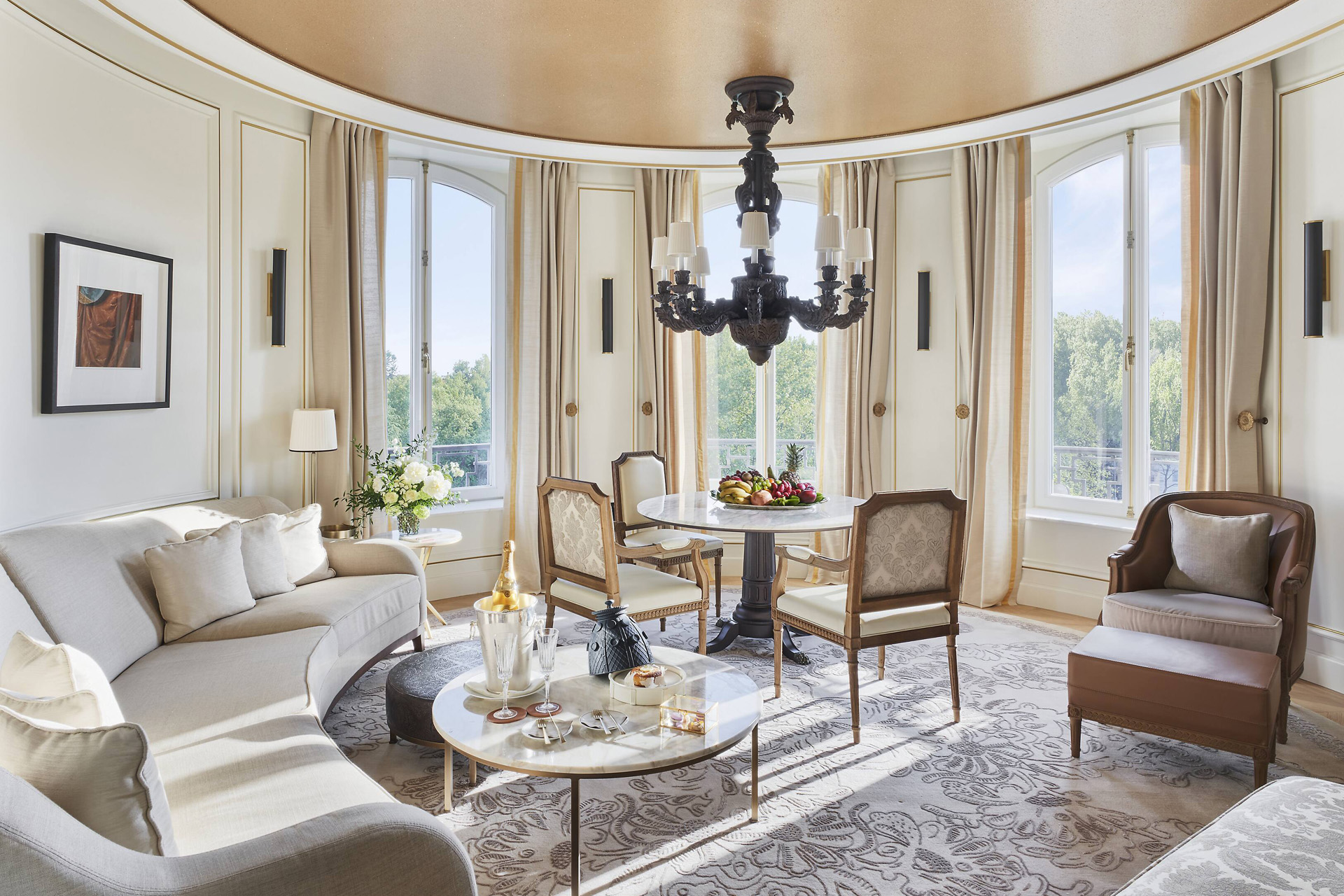 One thing unchanged in the hotel is the superb service, with many of the 360 friendly and helpful staff staying on under the new management, with new, cheerful staff members also recruited, all now dressed in smart Jorge Vazquez outfits. The suites come with efficient butlers and the housekeeping throughout is exemplary.

A major new feature is the lovely 14 metre pool, fitted in under the garden. In keeping with a palace hotel like the Ritz, it’s surrounded by marble, with Preciosa chandeliers dangling above. Next door is a well-equipped gym, and there’s also a new, small spa. It only has one treatment room, but you can also experience a range of therapies and services (including hairdressing, waxing and manicure) in your room. 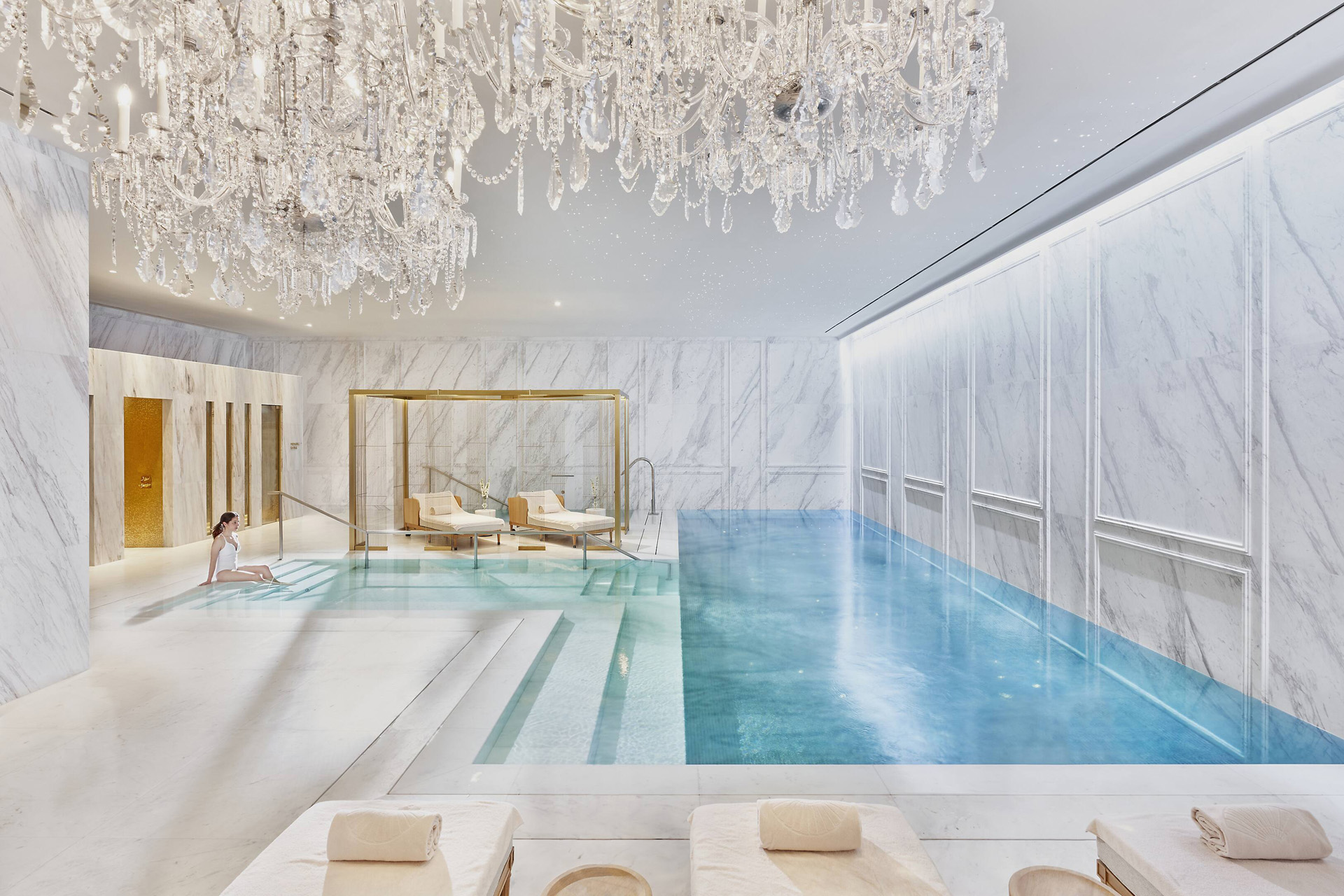 All the catering in the Mandarin Oriental Ritz – from room service to fine dining – is under the direction of celebrated Spanish chef Quique Dacosta, famous for his 3 Michelin star restaurant near Alicante (he also owns much trumpeted Arros QD in London). This is not to say there isn’t plenty of variety – there is.

Starting with breakfast: now a buffet (new as of this summer), the choice is extensive, including an Asian Breakfast option, the Royal Breakfast (including caviar and champagne), and a la carte choices. 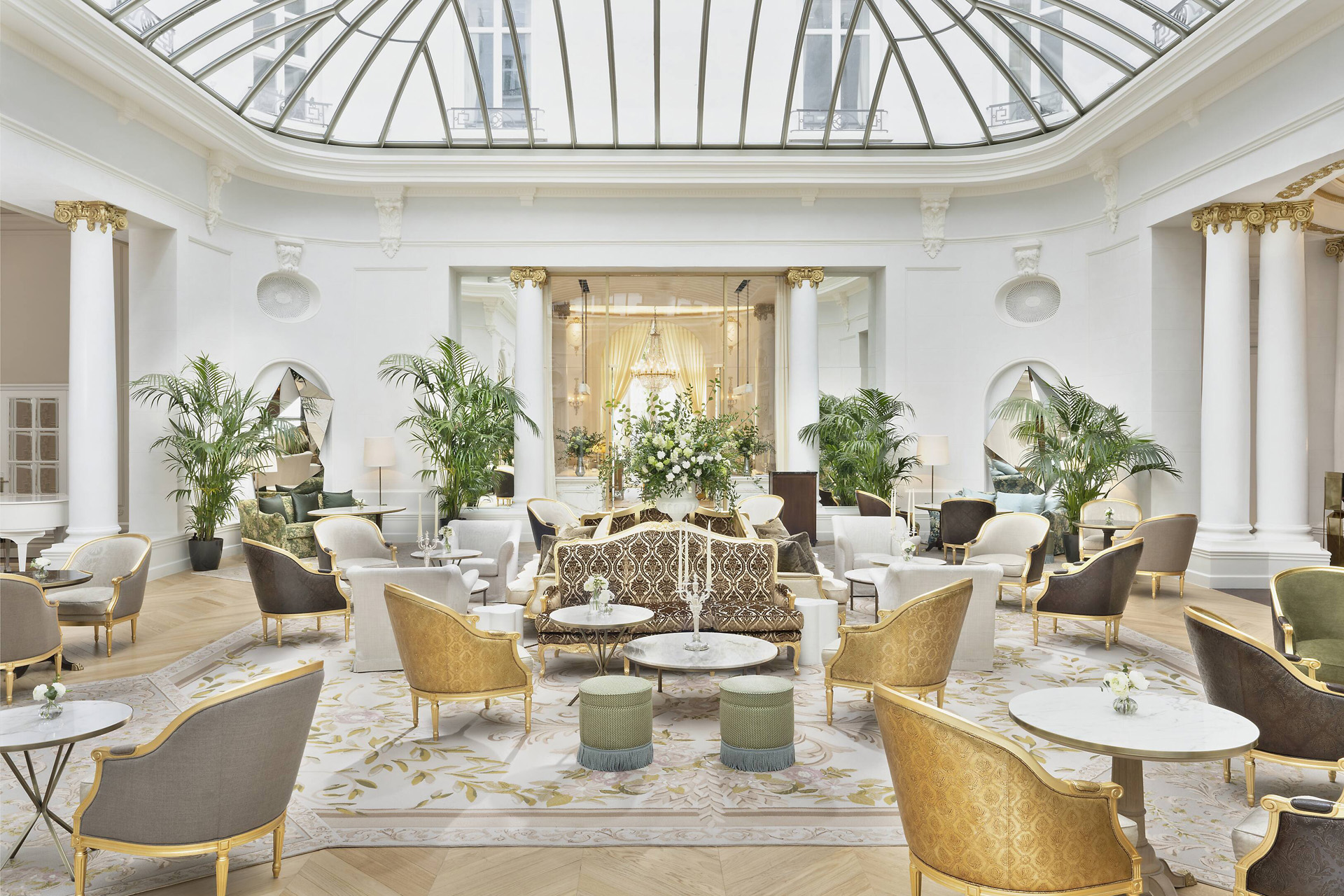 Dacosta’s main restaurant, the gastronomic Deessa, which has already earned a Michelin star, is in the magnificent Alfonso Xlll room, with several tasting menus available, served at marble tables with sofa seating and subdued lighting. Dinner is quite an experience (lunch is also served four days a week) and is an unhurried affair.

The unstuffy service is in the hands of enthusiastic staff, and the playful, beautifully presented modern dishes are simple but luxurious – light, but packed with flavour, highlighting Spanish ingredients, some of them unusual. Allow yourself to be guided on a memorable journey. On Sundays, Dacosta serves a splendid lunch buffet.

The Palm Court is the place for more traditional dishes, both Spanish and international, with plenty of a la carte choice, and reasonable value set lunch and dinner menus. The Palm Court also hosts the hotel’s famous afternoon tea. 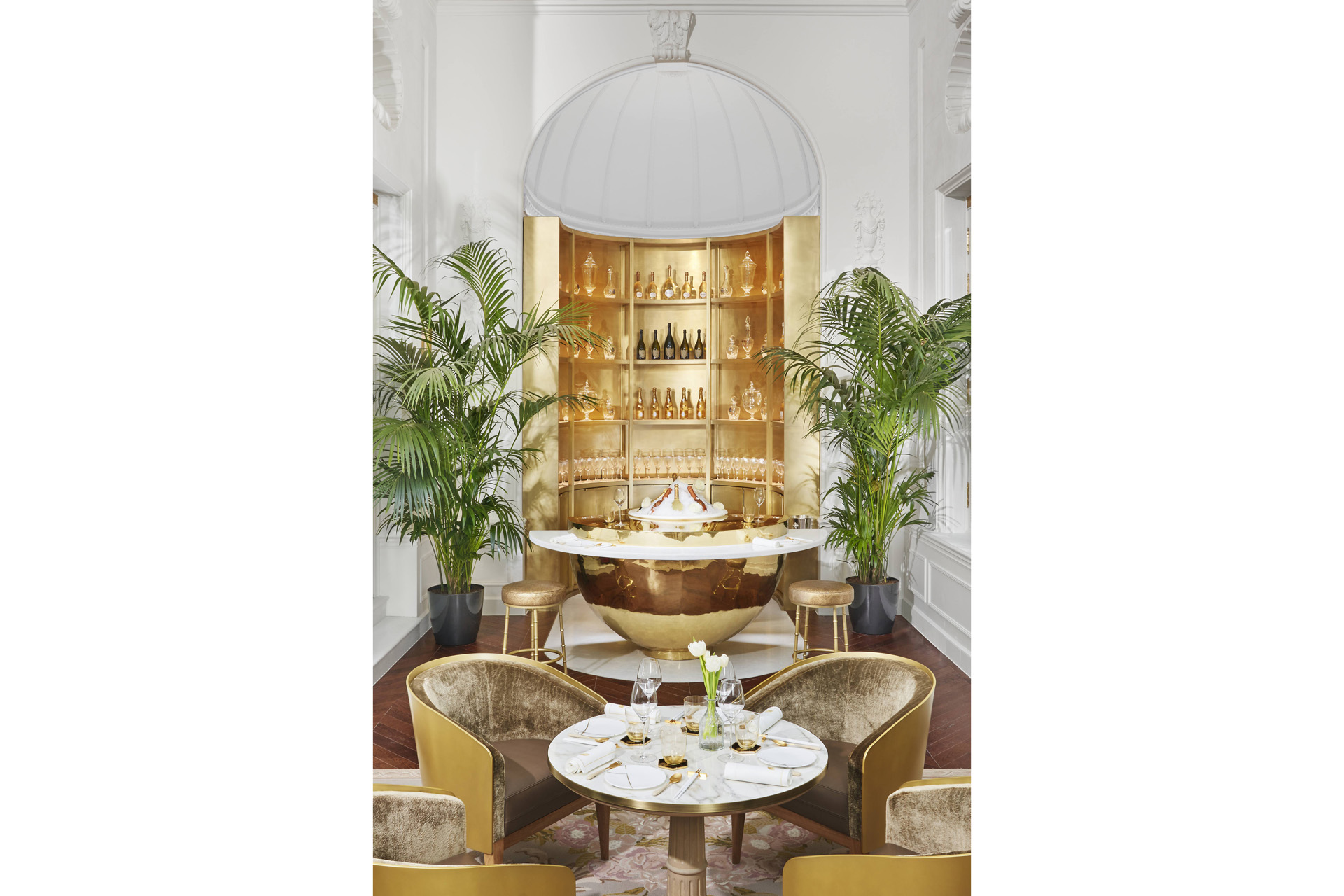 The Ritz garden has long been one of Madrid’s most popular meeting places – for lunch, dinner or drinks – serving sophisticated tapas, grills, rice dishes and salads.

What was once a restaurant has become the Mandarin Oriental Ritz’s main bar, Pictura (so called because of the portraits adorning the walls). It is open in the evening, and just what you would expect from a grand hotel: spacious, stylish and comfortable. And, for special occasions, tucked into a corner of the Palm Court is the hotel’s champagne bar – with only eight seats – serving an exceptional selection of fizz and luxurious tapas. It’s open for lunch and dinner, too.

The Mandarin Oriental Ritz is right in the middle of Madrid’s Golden Triangle of art: the Prado, Thyssen and Reina Sofia museums. It is actually next to the Prado, one of the world’s greatest old master galleries, and only five minutes away from the extraordinary and eclectic Thyssen collection. The Reina Sofia is the place for modern art, with Picasso’s Guernica the highlight.

The Ritz is also well placed for visits to the Plaza Mayor, the royal palace and the artisan shops and tapas restaurants of the Barrio de las Letras area. It’s also very near the splendid Retiro park. If you’re unfamiliar with Madrid, city tour buses go from just outside the hotel.

The Mandarin Oriental Ritz has been splendidly smartened up, while losing little of its classic appeal. It can take its place once again as one of the world’s finest hotels, with all the facilities you would expect. And, for art lovers in particular, it couldn’t be better located.