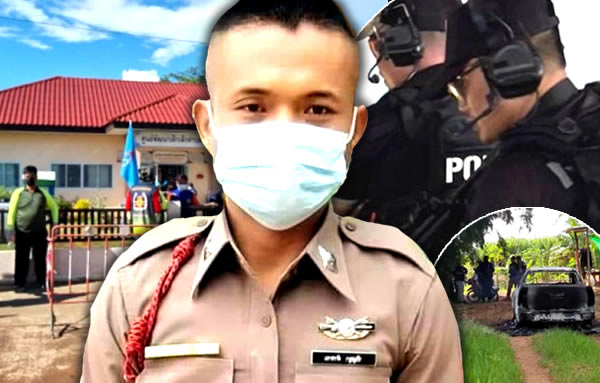 Background to this case raises serious questions which are bound to grow louder as horrendous details of the carnage emerge including the plight of two to four year olds murdered as they slept and the gratuitous murder of a pregnant school teacher among the dozens killed by the mad man who attacked some children with a meat cleaver. It appears that 34-year-old Police Corporal Panya Khamrab had, for some time, exhibited severe anti-social behaviour and a drug addiction problem before he was eventually confronted in the middle of last year and subsequently arrested in an internal police investigation in January 2022 for possession of drugs.

Thaialnd faces coming to terms with the evil and barbarity seen in the Na Klang District of Nong Bua Lamphu on Thursday when 34-year-old former policeman Police Corporal Panya Khamrab slaughtered young children including dozens as they lay sleeping at the child care centre near his home before driving home in a rage to murder himself and his family. The atrocity raises searching questions about the country’s policy in controlling illegal drug use as well as the screening of police officers and discipline within the force given the disturbing background to the case which has emerged, painting a picture of a policeman who was able to terrorise the community at will while using a local police station as a scene for parties.

There were harrowing accounts of the man arriving in a white Toyota Vigo pickup at a children’s care centre in the Na Klang District of Nong Bua Lamphu on Thursday afternoon and emerging from it with a SIG Sauer P365 pistol and a meat cleaver.

After murdering four teachers and carers on the spot, one distraught teacher afterwards recalled the moments that followed as she pleaded with him for the lives of the young children inside when the policeman’s gun momentarily jammed.

He later used his legs to break down the door and began shooting at will and using the meat cleaver to inflict horrific injuries on some children while teachers barricaded a door inside and tried to rescue other children through a window to safety saving at least a dozen lives.

Scene for a macabre nightmare movie

Over in one dormitory of the building, a tragedy awaited as children between two and four years of age were found sleeping and the murderous man killed them mercilessly changing what had been a quiet, peaceful scene into something like the set of a macabre nightmare movie, a traumatic outrage for all who witnessed it.

The former policeman identified by the Central Investigation Bureau (CIB) as Police Corporal Panya Khamrab who was removed from the ranks of the Royal Thai Police in June this year backdated to January and who was due to appear in court on Friday in relation to drug charges particularly for possession of crystal methamphetamine after he was arrested by Nong Bua Lamphu Provincial Police last January following an internal probe into his manic and violent behaviour towards a member of the public as well as other police officers.

Police released arrest photograph of the killer due in court on criminal drug charges this Friday, this was a revenge attack by an angry and evil man

Police on Thursday quickly released a photograph of the killer taken following his arrest in January this year when the 34-year-old man was confronted by police investigators looking into his violent and outlandish behaviour as a police officer on duty at Na Wang Police Station where fellow officers were reported as living in fear of him.

The timing of the attack, the day before the killer was due to face criminal drug charges in court is significant. This was a revenge attack perpetrated by an angry man, a man driven by drugs to be consumed by evil.

As police tracked the killer’s trail of destruction on Thursday to his home where they found his pickup burned out and the policeman dead on his bed from a gunshot wound to his head, they also disclosed that he had taken the life of his wife and three year old son.

Some members of the public in Na Klang District in the province told of encountering the already notorious and feared ex-policeman as he travelled through the streets after committing unspeakable evil at the child care centre minutes earlier and fleeing his vehicle which continued to ram other vehicles as the killer’s rage continued on his way home to die.

Officers at Na Wang Police Station told of problems beginning with Police Corporal Panya after he moved to the station when he had problems with his then-girlfriend.

Testimony and private notes from the killer suggest that he was addicted to crystal methamphetamine which caused him to lose weight and be easily triggered into violently dangerous temper tantrums.

The ferocity and unpredictability of the former officer’s rage made fellow serving officers at the police station reluctant to confront him or intervene.

One story being reported is that the officer, who reportedly was ordered by superiors to provide security for a local Government Savings Bank, had insisted on sleeping in a car outside the branch and when asked by the local bank manager to assist with the transport of cash for ATMs, had drawn his firearm and threatened the financial official, an incident which was reported to the policeman’s senior officers.

More troubling are reports that the junior police officer made use of Na Wang Police Station as a venue for parties when he began dating the former girlfriend of a local drug dealer serving time in Nong Bua Lamphu Provincial Prison.

He had met the woman at a karaoke bar, often a front for prostitution in Thailand.

Brought friends and girlfriends to the local Na Wang Police Station for alcohol and drug parties, shot off gunfire rounds and shot a local person’s dog

Reports suggest that the woman regularly invited her friends to parties at the police station where alcohol and drugs were consumed.

The affair caused consternation and dismay among fellow officers at Na Wang Police Station and local residents for some time, a situation aggravated by the policeman’s penchant for using his firearm to shoot off rounds and on one occasion, shooting the dog of a resident who dared to confront him.

The situation is reported to have come to a head in July 2021 when a police officer at the station confronted him about his disruptive and unacceptable behaviour at the police facility.

‘Been addicted to drugs since high school I’ve been sucking methamphetamine for a long time,’ a note of admission by the policeman which emerged following his arrest in January this year.

This was as legal proceedings for possession of drugs were commenced against him and before a disciplinary committee in June confirmed his expulsion from the force and the civil service which was backdated to his arrest on January 20th.

This appalling outrage drew international messages of support and sympathy for Thailand and the government as the death toll continued to rise on Thursday but it has also brought political reaction.

It comes just weeks after a small businessman in Phuket gunned down three 18-year-old school students after a minor traffic accident when the man admitted to taking crystal methamphetamine.

He later went beserk in police custody following his arrest for the murders.

Murders in Phuket by businessman high on crystal methamphetamine shocked locals in September, call to get tough on drugs submitted to the government

This event, among other drug-related incidents in Phuket, galvanised public opinion in that province against drugs of all kinds with the Democrat Party, in particular, calling for a tougher policy from the government against drugs and MPs in Phuket openly criticising the cannabis legalisation campaign and policy of the Bhumjaithai Party, a key partner in General Prayut Chan ocha’s ruling coalition government.

However, the atrocity also brings back vivid memories of February 8th 2020 when a disgruntled army officer, Sergeant Major Jakrapanth Thomma, killed 29 people and injured 58 others at the Terminal 21 Shopping Centre in Korat in Nakhon Ratchasima and elsewhere when he appeared to suffer a similar breakdown and launched himself into a murderous rampage with multiple firearms, some taken from army munition depots.

This was referred to by the Move Forward Party candidate for the recent governorship of Bangkok, on Thursday, Mr Wiroj Lakkhanaadisorn, on social media.

‘Failure to effectively address mental issues in police and military ranks has put all Thai citizens at risk from individuals entrusted with firearms,’ the politician wrote.

It is clear even in the immediate hours after this painful and harrowing tragedy that many people in Thailand are traumatised and will be looking for answers.

The new National Police Commissioner General Damrongsak Kittiprapat has already spoken of the pernicious influence of crystal methamphetamine as a drug and the need to screen and root out officers in the force who may be prone to manic, hallucinatory or unacceptably aggressive behaviour.

At the same time, Minister of Justice Somsak Thepsutin spoke of the compensation available to families of those killed or injured in the outrage under the Crime Victims Compensation Act.

However as news filters through of the murder of children aged two to four as they lay peacefully sleeping and the murder of a teacher who was pregnant, this atrocity will not so easily be forgotten and must lead to urgent action against illegal drug use particularly in respect of crystal methamphetamine throughout Thailand which is at epidemic proportions causing misery wherever it is found and on Thursday, in the quiet province of Nong Bua Lamphu, the slaughter of innocents.