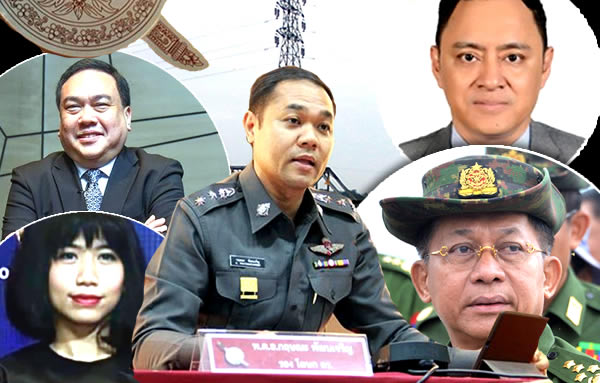 The arrest of Dr Tun Min Latt who is at the heart of a vast conglomerate with extensive links to Myanmar’s ruling junta on suspicion of drug trafficking and money laundering shines a spotlight on the murky links between Myanmar’s rulers and the criminality on Thailand’s borders linked with the Golden Triangle drug producing zone. At the heart of the story is a conglomerate supplying services to Myanmar’s junta which has long been adept at evading international sanctions and the law outside its borders.

A Thai police operation into suspected drug trafficking and money laundering operations linked to a Myanmar-based conglomerate involved in arms dealing, electricity supply and provisioning food to Myanmar’s armed forces, looks set to rock relations between the two countries. The probe has already led to a current Thai senator whose son-in-law is reported to be among four people arrested on Saturday last the 17th of September in an anti-drugs and money laundering police swoop, strenuously denying any links with wrongdoing or illicit business activities after police on Wednesday confirmed the arrest of Dr Tun Min Latt of the Star Sapphire Group closely linked with the daughter of Myanmar’s dictator and leader of the junta in Nay Pyi Taw, General Min Aung Hlaing.

A sitting Thai senator on Thursday came out to deny close links with a Myanmar tycoon arrested by an anti-drugs unit of the Royal Thai Police on Saturday 17th September in an early dawn raid.

Senator Upakit Pachariyangkun told reporters that he knew 53-year-old, Dr Tun Min Latt, through his involvement in trading electricity supplies between Thailand and Shan State in Myanmar but denied any links to more sinister aspects of the Burmese man’s extended business operations which the Royal Thai Police believes may extend to drug trafficking and money laundering at the highest level through a vast conglomerate engaged in hotels, electricity trading, casinos, mining and arms sales.

38-year-old son-in-law of sitting Thai senator, Upakit Pachariyangkun among four reported having been arrested last Saturday in a coordinated swoop

It is also being reported that one of three other people arrested in last Saturday’s police swoop in Bangkok which was accompanied by coordinated searches throughout the city, is a 38-year-old man who sources claim to be a son-in-law of the Thai senator who was also taken into custody.

Police also detained two women, a 50-year-old and a 44-year-old in the raids, both of whom are reported to be Thai nationals.

Before last week’s arrests, which were confirmed by Royal Thai Police spokesman Police Colonel Kritsana Pattanacharoen on Wednesday, Dr Tun Min Latt headed up a conglomerate called the Star Sapphire Group which operated partnerships in conjunction with Myanmar’s military and the junta which assumed power in February 2021 in a coup which has led to an all-out civil war in the country with the regime in Nay Pyi Taw only in full control of 17% of the state.

Sources in Thailand this week were letting it be known that the arrest of the business tycoon could be seen as part of a crackdown by Thai authorities on what are thought to be enormous and disturbing money laundering operations being carried out between Golden Triangle drug gangs and semi-legitimate business enterprises linked with the Burmese junta which are centred on Shan State and other zones of illicit activity across the border from the kingdom.

It follows a review of anti-drugs laws and money laundering provisions in recent years after forces were given the green light to target those at the top.

It should be noted that Burma or Myanmar throughout previous decades has become adept at such schemes which are often run in association with illegal operations and the international drugs trade which is rife on its borders and to which authorities in China also turn a blind eye to.

It is understood that the conglomerate has links to the daughter of junta strongman and effective military dictator of Myanmar General Min Aung Hlaing.

General Min Aung Hlaing is currently the subject of calls from the International Criminal Court (ICC) in The Hague for his arrest based on ‘widespread and systematic use of torture’ as part of the junta’s violent crackdown and war against democratic forces in the country led by the recognised National Unity Government (NUG).

Dr Tun Min Latt is the son of a former Director-general of Myanmar’s Ministry of Hotels and Tourism U Khin Maung Latt who served under the former regime of General Than Shwe who held power in Myanmar from 1992 until 2011 when he was succeeded by General Thein Sein who ushered in reforms which eventually led Myanmar to its experiment with democracy that was extinguished overnight by the February 2021 coup sparking unprecedented and virulent public opposition in the country.

Sources within Myanmar have suggested that the investigation being conducted by the Royal Thai Police is centred on fears that Dr Tun Min Latt may have been using his conglomerate’s electricity distribution activities which purchased power from Thailand’s Provincial Electricity Authority to be used in Shan State and to provide power in Tachileik through his firm Myanmar Allure Group, as a conduit for illegal drug proceeds.

At the same time, the conglomerate is also suspected of channelling illicit funds through the casino trade in Tachileik which has been linked to Chinese investors and drug kingpins who play a key role in the illicit Golden Triangle drug trade.

The Myanmar Allure Group was established in 1999 through an agreement to operate casinos in Tachileik brokered by Dr Tun Min Latt’s father Mr U Khin Maung, the Myanmar tourism chief for an extended period.

As well as being involved in power generation and electricity supplies in addition to an extensive range of other industries, the Sapphire Group has been active together with Thai-based shareholders and proxies, in the development of the border city of Tachileik in Shan State which over the last decade has become well known as a centre for prostitution and gambling with links to the international drugs trade.

The scale of the drugs trade centred on the Golden Triangle area surrounding Thailand across the border in Myanmar and Laos can be adduced by a comment this week from Minister of Justice Somsak Thepsutin after he revealed that security forces in the kingdom had seized ฿10 billion in drugs in a coordinated campaign using renewed, simplified and broader laws against the kingpins in a campaign initiated by Prime Minister Prayut Chan ocha.

He estimated that output from the region was ฿2 trillion per annum or $54 billion a year, approximately 10% of Thailand’s annual GDP.

Advertisements seeking pretty Thai women promised a monthly income of up to ฿250,000 per month working in the border town’s freelance sex trade

Tachileik was the centre of attention two years ago in Thailand when it was found that thousands of Thai women had moved there to work in the prostitution industry after the country’s pandemic lockdown leading it to become the source of an outbreak in the kingdom when the women returned across the border often illegally.

On Thursday, Senator Upakit admitted that he was the owner of a hotel in Tachileik but pointed out that he had sold it in 2015 before he became a Thai senator in 2019 after being appointed by the former Thai junta.

‘I clarified with the anti-graft agency before assuming the post of a senator. I have never concealed any information,’ he told the media.

The Star Sapphire Group was first targeted by UK authorities in August this year when the activities of Dr Tun Min Latt were highlighted.

Dr Tun Min Latt’s firm, through another division, is involved in procuring drone technology from Israeli sources for the benefit of the Myanmar armed forces as well as holding contracts to provision the now beleaguered and hated Myanmar army, the Tatmadaw, with food supplies.

Royal Thai Police confirmed the arrests on Wednesday, said they wanted to extend the detention of the suspects and that $5.37 million had been seized

As part of the extensive police operation by the Royal Thai Police, last Saturday, over ฿200 million was seized ($5.37 million) as part of the investigation which is believed to be linked to criminal activities.

On Wednesday, Police Colonel Kritsana Pattanacharoen confirmed that police were investigating the four people arrested including Dr Tun Min Latt on suspicion of being involved in drug trafficking and money laundering offences.

He confirmed that police were requesting that the Criminal Court extend the detention period of the four suspects, two men and two women.

Following the arrests on Saturday last by an anti-drug unit of the Royal Thai Police, there were reported to be intense queries submitted to the Immigration Bureau in Thailand concerning the status of Dr Tun Min Latt before the anti-drug police operation and details of the investigation were confirmed.

The conglomerate is controlled by Mr Tun Min Latt’s family but also partnered with junta owned Myanmar Economic Holdings Limited (MEHL) and Hong Kong-based firm VPower to develop a $297 million gas-powered 350-megawatt electricity generating plant in Yangon which halted operations in July this year as its viability was questioned under current conditions in the war-torn country as well as hostile external market conditions.

Thai Senator Upakit linked to the operation of a division of the conglomerate, Myanmar Allure Group

It is also reported that Senator Upakit Pachariyangkun has had links, at least in the past, to the Myanmar Allure Group, another part of the conglomerate.

One of those arrested last Saturday is reported to be Mr Dean Young Gultula, the 38-year-old husband of Adisara Gultula or Adisara Pachariyangkun, the daughter of the senator, who was a former director of the concern up until 2019 when it does appear that Senator Upakit resigned from the firm before taking up his position in the Thai Upper house.

Senator Upakit also took the opportunity to defend the Myanmar businessman on Thursday and voiced his doubts that he was, in any way, involved in the illegal drugs trade but instead described him as being involved in selling arms to the military in Myanmar.

‘He conducts honest business,’ Senator Upakit insisted. ‘My family and I don’t have flawed records.’

The senator explained that he had formed this opinion in the course of his dealings with the tycoon concerning electricity sales.

At the same time, sources within Myanmar were this week, also insisting that the Myanmar Allure Group was very much dependent on using Thai shareholders and proxies for its ongoing operations in the kingdom as part of a conglomerate that is ultimately controlled by Dr Tun Min Latt and linked closely with the junta in Nay Pyi Taw.

It is reported that Senator Upakit sold his casino resort in Tachileik for more than $8 million to another Thai businessman Mr Chakris Kajkumjorndej who has also been, in the past, closely linked with the senator in other business concerns such as CyberPlanet Interactive Public Company, a business which was actively involved in energy power supply, software games and property development in 2015.

The company later morphed into the Stock Exchange of Thailand (SET) listed firm United Power of Asia which owns the Andaman Power and Utility Company Limited.

A second war raging in Myanmar unlike anything seen since World War Two with over 12,000 dead