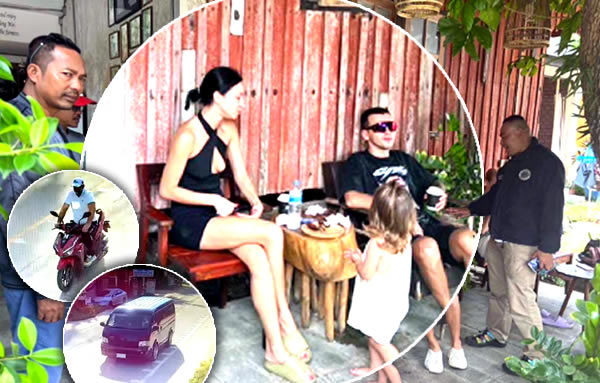 Mysterious exploits of a six-member gang including Russians, Kazakh nationals and a German have been tracked by police since Monday when the disturbing case was reported to Ko Samui Police Station. The gang is believed to have spent some time in Pattaya in Chonburi province before travelling to Ko Samui where they stayed in a hotel before and after confronting the Russian couple at a local café on the popular holiday island.

Police on Ko Samui are investigating the activities of a gang linked with the Russian mafia who extorted $50,000 from a young Russian couple on the island on Thursday, September 15th last while pursuing them after a menacing demand that $3 million be paid over to in cryptocurrency funds. It is not quite clear what the basis for the ultimatum was or if any members of the gang are still in Thailand with at least two having left the country between September 17th and 20th last.

A Russian couple was threatened and had money extorted from their cryptocurrency accounts on September 15th last on Ko Samui before reporting the case to the local police on Monday after a six-member gang began following them and intimidating them seeking to have further funds transferred to them using Bybit, a Singapore based cryptocurrency exchange.

Police officers on Ko Samui and Police Region 8 have opened an intensive investigation into the case although officers have not yet fully understood the context in which the demands by the group were made from the young couple.

The two have been named as 31-year-old Evgenii Abdullin and his 31-year-old wife Ekaterina Abdullin who police revealed are regular visitors to the kingdom over the last 5 years. The duo operate a real estate business on the island and arrived last in Thailand earlier this year.

On Thursday, the 15th of September they were visiting a favourite coffee shop, Boy’s Organic Coffee shop in the Taling-ngam area of Ko Samui when six men arrived in a black van and two motorbikes.

The men demanded that the couple pay them $3 million in cryptocurrency or the equivalent of ฿112.5 million baht but Mr Evgenii suggested that he did not have that amount of funds to hand.

Mr Abdullin told Ko Samui police that he agreed to pay over the money as he felt intimidated by the men and feared for his safety as well as that of his wife and family.

He told police this week that they had threatened to physically assault and beat him and his wife on the spot in the tense exchange at the coffee shop.

The day after the intimidating encounter with the men Mr Abdullin noticed that both he and his wife were being followed by the gang.

Two days after that, on Sunday, September 18th, the couple received a Telegram message from the group via a mysterious telephone number that they had handed him at the meeting three days before, asking him if he had the remainder of the money required.

He was told to transfer the funds on the Bybit cryptocurrency exchange.

Incident and threatening behaviour reported to police on Ko Samui this Monday, just days after millions of dollars were demanded in an online message

The couple then decided to report the intimidation to police on Ko Samui and the case was filed this Monday the 26th of September with Police Lieutenant Colonel Udomsak Thappa, the Head of Investigation in Ko Samui, who took the details and launched a full investigation into matter.

Since then, the case has been assigned to Police Lieutenant Colonel Kittisak Daengchai, the Deputy Chief of Investigation for Region 8 of the Royal Thai Police based in Surat Thani.

Police have revealed that the black van which has been picked by CCTV footage on the island but without enough clarity for a registration number has left Ko Samui.

It is believed to have originated in Chonburi province.

Police are reported to have positively identified four of the men who took part in the extortion operation. Two are from Kazakhstan, the central Asian country and former Soviet republic while another is a Russian national and a third is from Germany.

Police believe the gang are linked with the Russian mafia and have confirmed that two of those who took part in the intimidation of Mr Abdullin and his wife, left Thailand shortly afterwards.

The German man exited the kingdom on September 17th while one of the men from Kazakhstan left on September 20th.

Police have yet to ascertain if there was an underlying basis for the demands made on the Russian couple or why they were targeted by the gangsters.

It is understood that, on Tuesday, the Russian man was further interviewed by Police Lieutenant Colonel Udomsak at Ko Samui Police Station to examine all details of the matter.

Police have established that two motorbikes used by the gang were rented locally while the black van is believed to have originated in Chonburi with the gang staying in Pattaya before moving to a hotel on Ko Samui before confronting the Russian and his wife.

Russian couple arrested, charged and fined for having sex in public on a Pattaya beach shown on video clip