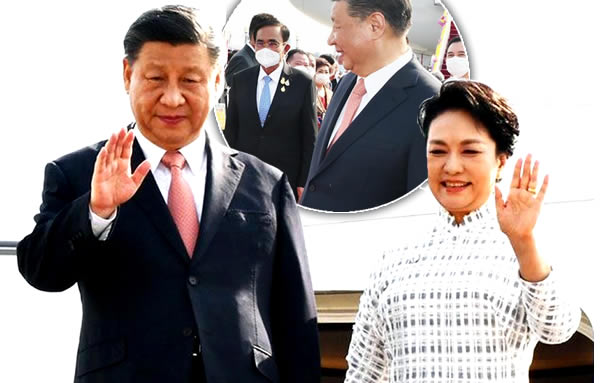 National Police Commissioner General Damrongsak Kittiprapat has implored the public in Bangkok to assist the police in carrying out the mammoth security operation for the summit and to report any suspicious activities via hotline numbers. On Thursday, there were already standoffs and scuffles in the street between protesters and riot police.

Chinese President Xi Jinping arrived in Bangkok ahead of Friday’s Asia-Pacific Economic Cooperation (APEC) Summit in the centre of the Thai capital. He was welcomed by Thai Prime Minister Prayut Chan ocha. It comes as police have informed the public that a security cordon is now in place around the venue of the summit in downtown Bangkok which will see traffic restrictions, post and parcel delivery checks, closed roads and random checkpoints operated by the police over the next 72 hours or so.

President Xi Jinping of China flew into Suvarnabhumi Airport Bangkok at 2.20 pm on Thursday and was greeted on arrival by Prime Minister Prayut Chan ocha and other officials.

The 69-year-old Chinese leader was accompanied by his wife, 60-year-old Ms Peng Liyuan, a famous Chinese soprano, contemporary folk singer and university professor whom the Communist Party leader married in 1987 when he was the deputy mayor of the eastern port city of Xiamen in Fujian province.

Just 25 minutes earlier, the Prime Minister was also on the tarmac to welcome Mr John Lee, the new Chinese appointed Chief Executive of Hong Kong which is also sending a delegation to the Asia-Pacific Economic Cooperation (APEC) Summit which begins in Bangkok on Friday.

Earlier, the Hong Kong leader expressed his pleasure at meeting the Thai Prime Minister in person, praised Thailand for hosting the summit and heralded the strong economic cooperation between the Chinese-controlled territory and the Kingdom of Thailand.

Hong Kong, a city territory with an economy bigger than Thailand’s, has recently applied for fast-track membership of the Chinese-led Regional Comprehensive Economic Partnership (RCEP), the world’s biggest free trade market of which Thailand along with other ASEAN countries, China, Japan, South Korea, Australia and New Zealand are members.

It is also in direct discussions with Thailand and the 10-nation ASEAN community in relation to a free trade pact with the city’s special relationship to the Guangdong–Hong Kong–Macao Greater Bay Area or megalopolis, a highly developed and industrialised area of over 64 million people being a key attraction to potential trading partners.

Meanwhile, the two-day international geopolitical event in Bangkok, seen by the government as a showcase for Thailand, its return to democracy since 2019 and its economic development plans, is also being targeted by protest groups who have descended on the capital in a similar way that such events are targeted across the world when countries are thrown into the spotlight.

President Xi Jinping and his wife attended the G20 Summit in Bali this week where Indonesian security services used armoured vehicles and banned protests near the event although vocal anti-G20 demonstrations were staged in Jakarta, the capital, which saw two Chinese nationals arrested for breaking their visa conditions.

Bad news from Beijing with Xi’s rise, the prospect of war and a divided world have greatly grown

The police chief warned the public that no one is allowed to breach a strict security cordon within 50 metres of the Asia-Pacific Economic Cooperation (APEC) summit venue which is now the subject of ultra-tight security involving no less than 30 different state agencies and security services.

Police are already facing a range of protest groups on the city’s streets with scuffles and paint being thrown on Thursday as a standoff was seen between some groups and police enforcing strict security measures.

General Damrongsak urged the public to check their travel routes in Bangkok over the coming days as key arteries are now closed to traffic, particularly near Ratchadapisek Road and Asoke.

There are also restrictions imposed on traffic on the Chao Phraya River with officers at Lumpini and Thong Lor Police Stations tasked with coordinating with up to 48,000 residents in the city who may be impacted.

The security protocols and precautions being put in place will involve checks on parcels and deliveries as well as checkpoints throughout the city. Some of these operations have already begun.

The police chief thanked the public in advance for their cooperation and asked them to use the 191 or 1599 hotline numbers if they happen to notice any suspicious or abnormal activities over the next 72 hours in an effort to make the international event a success for Thailand.