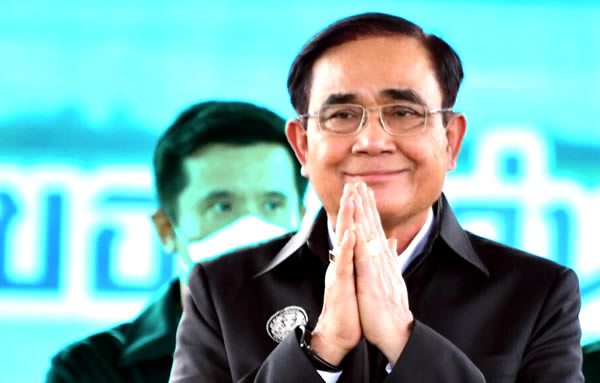 Political experts and commentators have been talking up the prospects of the Bhumjaithai Party as a ‘neutral’ actor on the receiving end of defections with reports of further in the pipeline before the next General Election. However, the party’s opinion poll support in national terms remains at 2.4%, just behind even newly formed parties and certainly behind the Pheu Thai, Move Forward, the Democrats and even Palang Pracharat. Recent bye-elections and opinion polls point to growing support for both the Pheu Thai Party on one side of the political divide and the Democrat Party on the other despite the long-winded prognostications of experts forecasting Bhumjaithai Party leader, Anutin Charnvirakul, as the next prime minister.

On Saturday, General Prayut Chan ocha hailed his government’s economic achievements this year as it is thought a General Election will be called in late November. An opinion poll in Southern provinces, on Sunday, showed the PM, who has been in office since 2014, leading the field among southern voters as the most popular choice for prime minister with 23.94% support. However, the kingdom’s political future is very muddled right now with the legal basis for the next election up in the air while a path back to power for Prayut next summer looks tortuous and hard to see clearly. This is due to strong support for the opposition Pheu Thai Party and on the other side of the political divide, the Democrat Party.

There are growing indications that Prime Minister Prayut Chan ocha may call a General Election at the end of November after the Asia-Pacific Economic Cooperation (APEC) Summit leading to a poll in 2023, somewhat earlier than the May 7th date set tentatively by the Election Commission in September.

A hint towards this possibility came from government chief whip and Nakhon Sawan MP, Nirote Sunthornlekha, at the end of last week when he suggested the Palang Pracharat Party required a new economic expert and named former governor of the Bank of Thailand Pridiyathorn Devakula for the role of economic adviser to the party and possibly the next government economic czar if the party finds itself in power again next summer replacing the incumbent, Deputy Prime Minister Supattanapong Punmeechaow.

Mom Rajawongse Pridiyathorn Devakula is a respected Thai economist who served as Minister of Finance and Deputy Prime Minister in the post-coup government of Prime Minister Surayud Chulanont from October 2006 to march 2007.

Before his role in government, he had served as the Bank of Thailand governor from May 2001 during the Thaksin era.

‘An ideal candidate is Mr Pridiyathorn Devakula who is very much needed to help lead Thailand’s strategy to cope with the lasting economic impact of the Covid-19 pandemic at the macroeconomic level,’ Mr Nirote declared on Thursday while adding that matters regarding the party’s preparation for a General Election would be cleared up after the Asia-Pacific Economic Cooperation (APEC) summit running from November 18th to 19th.

Kingdom is hurtling towards an election but the legal basis is, as yet, highly uncertain with the new electoral laws before the Constitutional Court

The kingdom is hurtling towards a General Election early next year while at the same time, it is not clear what the basis for the poll will be as key voting laws are currently being reviewed by the Constitutional Court with a decision from it only due earlier next year.

The same poll showed 21.5% support for Paetongtarn Shinawatra, the daughter of Thaksin Shinawatra as Prime Minister although the party is also considering other choices as nominees such as business tycoon Srettha Thavisin.

Political commentators and analysts are suggesting that the Bhumjaithai Party, led by Deputy Prime Minister Anutin Charnvirakul, will improve its parliamentary position after the 2023 General Election suggesting at least 60 and perhaps 80 seats from its current tally of 59 after the party increased its sitting MPs during the current parliament from its 2019 election haul of 51.

These claims are being made based on what are termed ‘dao ruek’ or ‘stars’ who are said to be ready to defect to the party from other political groups based on its financial backing and in particular, the backing of the Chidchob family in Buriram.

The message is that these politicians deliver their votes at the local constituency level despite national opinion polls.

The opinion polls, however, consistently show the Bhumjaithai Party faring below the Pheu Thai Party, the Democrat Party and even the Palang Pracharat Party in polls across the country from the north to the south over recent weeks and in Bangkok where it has very little support at all.

Bhumjaithai Party had only 2.32% support in September, less than half the Palang Pracharat Party and a third of the Democrat Party in a big opinion poll

Its consistent opinion poll ratings such as the 2.32% it polled in the authoritative NIDA poll nationwide in September, a poll which showed the Democrat Party on 7.56% support with Palang Pracharat Party on 5.56%, should raise questions about the runaway speculation as to its coming success.

Indeed, the one thing all polls and by-elections have been showing this year is renewed enthusiasm and support for the Democrat Party, on one hand, and the Pheu Thai Party on the other.

On Sunday, there was a boost for Prime Minister Prayut Chan ocha when the NIDA poll in southern provinces, published in the Bangkok Post, saw him emerge as the most popular choice for the top job in these provinces with 23.94% support followed by ‘Ung Ing’ or Paetongtarn Shinawatra in second place with 13.24%.

The Democrat Party led the field with the political party receiving the support of 27.64% of those polled followed by Pheu Thai on 15.54% with Palang Pracharat on 11.89%.

The Bhumjaithai Party is known to be targeting the south where it faces a major political backlash from conservative and Muslim voters over its marijuana policy and is only polling 6.95%.

The opinion polls consistently show only tepid support for the Bhumjaithai Party despite the long-winded prognostications forecasting its controversial leader, Anutin Charnvirakul, as the next prime minister.

This is the minister who, as Public Health minister, presided over the country’s vaccine debacle last year and who was at the forefront of support for heavy-handed measures which collapsed and did permanent damage to both the country’s domestic economy and its foreign tourism industry in response to the emergency.

His role in pursuing an obtuse cannabis legalisation policy that has seen the effective legalisation of recreational cannabis, is already leading to a backlash against his party which commentators seem reluctant to acknowledge but which will come to benefit the Democrat Party who have taken a strong line against it.

Meanwhile, the Prime Minister took to social media, on Saturday, to highlight his government’s role in opening the country to foreign tourism following the pandemic and said occupancy rates in hotels are now steadily rising with 5.8 million visitors having arrived in the country from January 1st up to September 25th last, making the government’s target of 10 million foreign tourist arrivals this year quite achievable.

General Prayut also highlighted that the kingdom’s tax take for the opening 11 months of this fiscal year to September 3oth 2022 had shown tax revenue of ฿2.2 trillion or 5.5% more than targeted and 6.8% ahead of the figure seen last year.

The PM also drew attention to 323 investment projects led by firms from countries such as Japan, Singapore, the United States, Hong Kong and China which invested ฿73.635 billion in Thailand in the first seven months of the year with ฿30 billion being ploughed into the Eastern Economic Corridor (EEC) project which, he said, had increased its employment since 2021 by a further 3,000 hi-tech jobs.

General Prayut spoke of a coming economic stimulus package which will be applied to the economy by his government to boost consumer spending in a week where Minister of Finance Arkhom Termpittayapaisith confidently predicted that Thailand’s GDP growth for 2022 will come in, as predicted, somewhere between 3% and 3.5% this year.

The stage is being set for an election with an impossibly wide variety of variables such as the legal basis for counting votes, the continued role of the junta-appointed Senate, the 250-member upper house which will be eligible to vote as part of what should be a last joint sitting of the assembly to elect a prime minister under the 2017 Constitution and the performance of the political parties in the forthcoming poll in a country that is polarised from North to South in its politics and haunted by the spectre of contrived political instability followed by military coups such as seen in 2006 and 2014, events which have severely scarred the country’s politics and its economic prospects.

Another key factor is the whipping up of polarised politics by comments and actions since September as support and momentum for the Pheu Thai Party appeared to be growing.

This week, Thailand was gripped by the drama of a Red Shirt leader, Mr Weerawich Runruangsiriphol, physically assaulting well-known constitutional activist Srisuwan Janya, the leader of the Association for the Protection of the Thai Constitution (APTC) with a kick to the chin.

The incident, caught on cameras which were present, happened as Mr Srisuwan Janya visited the Central Investigation Bureau (CIB) to file a complaint against a well-known comedian who had poked fun at Deputy Prime Minister Prawit Wongsuwan.

The television footage of the incident coupled with incendiary remarks from ex-aides and former government officials as to the possibility of a coup if a member of the Thaksin family is reelected to power, have all raised disturbing questions about the stability of Thailand’s democracy and the country’s political dysfunctionality outside the rule of law or even where the laws are not yet defined.

At this point, with key developments yet to unfold, in particular the verdict on the voting laws, the public’s thinking is influenced strongly, at this time, by a desire for more rapid economic progress but also an aversion to political instability and chaos.

The future political course or government that may emerge in the summer of 2023 is anything but clear.