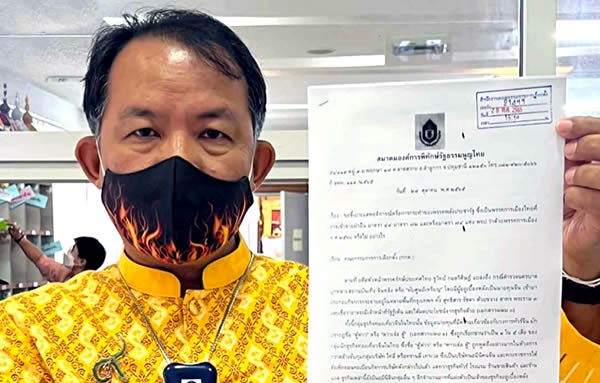 Police enquiries into the financing of the highly unusual and illegal nightclub that began on Wednesday had been focusing on the owner and financial backer behind the venture which sources describe as a Chinese drug kingpin who may have links also to illegal activities in Pattaya. If the donation accepted by the Palang Pracharat Party can be shown to be linked to illegal or dirty money, then it is just another one of the legal perils it is now facing after the donation of ฿3 million was confirmed by Justice Minister Somsak Thepsutin on Friday.

Thai politics was rocked on Friday by a revelation that a Chinese businessman being linked to the illegal nightclub raided by police on Wednesday morning in an operation which saw 237 people arrested and huge quantities of illegal narcotics seized, donated ฿3 million to the ruling Palang Pracharat Party in 2021. Constitutional activist and firebrand Srisuwan Janya is calling for a full enquiry into the legal status of the Chinese man, his links with possible illegal activities and reports that he obtained Thai citizenship before he set up his business in the kingdom. He called for a report from the Election Commission and the Registrar of Political Parties with a view to filing a petition with the Constitutional Court if, appropriate, to have the ruling party dissolved, a move which could see top politicians also barred from politics if it is found that strict electoral laws were breached.

Thai politics in the months leading up to a General Election may be shaken by an earthquake moment after revelations on Friday that a wealthy Chinese businessman who sources had linked to an illegal drugs nightclub which was raided by over 100 members of the Metropolitan Police Bureau on Wednesday morning, donated ฿3 million to the ruling Palang Pracharat Party in 2021.

The Chinese man has denied any links with the establishment in the Sathorn district of Bangkok and pointed out that the properties in question were owned by a Chinese community organisation called the Hainan Association of Thailand which rented them to a third-party operator.

Metropolitan police investigating the raid say they have information as to the ultimate beneficial owner of the properties but are not divulging it at this point in their enquiries.

The donation was confirmed on Friday by the Chairman of the party’s strategy panel and justice minister Somsak Thepsutin.

Documentation has also emerged showing a record of the donation last year.

The shocking revelation has led to a pledge from the Election Commission that it will investigate the matter urgently and a petition from constitutional activist, Srisuwan Janya, calling for the Palang Pracharat Party to be disbanded if it is shown that a breach of the country’s strict electoral laws has taken place.

A source within the body confirmed that the donation was real and that serious questions must now be addressed.

It is being reported that the businessman from China obtained Thai citizenship last year and set up a business in the kingdom.

Police on Wednesday seized 34 luxury cars including a Rolls Royce, at least ฿1.3 million in cash from 2 safes while being unable to open four others at a nightclub drug emporium managed by a Chinese man name as Mr Hai Tao Huang who was arrested at the scene.

The raid, which saw the police chief in the Yannawa area of Bangkok in Sathorn removed from his post, targeted a complex of buildings on the Charoen Rat Road where 237 people were arrested, nearly all of whom were Chinese of which 104 later tested positive for drugs and were handed down suspended jail sentences in court.

Police investigators, on Wednesday, linked the operation of the club to a bigger kingpin, a Chinese figure who they believed provided the finance for the concern.

There are also indications that the illegal activity in Bangkok may also be linked to illegal drug-running operations in Pattaya.

A key issue to be established now is whether the Chinese man donated the money before he became a Thai citizen or whether he retains dual citizenship as a Chinese national also.

In both situations, the Palang Pracharat Party may face almost certain dissolution under Section 74 of the organic law on political parties.

As it stands, the links between this businessman and the drug emporium in Bangkok are highly damaging, coming in the midst of a police crackdown on illegal drugs ordered from the top by the government which the ruling party leads.

On Friday, Srisuwan Janya of the Association for the Protection of the Thai Constitution (APTC) called on the Secretary-general of the Election Commission to prioritise this matter with the registrar of political parties and respond with a report, including a possible recommendation to the Constitutional Court on the basis of his complaint, which could lead to the ruling political party being disbanded for accepting an illegal donation.

Such an outcome would have consequences for the leadership of the party including key government figures and ministers.

Mr Srisuwan said that all parties were prohibited from accepting funding from foreign donors or Thai juristic entities linked with foreign shareholders.

He also pointed out that if the money donated can be shown to be linked with illegal activities, then the party would also find itself facing dissolution.

Justice Minister, Mr Somsak, on Friday was upfront about the donation and it appears no attempt was made to hide it last year.

It was properly processed in line with legal requirements.

The minister told reporters that the party did not have the resources to screen every donor and that the donation may have become about due to the fact that the donor liked the party’s policies.

He said that his information was that the businessman was not well known to party members, adding that if that was to turn out otherwise, then the party would certainly face being dissolved.