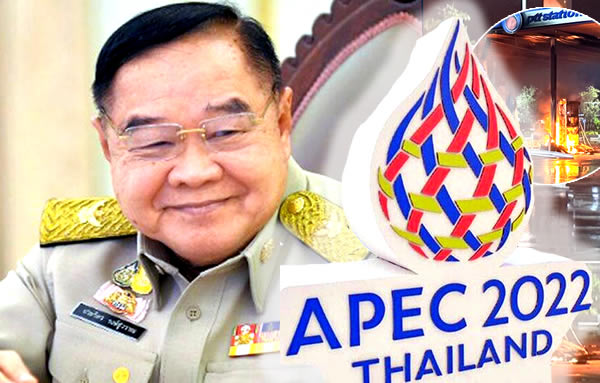 Deputy Prime Minister issued a new order to Internal Security Operations Command (ISOC) in the South and other agencies to step up already heightened vigilance as the government fears the APEC Summit may be used by subversive and protest groups to highlight their cause and damage the kingdom’s image during the two-day event which is being viewed as important to the country and a watershed moment in its political development.

Thai authorities have moved to a heightened sense of alert just days before the Asia-Pacific Economic Cooperation (APEC) Summit in Bangkok with the government fearing that subversive elements both within and without the country may use the high-profile event as a protest platform. Over the last few days, senior officials and government spokespeople have urged the public to assist them in reporting any suspicious activity. The latest development is a series of incendiary bombs in Thailand’s southern provinces which had led Deputy Prime Minister Prawit Wongsuwan to order even stronger measures to counter any potential threat.

Thailand’s Deputy Prime Minister Prawit Wongsuwan, on Wednesday, ordered all security agencies to tighten security even further after a series of petrol stations were bombed in the southern province of Pattani.

No one was injured in the attacks on the state-owned PTT service stations which have now become frequent targets for insurgents in four southern provinces.

General Prawit, who has a special responsibility in the Thai government for internal security, tasked all security services to increase surveillance on subversive groups and be capable of responding to any threat that arises.

In particular, he urged Internal Security Operations Command (ISOC) in the southern provinces to examine its current disposition to such threats.

The press, on Wednesday, was briefed by a spokesman for the deputy prime minister, General Koncheep Tantravanich.

It comes just hours before leading delegations are due to arrive in Bangkok and amid anxiety about any potential threat.

The military liaison officer also appealed to the Thai public to be circumspect at this time in the days leading up to the Asia-Pacific Economic Cooperation (APEC) summit in Bangkok as authorities fear that such groups may plan to use the occasion to tarnish Thailand’s image abroad and draw attention to their cause.

Thai security agencies are mounting a huge security operation in Bangkok to protect the delegates and leaders of countries from the Asia Pacific and around the world who will attend the international geopolitical event from November 18th to 19th.

Thailand will find itself host to world leaders such as President Xi Jinping of China and US Vice President Kamala Harris.

In Thailand, the occasion is seen by the public and the government as a watershed moment enhancing the prestige of the country and its government with strong speculation that the leadership of the coalition led by General Prayut Chan ocha including the prime minister himself, may use the aftermath of the event to announce key new developments.

The government, as well as setting up a security cordon around the venue for the summit at the Queen Sirikit National Convention Centre in central Bangkok and up to twenty key hotels which will be home to foreign dignitaries, has prohibited protests in the vicinity while also closing down key roads to traffic or potential protest rallies.

At the same time, protest groups around the country have sensed the government’s vulnerability at this time and are attempting to use the event to question key government policies including opposition from some unlikely quarters.

On Thai national TV, this week, appearing with senior officers from the Royal Thai Police and Government House requesting the public to show respect for the event and Thailand’s image abroad, a young woman named Mind Passaravali, representing a group that styles itself as ‘People stop APEC 2022’, called on the public to protest against the event.

Tensions are running high before the event

The protest group which has held rallies in Bangkok in recent days, which have been sparsely attended, are threatening to march on the summit venue despite being told that they will be prohibited from doing so and being urged to show restraint.

Tensions linked to the event were seen on Wednesday when police discovered a black bag at the Queen Sirikit Convention Centre sparking a security alert with a bomb disposal expert called until a member of the foreign media came forward to claim the bag, admitting that he had left it behind.

While she also voiced her opposition to Prime Minister Prayut Chan ocha and his administration, she particularly called on the government to cancel the policy which was highlighted proudly by General Prayut at last weekend’s ASEAN summit to burnish Thailand’s credentials in the international fight against climate change, as a national policy presented by the government on the world stage but which may not be in the best interest of ordinary Thai people.

Responding on national TV, government deputy spokesperson, Ratchada Thanadirekk, asked Ms Mind and other potential protesters to respect the image of the country at this time of the Asia-Pacific Economic Cooperation (APEC) Summit when it will be in the spotlight.

Ms Ratchada also praised the government’s Bio-Circular-Green (BCG) policy as being in line with global trends and Thailand’s commitment as well as its duty under UN Sustainable Development Guidelines.

Immigration Bureau has already deported 2,000 people from Thailand while warning undesirable aliens not to travel here and arresting others

The lead-up to the Asia-Pacific Economic Cooperation (APEC) Summit has also seen a crackdown launched by the Immigration Bureau led by Police Lieutenant General Pakpoomphiphat Satchaphan in recent weeks which has seen thousands rounded up across the kingdom from the underworld of people trafficking to Western and Asian fraudsters who have been using Thailand to avoid arrest warrants and law enforcement authorities in their home countries.

A 62-year-old South Korean was arrested after defrauding investors in South Korea out of ฿100 million in 2016 and 2017 with a scheme to sell second-hand clothes in the Thai market through a chain of 20 to 30 stores at inflated prices of between 300% to 1,500% of the price in South Korea.

An Austrian, living in a hotel in Phang-nga, was arrested on foot of an international arrest warrant issued by the European Union after warrants were issued for his arrest in his home country on charges of social security and bankruptcy fraud.

The Immigration Bureau also announced details of a crackdown launched against illegal Chinese gambling sites operating in Thailand with no less than 56 Chinese salaried employees earning between ฿40,000 and ฿70,000 a month, working on a network of sites with a turnover of ฿500 million, taken into custody.

All were found to have entered Thailand on normal tourist visas and to have overstayed their permission to reside in the country. They are to be prosecuted in accordance with the Immigration Act.

A further 88 people were arrested in the provinces of Prachuap Khiri Khan and Kanchanaburi for working illegally in the kingdom.

Finally, police revealed that an Indian national had been arrested in the northeastern province of Surin for allegedly extorting money for protection from fellow Indian expats in the area by pretending to have the support of key local police officers.

The Immigration Bureau and its chief, Police Lieutenant General Pakpoomphiphat Satchaphan are also asking the public to report any suspicious activity linked to foreigners on the 1178 hotline number or to any local police station or Immigration Bureau office.

Last Sunday, Police Lieutenant General Pakpoomphiphat emphasised that all foreign arrivals are now being looked at closely and that the operation had already seen 2,000 people stopped from entering the kingdom and immediately deported.

‘Those who are found to be involved in suspicious activities will be questioned and deported,’ he warned.

He explained that the Immigration Bureau was coordinating with other governments and police agencies to make sure that Thai database systems were completely up to date and able to detect any potential external threat on entry to the country.

In this respect, two Chinese nationals were arrested in recent weeks after they were found to be the subject of Interpol Red Notices requesting their immediate arrest and detention for activities linked to fraud.

Taiwanese scam call centre boss arrested after his ฿24 million Ferrari was found at a local Bangkok shopping centre, he was using a Cambodian passport

One was a 27-year-old Chinese man who built a fraudulent app which caused 300,000 victims to lose ฿50 million. The app was run by the man and an accomplice in China. It involved online investing promising future profits to its victims.

A second man arrested on the Interpol list was a 40-year-old Chinese national who was found to be living and active in the environs of Suvarnabhumi Airport in Samut Prakan after a police sweep looking for him was carried out following his recorded entry to Thailand.

The man was later arrested following a tip-off to Thai police at a home in the Sutthisan area of Bangkok near Ratchadapisek.

A Taiwanese man, suspected of involvement in the management of scam call centres in the Philippines, was also picked up by Immigration Bureau police after they located his ฿24 million Ferrari car in a local shopping centre car park in downtown Bangkok.

The Tawainese fraudster was travelling using a Cambodian passport which police found, through biometric data, was linked to his Taiwanese identity and two previous Taiwanese passports which proved to be counterfeit.