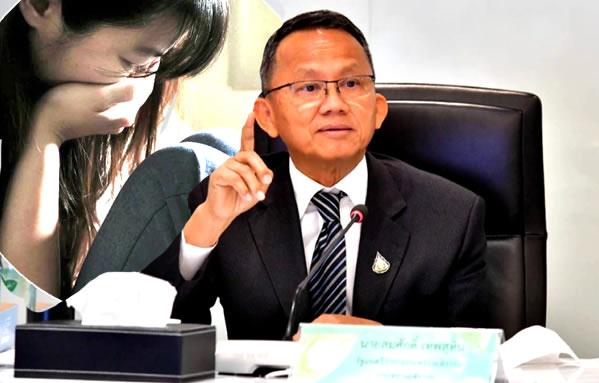 New law, championed by Minister of Justice Somsak Thepsutin will come into effect on January 23rd next and is designed to help police deal with the threat posed by a small minority of dangerous and repeat offenders. It comes as Thailand prepares for a General Election next year where crime will be a key issue with concerns over drugs and appalling statistics linked to the abuse of women having captured the public’s attention.

The justice minister, this week, underlined a new law coming into force in January 2023 which will allow dangerous offenders to be detained by police on an emergency basis as well as requiring repeat offenders or those thought to be at risk of committing further offences to wear ankle bracelets for up to 10 years after being released from prison. Somsak Thepsutin was speaking after horrific details of a serial rapist in Ubon Ratchathani came to light this week. A 41-year-old repeat offender who falsely imprisoned and raped two women over two nights from November 20th to November 22nd was found to have committed six other similar offences before being recently released from prison. The news comes as details released on November 25th by the Ministry of Public Health show that young Thai girls between 10 and 14 years of age form 31% of the over 8,500 women and girls who are physically and sexually abused in Thailand each year.

Thailand’s reforming Minister of Justice, Somsak Thepsutin, a member of the Sam Mitr faction of the ruling Palang Pracharat Party but currently at the centre of media speculation as Thailand’s political firmament rearranges itself with Prime Minister Prayut Chan ocha expected to team up with the newly formed Seri Ruam Thai Party in preparation for the General Election expected in 2023, has come out on Tuesday to emphasise the value of a new law coming into force next January allowing for the tagging of dangerous and repeat offenders for up to 10 years with a new watchlist for potentially dangerous and repeat offenders coming into force.

The minister was speaking after news of a brutal attack and rape of an 18-year-old woman in Ubon Ratchathani came to light in recent days shocking the kingdom where rising crime is emerging as a key grassroots issue.

Voters on the ground are concerned by the rise in illicit drug use as well as the widespread violence and terror being inflicted on women and girls reported daily in the Thai media.

Minister Somsak, on Tuesday, urged the public to embrace his initiative to create such a watchlist saying it would help to protect potential victims of crime particularly women with growing concerns in the kingdom at the alarmingly high number of cases where women are being attacked both inside and outside the home.

Earlier this week, the Department of Disease Control at the Ministry of Public Health released figures showing that no less than 8,500 Thai females experienced physical or sexual violence both at home and in the work environment each year in an extended study.

The data revealed by Director-general, Dr Thares Krassanairawiwong, was released to coincide with the United Nations ‘International Day for the Elimination of Violence Against Women’ on November 25th.

Young girls aged between 10 and 14 years of age make up 31% of the 8,500 female victims annually who are physically and sexually abused in Thailand

The figures spanned the period from 2019 to the end of 2021 and found that young girls aged between 10 and 14 years old represented 31% of the victims, a horrifying figure.

The Deputy Director-general of the Department of Disease Control said the solution to this problem must begin at home and lies with every individual taking responsibility within local communities.

On Tuesday, Minister Somsak highlighted Thailand’s proposed new law under Section 3 of the Measures for the Prevention of Repeated Offenses in Sex Offenses Act which allows authorities to place such offenders, where appropriate, on a watch list of dangerous people where they may be forced, even after they are released from prison, to wear monitoring tags for up to 10 years.

The case which prompted Minister Somsak to speak out involved the premeditated assault, abduction and rape of an 18-year-old woman who was visiting a local public park in search of her sister who had been sleeping rough in Ubon Ratchathani, in northeastern Thailand bordering Cambodia, on November 20th last.

Two days later, when officers arrested the 41-year-old man responsible in a police raid, they also found a second young woman, another rape and false imprisonment victim, being held by him.

Police investigating the case have released CCTV footage showing Mr Pathanin Jen stalking his first victim as she pulled up on a motorbike at the Thung Sri Muang Park in the heart of Ubon Ratchathani.

After she had parked her motorbike on Sunday 20th November, Mr Pathanin sneaked up behind her and kicked her in the neck. When she fell to the ground he descended on her, hitting her repeatedly.

18-year-old woman knocked unconscious, imprisoned and then raped repeatedly by a 41-year-old man who accosted her at a city centre park

The assailant, at first dragged her body into the park but then changed his mind and took her in a state of unconsciousness on a bicycle to his rented room nearby.

He repeatedly raped her.

The woman was later released by her captor and in a battered and bruised state, she went to the local police station to report her ordeal.

Police were able to confirm her report from the CCTV footage and later raided the man’s room where they found him holding another young woman prisoner who he had already raped.

The second girl, from Sisaket province, had been imprisoned by the man a day earlier after she arrived in the province on a tour bus having left home on an earlier date in pursuit of a boyfriend in Sisaket province and then moving to Ubon Ratchathani.

Second victim, hours later, befriended off a bus from Sisaket province then held against her will and raped by the repeat offender just out of prison

The second victim told police that he had earned her trust by telling her that he was a friend of her family and a distant relative.

Police found that the man had just been released from prison and had been involved in 6 other cases of a similar nature as part of his long criminal history.

Mr Somsak said the man was just the sort of person that the new legislation, currently being finalised before an official committee, was designed to address.

The new law would also give police powers to detain people who police associate with dangerous behaviour as an emergency provision, he said.

It is expected to take effect in Thailand on the 23rd of January next.

Compensation for victims of such crimes

Minister Somsak also highlighted measures in the new legislation that would provide for compensation payments to victims of such crimes of ฿110,000 including ฿50,000 for damages, ฿40,000 for medical expenses and ฿20,000 towards mental rehabilitation costs.

‘My intent is to push forward the law against recidivism in order to control these people from repeating the same incidents and create safety for society, especially women, so Mr Patanin will be under surveillance even after he is released from prison according to the new law. It will come into effect on the 23rd of January,’ he told reporters.

Police investigate the rape of a party hostess in Chonburi, three men accused have been arrested

Police in Bangkok and Pattaya hunt down sexual monster who terrorised, raped scores of women with impunity

Frenchman’s car stopped in Phuket, charged with the violent hotel rape of a 29 year old UK woman in Patpong