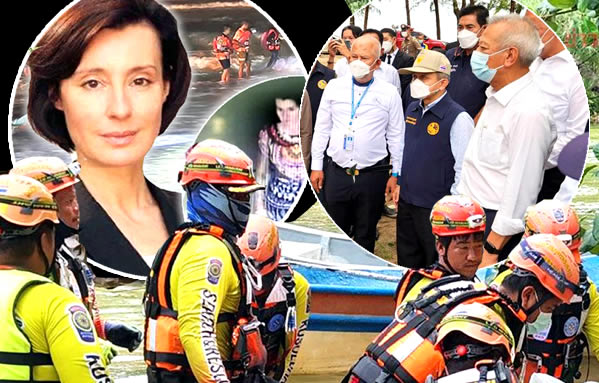 52-year-old Ms Elena Rusradchenko had been missing for 6 days. Officials earlier this week declared her lost at sea after an exhaustive search off Naithon Beach and onshore failed to find her. Prime Minister Prayut Chan ocha thanked all those involved and noted the sad ending.

The body of 53-year-old Russian woman Elena Rusradchenko was recovered in an operation some 30 km off Patong Beach in Phuket on Wednesday morning and brought ashore to be received by Tourism Minister Phiphat Ratchakitprakarn. The Russian woman went missing on Thursday, October 20th, while swimming on Naithon Beach. Prime Minister Prayut Chan ocha, while speaking with officials in Phuket, offered his sympathy to the Russian woman’s friends and family saying Thailand regretted her death.

Prime Minister Prayut Chan ocha, on Wednesday, expressed his condolences to the friends and family of Russian woman Elena Rusradchenko whose body was found approximately 30 km off Patong Beach in Phuket on Wednesday morning by a fisherman working in the area.

He located the body at a point which is believed to have been near Tri Trang Beach in the Kathu district of the holiday island.

PM reminds people that everyone has brothers, sisters and family as he sympathised with those close to the Russian woman after her body was found at sea

Prime Minister Prayut Chan ocha said that the government regretted the Russian woman’s death and that it strives to prevent such occurrences.

He said everyone had either brothers, sisters, family or loved ones and therefore could sympathise with those close to the Russian woman on their loss.

General Prayut thanked all those involved in the search for the foreign national as he spoke to provincial officials from Bangkok and noted that it had now been brought to an ultimately sad conclusion.

The fisherman who discovered the body saw it floating in the sea, some 40 km from where Ms Rusradchenko was last seen alive some 6 days previously on the 20th of October as CCTV footage caught a fleeting image of her changing shoes near where she left sandals and other clothing items on Naithon beach in te Thalang district of Phuket where she was staying with friends in the nearby Naithonburi Hotel.

She had arrived in Phuket on the 16th of October and was due to depart on the 29th of the month.

On Wednesday morning, when notified of the sighting, the Phuket Marine Police and a local rescue unit, the Kusalatham Phuket Foundation, travelled to the area off Patong Beach where the Russian woman’s body was found among debris floating in the sea.

The body was recovered and brought ashore on Layan Beach located in a National Park area of the Choengthele sub-district of Thalang at approximately 9.10 am where Minister of Tourism and Sports Phiphat Ratchakitprakarn was waiting.

The body was then taken to Vachira Phuket Hospital where an autopsy procedure was to be performed.

53-year-old Ms Rusradchenko was a senior financial officer with a private company in Russia.

Her disappearance was reported to police on Friday 21st, the day after she went missing by her partner who was staying with her at the hotel.

A huge search was mounted including the deployment of forces from the navy and marine police both offshore and onshore near Naithon Beach but was wound down after four days with officials believing her to have been lost at sea.

It is reported that the woman was found wearing her long sleeve swimming apparel amid reports that she emerged from the water with others on Thursday, October 20th during a storm when swimmers were called ashore by a lifeguard on duty.

It is now thought that Ms Rusradchenko walked a distance from that point and later re-entered the stormy waters.

Blow for travellers: strict rules, no bars and entertainment venues allowed to open in Phuket