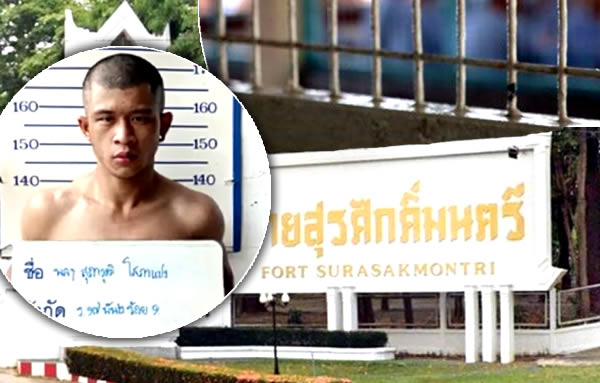 The soldier has a history of illegal activity, being arrested on October 6th last year and was the subject of a military arrest warrant when local police nabbed him for dealing in methamphetamine pills in public in a sting operation.

A renegade soldier involved in drug dealing in northern Lampang province has broken out of detention at a local military installation after his arrest on October 5th by police in the province while in the act of selling 50 methamphetamine pills.

A manhunt is underway in the northern Thai province of Lampang after a 26-year-old soldier escaped from military detention at the 17th century Fort Suaraksamonto in the province after his arrest last week for possession of methamphetamine pills and drug dealing.

Reports suggest that the man, wearing a blue T-shirt and white shorts with cropped hair, managed to take advantage of a change of shifts at the detention facility to climb over a fence before stealing an old Honda Wave motorcycle registration No. 4043, Lampang, owned by a resident of the village surrounding the military post.

On October 5th this year, he was observed in the process of exchanging 50 methamphetamine pills for ฿1,300 until police moved in to arrest him.

The soldier was also the subject of an arrest warrant 10/2565 issued by the 32nd Military District Court on June 1st this year.

It is reported that military authorities in Lampang have set up an investigative committee into the escape of the soldier and his drug dealing activities.

A search of his home following his arrest on the Lampang-Mae Tha road by police later unearthed a further 40 methamphetamine pills.

The case was being handled by police at Khelang Nakhon Police Station who last week handed over Mr Supawut into military custody so that his case could be dealt with by a military court in Lampang.

It is being reported that both police and military are now actively seeking the whereabouts of the suspect including monitoring CCTV footage throughout the area and the deployment of search teams.