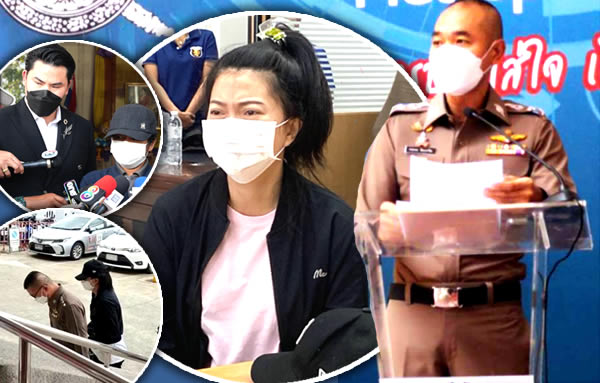 It has emerged that the 43-year-old policewoman, jailed on Monday after being refused bail, was working within Thailand’s Internal Security Operations Command (ISOC), the equivalent of the US Department of Homeland security and which reports to the Prime Minister’s Office. The Provincial Police chief in Ratchaburi this week also raised the fact that the woman was 38 years old when she joined the police force in 2017 as one of the many circumstances that are difficult to understand about this case.

A high-profile case involving a police officer abusing her maid over a two-year period is turning into a deepening investigation into corruption which is raising disturbing questions about the accused’s possible links with a Thai senator appointed by the previous junta. The accused woman has told investigating officers that she landed her position in the police through her links with a senior influential figure even though she was over age and only possessed a vocational-level certificate in accounting. The 43-year-old was denied bail by Ratchaburi Provincial Court this week after it was told her victim feared for her safety if she was released.

Assistant National Police Commissioner Police Lieutenant General Surachate Hakparn has assured the Thai public that police are conducting a transparent and in-depth inquiry into the unusual case and circumstances surrounding the high-profile arrest last Saturday of a police officer serving with the Special Branch Unit of the Royal Thai Police.

43-year-old Police Corporal Kornsasi Buayaem is currently being detained at Ratchaburi Central Prison after the Provincial Court, on Monday, denied her bail application in response to a police application to detain her for 12 days as an investigation into charges of assault, false imprisonment and human trafficking proceed.

Case has generated both national and international attention after being aired on Thai national TV but since then, disturbing questions have been raised

The case has generated both national and international media attention since last week when a Channel 3 TV programme revealed the nightmare of a 30-year-old woman being held at Police Corporal Kornsasi’s home as a maid but who was treated as a slave and beaten regularly by the police officer.

The popular national TV programme, the Hone Krasae Show recalled to shocked Thai TV viewers how two years ago the victim in the case, named only as Miss A, went to work at a now-closed coffee shop owned by the police officer who told her that she was the mistress or minor wife of a Thai senator.

During a press conference on Tuesday, Police Lieutenant General Surachate or ‘Big Joke’ told the media that Police Corporal Kornsasi has told investigators that she obtained her job as a police officer in 2017 through the intercession of a ‘Phu Yai’.

In Thailand, this is a term taken to mean a senior figure of authority.

Investigators have been studying the qualifications of Police Corporal Kornsasi who holds only a vocational certificate and who appears to have been recently transferred from Internal Security Operations Command (ISOC) Region 4 to the Special Branch of the Royal Thai Police in Ratchaburi.

Internal Security Operations Command (ISOC) is the equivalent of the US Department of Homeland Security where it is reported that Police Corporal Kornsasi worked in a unit responsible for monitoring the news industry in the southern part of the country including Phuket.

The security organisation reports directly to the Prime Minister’s Office and primarily compiles intelligence while also coordinating security activities within the kingdom with Region 4 being responsible for southern Thailand.

The security organisation is also tasked with combating drug trafficking threats and countering the insurgency being waged in southern provinces which has been ongoing since 1948.

Police Major General Udon Wongchuen, who is the Commander of Special Branch Region 1 where the junior police officer was last assigned, told reporters on Tuesday, that the fact that Police Corporal Kornsasi joined the force at 38 years of age is another anomaly in this case.

He confirmed that Police Corporal Kornsasi had been moved to Internal Security Operations Command (ISOC) Region 4 in February 2022 in what was, according to him, a routine transfer.

The senior police officer said that an internal investigation into Police Corporal Kornsasi was ongoing.

The accused policewoman told investigators on the case that her qualifications were limited to a high school vocational certificate in accounting.

It has never been explained how the 30-year-old victim came to be enlisted as a soldier in the armed forces while being a maid for the accused.

Police Lieutenant General Surchate also told the media that the policewoman has told investigators that she was a coordinator for a Thai senator but has not produced any information to support her claims.

This has raised questions about the possibility of the policewoman receiving an allowance for the role paid for by the government.

On Tuesday, it is understood that the policewoman was taken from Ratchaburi Central Prison for a mental health evaluation as police investigators, working on the case against her, study a medical certificate presented by the accused on Saturday claiming that she was being treated for a psychiatric illness which made her emotional and not responsible for her actions at times.

It is now thought that this certificate was issued by a private medical facility in Bangkok.

The certificate states that Police Corporal Kornsasi has been receiving treatment since 2014 but police are looking for further information as to why the certificate was not signed by the treating physician in her case and why it did not specify a particular disease or condition that may be responsible for her alleged psychosis.

The document is dated the 19th of August, just one day before Police Corporal Kornsasi surrendered to police in Ratchaburi and confirms that she is receiving oral medication for the condition.

A spokesman for Thailand’s Medical Council, in recent days, said that this may not be unusual if a medical certificate is required urgently by a patient.

Another doctor or physician can issue the certificate if the patient has a clear medical history with the hospital or clinic.

He said that full information can be made available to police if applied for through the appropriate channels.

If the certificate is valid, the case of Police Corporal Kornsasi then raises further questions as to medical health screening when she was initially employed by the Royal Thai Police as well as her age and lack of qualifications.

On Tuesday, Police Lieutenant General Surachate, focusing on the criminal case before Ratchaburi police, said that there was clear evidence to suggest that Police Corporal Kornsasi was able to work normally in her role as a police officer and she did not exhibit any evidence or a mental disorder while performing her duties.

Details of a mental health evaluation on the detained policewoman are to be made available by investigators on Friday after she was examined at a state-run facility this week.

Big Joke also indicated that there was, as yet, no medical proof or substantial medical report to suggest that the accused was suffering from a psychiatric disorder.

The disturbing case is being monitored carefully by Royal Thai Police Headquarters in Bangkok where, on Tuesday, Police Colonel Kritsana Pattanacharoen confirmed that an internal disciplinary enquiry has been launched and is proceeding against the officer.

In addition to charges of assault, human trafficking and false imprisonment, the policewoman is also facing additional raps for dereliction of duty and intimidation of her maid, the 30-year-old Miss A.

The top police spokesman, this week, also told reporters that National Police Commissioner Suwat Jang­yod­suk has ordered priority to be given to the case and for it to be prosecuted expeditiously given the concerns raised in public.

At Monday’s hearing before Ratchaburi Provincial Court, the victim, in this case, Miss A through her legal representatives, objected to Police Corporal Kornsasi’s release on bail which had been put up by the accused’s family, because the maid felt that she would be in danger if the policewoman was at liberty.

Ratchaburi Police Station investigators are also reported to be looking at the involvement of a second, male police officer who may be complicit in the criminal acts carried out on the maid after a video clip purportedly made by the man was examined as part of the investigation.

It is understood that this individual left public service in April this year due to corruption allegations but investigators are preparing to charge him with dereliction of duty due to the content of the video clip and the fact that it appears to have been recorded by him.

Police Major General Piti Nareukhatpichai, the Chief of Provincial Police in Ratchaburi, has confirmed that investigators working on the case are leaving no stone unturned and have already retrieved evidentiary items from the accused’s home as part of the probe.

Among the allegations made by the maid were that she had her hair burned with hair tongs and that she was beaten with an iron bar by her employer.

Second police corporal to be charged if found to be complicit in the abuse suffered by Miss A, the victim

The police chief revealed the involvement of the other officer, another police corporal.

He said that the former member of the force will also be charged if it is determined he was involved in causing physical harm and committed criminal acts against the victim in the case.

The provincial police chief explained that investigators were looking very closely at the medical certificate submitted by the accused who admits assaulting the younger woman at her home but claims diminished capacity based on mental illness.

Last Thursday night, the young maid, Miss A, the 30-year-old victim who was abused by Police Corporal Kornsasi, explained on prime-time national TV that she was charged ฿500,000 by her employer to join the Royal Thai Army but was forced to resign from the force this May by her employer with threats of further beatings if she failed to do so.

On Tuesday, it was confirmed that the police officer was being held as a normal prisoner at Ratchaburi Central Prison, in Ratchaburi, a province over 122 km west of Bangkok and bordering Myanmar.

The serving police officer was being held with other prisoners in a supervision area for the first five days due to Covid measures.

The 43-year-old was reported to have experienced some moments of anxiety but overall, prison authorities deemed her not to be particularly under stress due to her incarceration at the facility.

The shocking details of Miss A’s ordeal were first revealed by a Thai online social activist Mr Kannarat Pongpaiboonvet or ‘Kun Chom Palang’ who this week also identified the other police officer at Ratchaburi Police Station.

Mr Kannarat warned, at the same time, that he was concerned for the safety of Miss A, the victim and has been coordinating with police investigators in Ratchaburi on the matter.