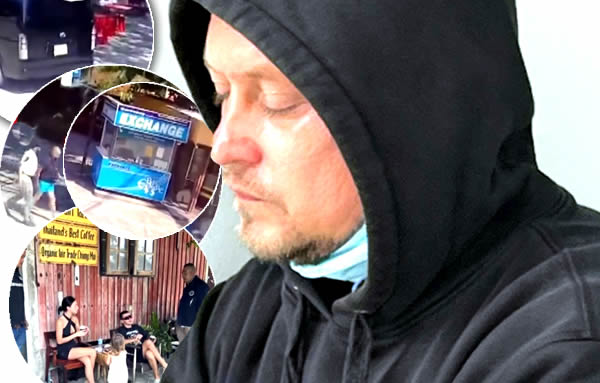 Ongoing investigation in Ko Samui but the arrested suspect brought from Chonburi is reported to be tight-lipped and unwilling to give police further information. The request by the victims for protection under the Witness Protection Programme is thought to be linked to suspected Russian mafia involvement in the intimidation and extortion of Mr and Mrs Abdullin.

A Russian couple who were extorted by what is thought to have been a gang with links to the Russian mafia has applied to join Thailand’s Witness Protection Programme even as police revealed the arrest of two people in connection with the extortion of $50,000 from 31-year-old Mr Evgenii Abdullin and his wife Ekaterina on Ko Samui on September 15th last and subsequent intimidation. One of those arrested is a Kazakh national detained by police on Wednesday afternoon in Chonburi while a 35-year-old Ukrainian man was also arrested on the island in Surat Thani.

The Russian couple who reported being extorted by a gang of six men to Ko Samui police on Monday has applied to Thailand’s Ministry of Justice looking to join the country’s witness protection programme.

The development comes after police, on Wednesday, arrested one of those responsible for the intimidation and extortion of $50,000 from the couple or ฿1.87 million on Thursday the 15th of September at Boy’s Organic Coffee Shop in the Taling-ngam area of Ko Samui, a favourite spot of 31-year-old Evgenii Abdullin and his 31-year-old wife Ekaterina Abdullin who are regular visitors to Thailand and who reportedly operate a real estate business on the island in Surat Thani province.

Police have so far identified four of the six men who took part in the extortion racket, two of whom, a Kazakh and Geman national, departed the country on September 17th and September 20th.

On Wednesday afternoon, 37-year-old Andrey Nizhegorodtsev was arrested in the Bang Lamung district of Chonburi near Pattaya where police also seized the black van used in the incident.

They also located and seized two red motorcycles on the island which are believed to have been hired by the gang.

Police have established that the international extortion crew were able to convert the $50,000 by having the bitcoin transferred to cash through a currency exchange kiosk on the side of the road on Ko Samui, footage of which has helped progress the case substantially.

Mr Andrey was arrested on foot of an arrest warrant issued by Ko Samui Provincial Court in recent days along with arrest warrants for 56-year-old Salman Almaty, the Kazakh who departed Thailand on September 17th and Tschingis Akhmadov, the 39-year-old German who flew out of the kingdom on September 20th as well as 42-year-old Vladimir Orekhov, a Russian national.

Police believe the Russian may still be somewhere in Thailand although he is thought to have departed Ko Samui while two other men who took part have yet to be identified.

Police are reported to have taken Mr Nizhegorodtsev to Ko Samui where he was formally identified by the Russian couple and questioned at length by police.

The suspect has not revealed any further details to investigators as to the background of the incident nor who his five accomplices were.

Ukrainian who assisted the gang, lived on Ko Samui and was known to the Russian couple on the island

In the meantime, police have also arrested a second individual in connection with the case, a 35-year-old Ukrainian national identified as Oleh Yasoshenko who resides in the Bo Phud area of Ko Samui.

Police discovered that Mr Yasoshenko purchased the tickets for the ferry services used by the gang to cross over to the island with the black van and later depart.

Officers are not yet clear if he was involved in the extortion racket or had any intimate knowledge of it.

They also report that Mr Yasoshenko was known to Mr and Mrs Abdullin, the victims in the case.

The Ukrainian is reported to have overstayed his visa to stay in Thailand and police on Ko Samui have confirmed that he will face legal proceedings concerning that offence.

Thailand’s Witness Protection Programme has been operating since 2003 when it was established by statute, decision for senior officers or a committee

The decision to grant witness protection to the Russian couple would be a matter for senior police or security officers and a committee.

Various options may be open to authorities such as disguising the couple’s identity or official history or documentation, assigning police or security officers to protect the couple or providing them with access to a safe house.

Like other witness protection programmes, protection is also offered to spouses and close family members of those accepted as part of the programme.

In Thailand, the witness protection programme is designed to offer protection for those assisting the police or security agencies linked with the suppression of narcotics, national security, cases involving sexual abuse, organised crime, any offence with a term of imprisonment over ten years or any circumstances deemed appropriate by Thailand’s Witness Protection Bureau (WPB).

Royal Thai Police unit, closely supervised by the Ministry of Justice and managed by the Department of Special Investigation. Used to fight corruption

Thailand’s witness protection laws afford extraordinary powers to police to arrest suspects and seize property in a situation where it is suspected a witness may be in danger from criminal elements.

The Witness Protection Bureau is ultimately controlled by the Royal Thai Police but it has been managed by the Department of Special Investigation (DSI) in close coordination with the Ministry of Justice.

It is seen in Thailand as a key tool in the country’s fight against corruption where whistleblowers who come forward with inside information are afforded special protection in return for their cooperation and testimony.

Russian couple arrested, charged and fined for having sex in public on a Pattaya beach shown on video clip