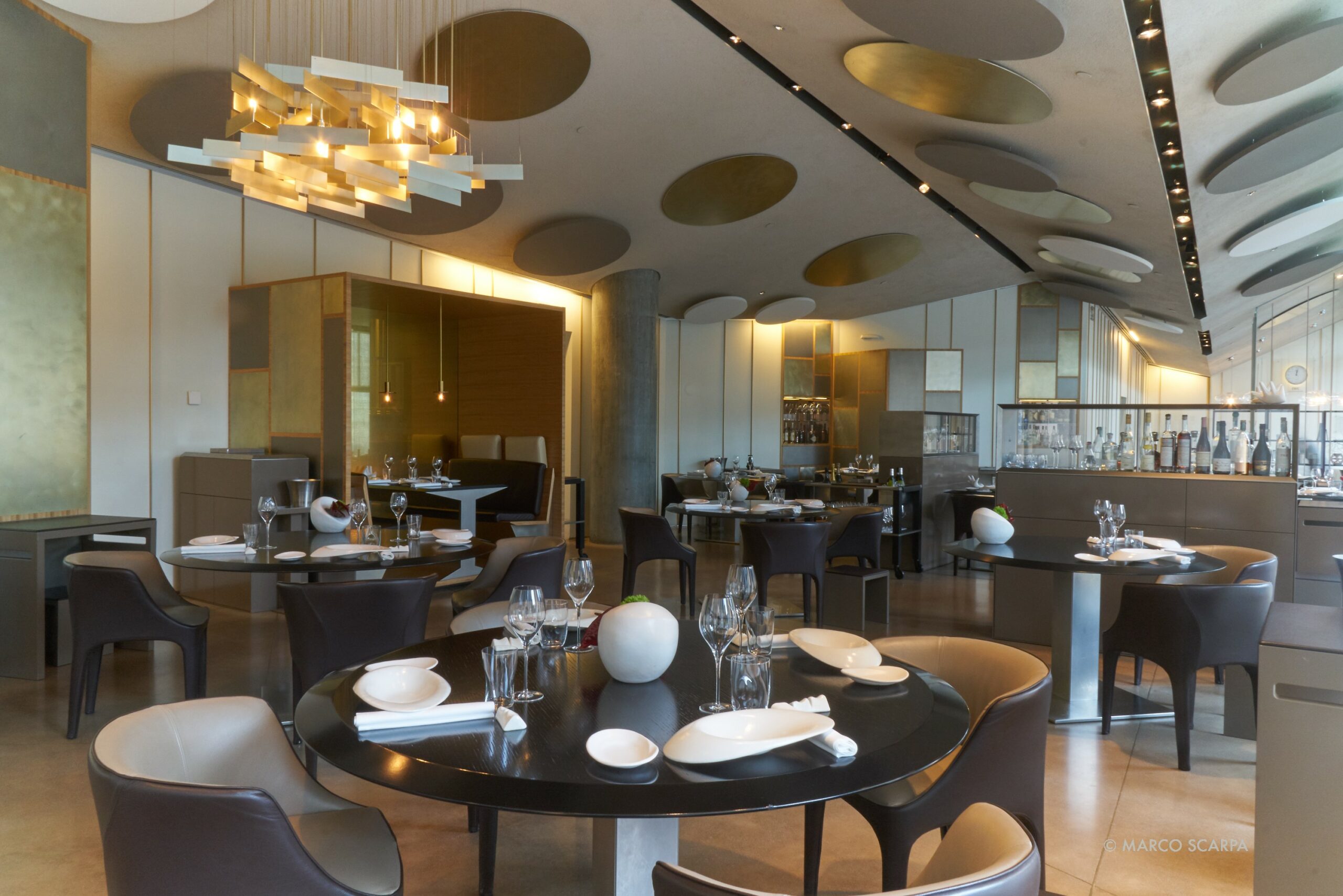 We met chef Andrea Berton in the Milanese restaurant that bears his name: Ristorante Berton, in the Porta Nuova district, Michelin star from 2014 until today.

Chef Berton’s career began in 1990, when he was nineteen when he arrived in Milan from his native Friuli to work alongside Gualtiero Marchesi.

In the prestigious palmares of Berton, among others, the collaboration with Alain Ducasse in Montecarlo at the Louis XV, before taking off with the Trussardi alla Scala restaurant.

How did your passion for cooking come about?

I remember when I was a child if my father wanted to reward me he would take me to a restaurant to eat. I watched with curiosity and fascination the cooks working in front of the stove; Thus was born my passion and since then the curiosity for this activity and the great desire to make my guests feel good has never faded.

What did having Gualtiero Marchesi as a teacher mean to you?

Gualtiero Marchesi was a very important point of reference for me, a true master in the most authentic sense of the term. I remember when in the evening, after my service as executive chef, he called me in his studio and we discussed, we exchanged views on everything. Listening to him speak enriched me professionally and humanly. I lived these moments as a gift and absorbed like a sponge.

His generosity towards me stimulated me to work even better. Let’s not forget that when I started working for him in the 1990s, Marchesi was undoubtedly the most highly rated chef in Italy: the only one to have obtained 3 Michelin stars.

Working with him was a great stimulus for me and the constant comparison has always given me a great push to improve.

When did you realize it was time to take flight?

The opportunity was offered to me in 2004 when I became managing director of Trussardi alla Scala. It is here in 2008 that I earn my first Michelin star, confirmed in 2009.

The Michelin star, a point of arrival or perhaps a starting point?

In my work there are no arrival points but continuous stimuli to improve and give more and more.

The Michelin star meant and still means this to me.

In his Milanese restaurant he worked closely with architects and interior designers to create a place that corresponded 100%. What relationship exists in his opinion between design and cooking?

In my view, design and cooking must go hand in hand. In a kitchen, design is essential, the kitchen must be aesthetically pleasing but also functional. Everything must be put in the right place and each person must find a pleasant place to work in order to give their best. Another fundamental element of the kitchen is the plating. We could call it the aesthetics of the dish, the design in the dishes. I see a close relationship between cuisine and design aimed at giving the guest a complete aesthetic and tasteful experience. In this lies my continuous research.

The kitchen of the Berton restaurant houses an exclusive table for two: the so-called chef’s table. What is it and when did the idea come about?

The chef’s table is the one that best allows you to fully enjoy the gastronomic experience.

We have studied a dedicated menu that I follow directly. The guest has the opportunity to immerse himself completely in the atmosphere of our kitchen, follow the food preparation process and therefore have a privileged point of view. It is an idea that we have had since the opening in December 2013 and which is enjoying great success.

In recent times we have witnessed a growth in attention towards the kitchen, many of his colleagues appear on TV as judges of cooking competitions. How do you judge this phenomenon?

I think these kinds of programs have helped our industry a lot.

These broadcasts also represent for us a continuous stimulus to improve! They certainly help the development of a gastronomic culture and the ever greater valorisation of our sector.

How would you define your cuisine?

Immediate and clear. My flavors are always recognizable on the palate.

In this sense, I also wanted my restaurant, modern and linear, to reflect this essentiality.

If you had to choose from all the variety of dishes on offer the one that best represents you, which one would you choose?

The broth represents the cooking philosophy that I have imagined.

You see, broth is used a lot as an ingredient in cooking, but it’s also very mistreated. In fact, it is almost never considered as a real dish. Instead, I believe that broth represents the essence of cooking, the very completeness of the dish.

What are the projects in the pipeline for 2023?

Two in particular: the first concerns the opening of a new Super G.

onal hotel, a restaurant and a top spot for events. A small world above the rest of the world devoted to well-being and obsessive care for every moment of the day.

After the one in Courmayeur, active since 2009, we will also open a Super G in Madonna di Campiglio.

The other is a Milanese project that is very close to my heart, but of which I can still reveal little. I can only tell you that it will be located near Piazza della Scala, a place I am very attached to professionally and which will see the light of day next summer.

In addition to the many achieved, is there still a dream in Andrea Berton’s drawer?

I dream of being able to open 10 more restaurants!

I love to diversify and to challenge myself with always new things makes me feel good.

This is my life!