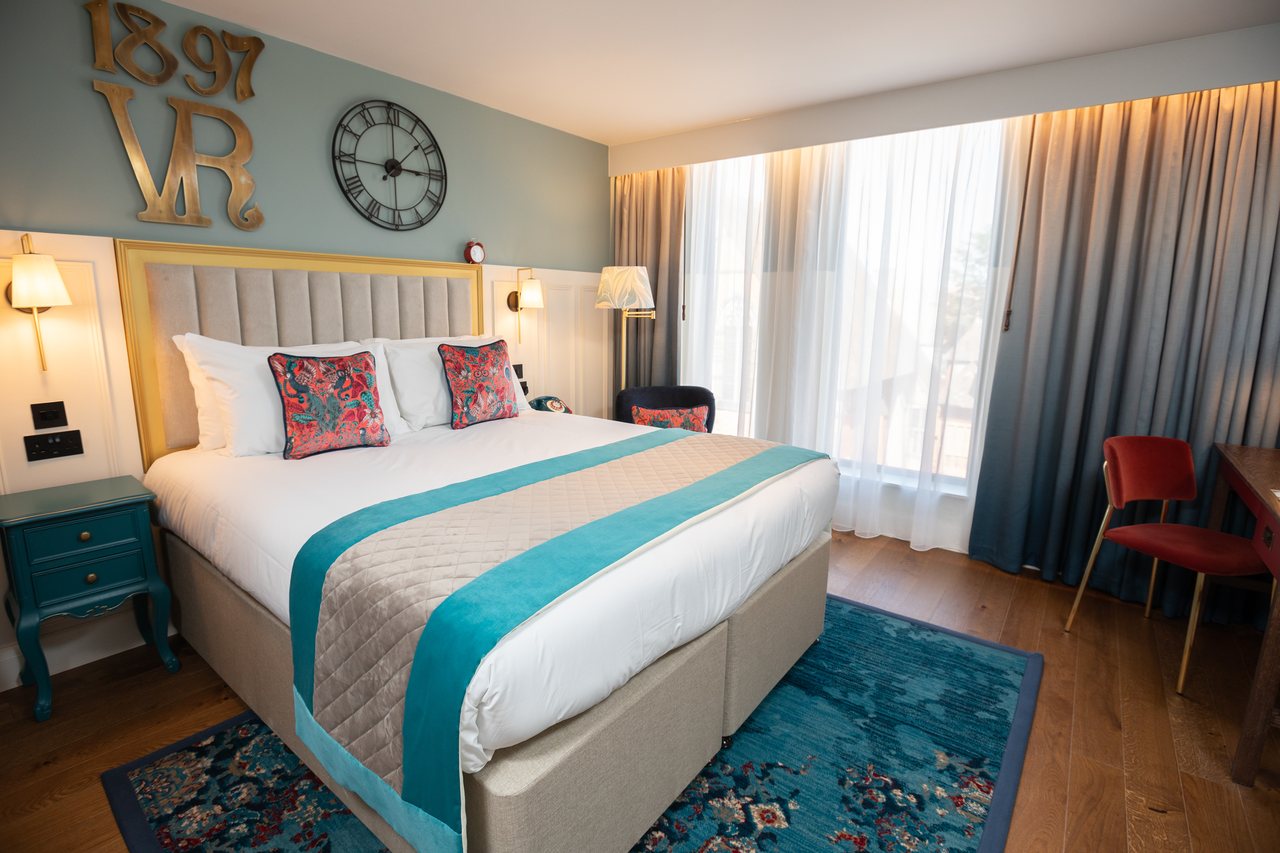 Hotel Indigo is an attractive and contemporary boutique hotel located in the heart of Chester’s beautiful and historic city. Newly built in 2019, it has opened its doors to reveal a decor that reflects this Roman city’s architecture and its famous racecourse worth celebrating if just to acknowledge that Chester Racecourse is the oldest racecourse in the UK heraldeding its first race in 1539.

There are artworks of horses and rosettes and other equine-themed decorations around the place. 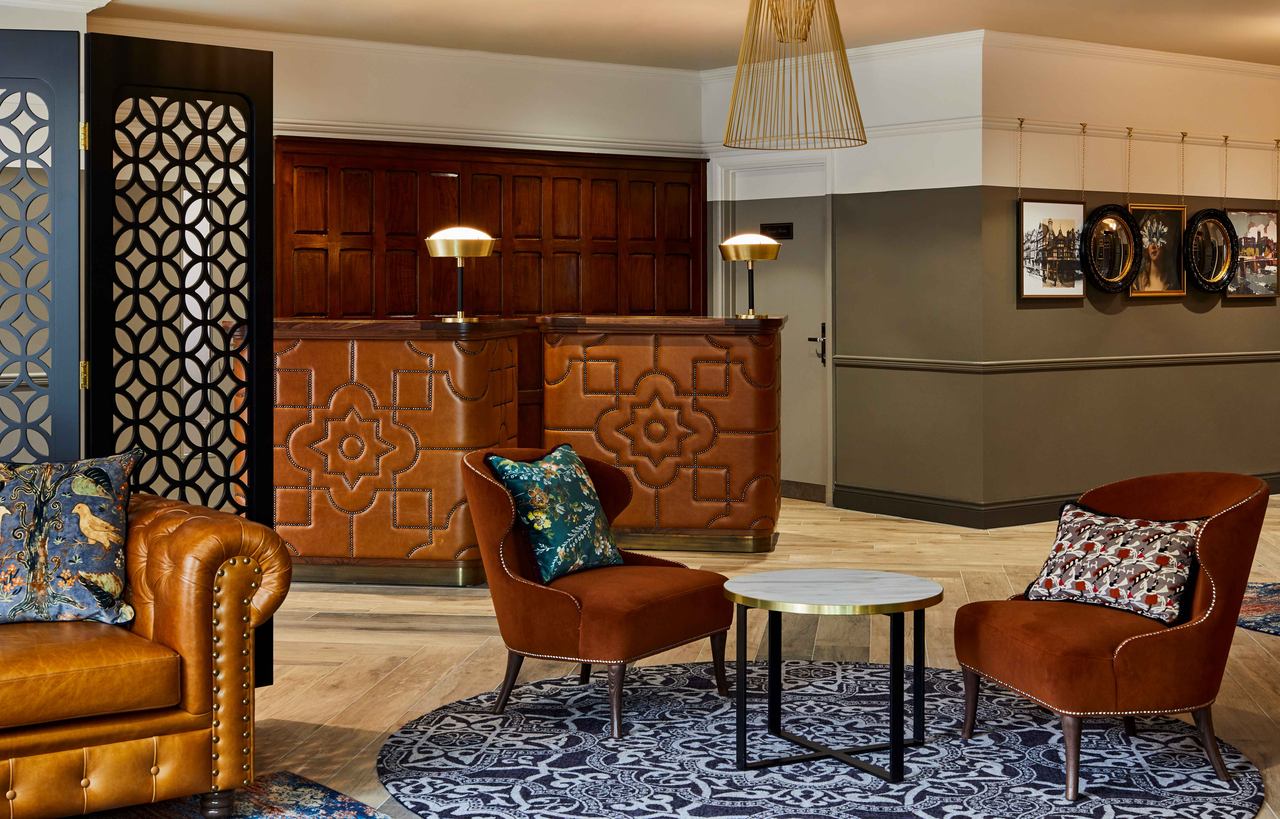 Hotel Indigo is just a short walk from its shopping district and the 2,000-year-old city walls – the most complete circuit of Roman and medieval city walls in the UK.

Service is excellent and the staff are very friendly and attentive.

Hotel Indigo is perfect for staycationers who value convenience and easy access to most of what the city offers. With its beautiful romantic suites and top-notch restaurant, it’s probably most suited to couples and foodies. 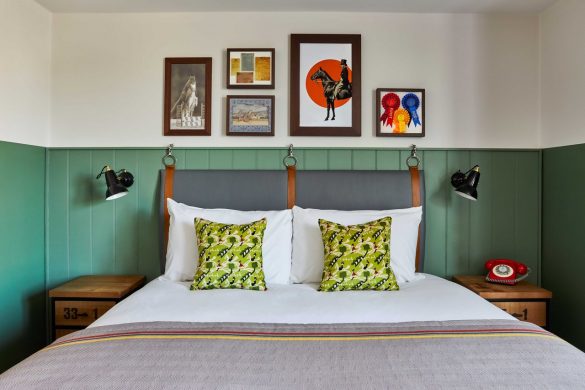 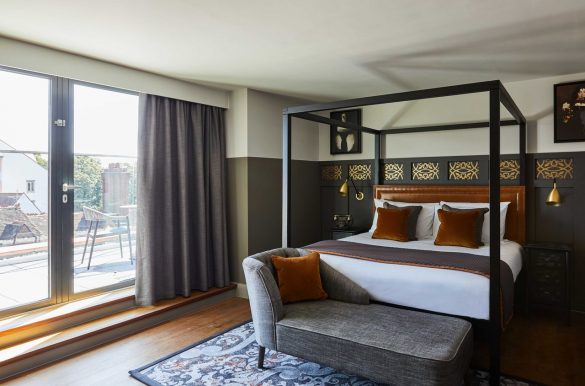 The 75 themed guest rooms comprise Standard, Deluxe, Premium and King  are all air-conditioned and equipped with a 40-inch TV that you can control from your mobile, air conditioning, tea and coffee-making facilities and comfy Hypnos beds.

There is 24-hour room service and high-speed Wi-Fi throughout.

The Forge restaurant is the jewel in the hotel’s crown. Chef and restaurateur Mike Robinson opened his new 70-seater restaurant, cocktail bar and private dining room last year, and has established a strong reputation among the city’s foodies for excellent casual dining based on local, ethical and sustainable ingredients and practices. The open kitchen cooks over wood and charcoal, using amazing wild and locally reared meat, that is all aged on the premises.

Despite starving myself most of the day in anticipation of the feast ahead, I did shy away from the contents of the impressive meat fridge on display in the dining area. (The dry-aged steaks are served in portions ranging between 650-250g.) It was worth the sacrifice to allow room for my mouth-watering Slow Cooked Pork Belly followed by Amaretto Pannacotta.

You must book ahead as The Forge is regularly fully booked and does seem to be a mecca for those locals in the know. Dining at The Forge is a fantastic experience and a highlight of our stay.

Room rates start from £119 per night.

Chester’s 11th-century cathedral is a tourist staple and a great way to do a quick circuit of some of the main sights.

Further along, the walls overlook Chester Racecourse, aka The Roodee, the oldest working racecourse in Britain set in the former Roman harbour. They say this is where the term ‘gee-gees’ was first coined, after Sir Henry Gee, who first allowed racing to take place here in the 16th Century.

It’s a shoppers’ paradise with The Rows, the city’s unique medieval network of open galleries at the first-floor level that line the main streets in the centre. Or check out, as we did, McArthurGlen Cheshire Oaks Designer Outlet just outside the city, near Ellesmere Port. The UK’s first designer outlet opened in 1995 and remains its largest.

Other highlights include The Grosvenor Museum with its fascinating collection of Roman gravestones and stories of gladiators in pictures and words; Chester Zoo – one of the top most-visited paid attractions in the UK; Grosvenor Park and its open-air theatre; Chester Basin or take a stroll along The River Dee.

Hotel Indigo l is located in the city centre and has good transport links, including a direct train to London in under two hours and within easy reach of Manchester and Liverpool airports and just off the M53 motorway.

Heads Up: there’s no parking on site, and finding a home for your car can be tricky. The hotel provides a discount from £20 for 24 hours down to £12 at Pepper Street Car Park.

Verdict: Hotel Indigo offers the best of both worlds with its modern look and retro vibe. Chic, smart, whilst cosy and comfortable and in-keeping with horse racing and equestrian art on the walls and a decorative eye for detail and a welcoming aroma in the lobby to boot.