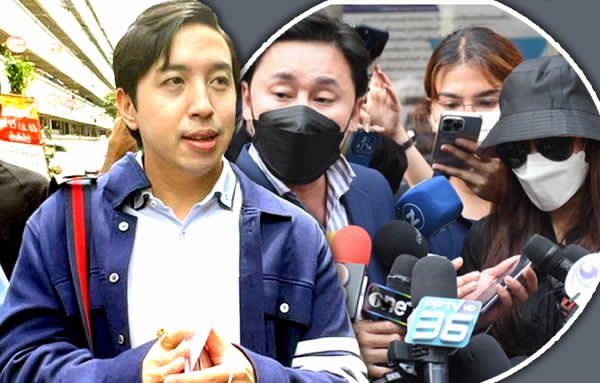 Sister of the actress claims that she was offered money by the accused as she filed further police complaints for defamation and giving false evidence to police concerning a criminal allegation against the defendant claiming blackmail. Her lawyer insisted to the Criminal Court that the defendant was likely to tamper with evidence if granted temporary release or bail.

The grandson of a former cabinet minister found himself behind bars on Tuesday after intense questioning on Monday by police at Chokchai Police Station in Bangkok over drug rape allegations made by a 21-year-old actress against him and after the Criminal Court heard claims that he may have interfered with evidence by lawyers for the victim who later filed further serious charges against him for making a false criminal allegation against the victim, defamation and forgery.

A young businessman and grandson of a former minister in the Thai government decades ago was denied bail by the Criminal Court sitting at Ratchadaphisek Road on Tuesday after he had presented himself to Chokchai Police Station in the Lat Phrao area of Bangkok on Monday to answer date rape allegations made against him by a 21-year-old actress whose name is being withheld from the media.

The accused in the case is Mr Apidis Inthulak who is reported to be the owner of a substantial commercial enterprise in Bangkok.

Incident occurred on August 9th last in the Nak Niwat area of Bangkok, actress claims she was drug raped

It is understood that the allegations centre on an incident which occurred at a pool villa situated in the fashionable Nak Niwat area of the Lat Phrao suburb of Bangkok on August 9th last during which the victim claims she was raped and sexually assaulted by the accused after being administered sleeping pills possibly contained in an alcoholic beverage.

The woman is being represented by one of Thailand’s most well-known lawyers Mr Sittra Biabungkerd or ‘Lawyer Tum’ who represents a new breed of legal activist or campaigning lawyer in Thailand.

Mr Sittra played a key role last year in exposing police corruption and the horrific murder of 24-year-old drug dealer Jeerapong Thanapat in Nakhon Sawan at the hands of Police Colonel Thitisan Utthanaphon or ‘Ferrari Joe’, the police commander in the centre of Nakhon Sawan up to August 2021 last.

The senior officer was, this year, along with his subordinates involved in the incident, handed down a death sentence by the Criminal Court after public outrage and revulsion when a shocking video of the victim being suffocated by the policeman with plastic bags while under interrogation, in early August last year, was made public through the media.

On Monday, after the suspect in the case, Mr Apidis confidently presented himself at Chokchai Police Station, it is reported that he denied the allegations before him robustly and strenuously during more than 9 hours of interrogation.

He also gave media interviews in which he rejected any wrongdoing and according to the legal team representing the actress pressing charges, suggested that the charges were trumped up and an attempt to blackmail him.

In court, on Tuesday, police at Chokchai Police Station led by Police Colonel Pornthawee Somwong, the Director of the station, pressed rape charges against the accused and also applied for an order detaining him until September 12th next as the investigation into the charges against him moves forward.

This was followed by an application by the accused for bail on the basis of a cash surety of ฿200,000.

However, the legal team for the victim, having previously expressed dissatisfaction about previous representations of a police officer initially handling the case, objected because of claims the accused had tampered with phone chat messages which are essential to the prosecution of the case.

The police officer was named as Police Lieutenant Colonel Apirak Boonnak, the Deputy Head of Investigation at Chokchai Police Station who was the subject of a complaint by the actress for failing to present sufficient evidence in the matter and therefore running the risk of the case being dismissed.

The court was also told that the accused had refused to let the investigating officer at Chokchai Police Station access his smartphone as part of the investigation.

Lawyers for the actress told the court that the accused was likely to interfere with evidence if granted temporary release.

The court refused the bail request although a second application is considered likely on new grounds and with stricter conditions.

After the hearing, the victim in the case said she was reassured as she feared that the accused may also pose a danger to witnesses.

Further volley of charges lodged in court on Tuesday against Mr Apidis including making a false criminal allegation, evidence tampering and defamation

Her legal team also again attended Chokchai Police Station and presented a range of new charges and complaints against the defendant including presenting false evidence of a criminal offence under Section 179 of the Criminal Code by suggesting that the actress had tried to blackmail the accused, a charge of destroying or interfering with evidence under Section 188 and another charge of forgery under Section 264 as well as a charge of defaming the victim in the case.

They also called for the accused to be prosecuted under the Computer Crime Act for illicit interference with a computer system.

Speaking with reporters, an older sister of the victim told them that the only party that had raised money in this process had been the accused but her sister refused to accept it and was looking instead for justice.

The victim told reporters that her behaviour on August 9th was not, in any way, sexually suggestive nor did she take sleeping pills. She admitted that he had consumed alcohol but in a moderate quantity and revealed that she had been the subject of medical examinations and tests to substantiate her claims.

The actress accused Mr Apidis of threatening to discredit her in various video clips which were presented to the police.

Police investigate the rape of a party hostess in Chonburi, three men accused have been arrested

Police in Bangkok and Pattaya hunt down sexual monster who terrorised, raped scores of women with impunity

Frenchman’s car stopped in Phuket, charged with the violent hotel rape of a 29 year old UK woman in Patpong