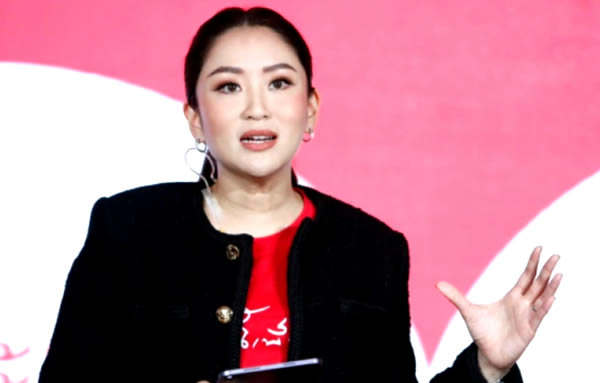 Policy platform presentation on Sunday and the latest opinion poll in the northeast comes as the nation is still preoccupied with the tragic aftermath of the mass murder in Nong Bua Lamphu. During proceedings, on Sunday, Pheu Thai Party leader Dr Cholnan Srikaew also promised that, if elected, the party would bring back its controversial war on drugs which he said would be recalibrated for modern times. It comes as drug policy and the threat posed by drugs, already a growing issue before the atrocity in the Na Klang District of Nong Bua Lamphu last Thursday, has been jettisoned front and centre in the runup to the next General Election.

Pheu Thai on Sunday in Bangkok outlined its new policy platform which forms the basis on which it will fight the next General Election with a plan to prioritise development around four Thai urban centres and provide tax-funded income support to the lower-paid to boost employment and upskill the Thai workforce. The party’s potential nominee for Prime Minister, who in an opinion poll in northeastern Thailand, with results released on Sunday, leads as the public’s favourite with 36.45% support. Paetongtarn Shinawatra told an audience on the same day that the party planned to not only provide for a better future with higher incomes but also planned a ‘new society’ where every person had security which would be underpinned by a stronger rule of law.

The Pheu Thai Party, on Sunday, introduced an outline of its policies and platform for fighting the next General Election with a focus on raising the incomes of working people and addressing the country’s economic malaise which it links with the need for a stronger rule of law in Thailand and a more representative constitution.

During a slick media presentation on the first floor at party headquarters in Bangkok, where the participants included Paetongtarn Shinawatra, the daughter of former premier Thaksin Shinawatra, Dr Cholnan Srikaew, the party leader and deputy party leader Sutin Klangsaeng, all wearing T-Shirts with jackets, the basis for the new party programme and platform was outlined.

The platform was pitched to the audience as the key to ushering in the end of the era of General Prayut and the return of the Pheu Thai Party to government with a landslide.

Thailand will face an election early next year or, at the latest, on May 7th 2023 even if the House of Representatives serves its full term.

Dr Cholnan said that the achievement of a Pheu Thai Party landslide in the next General Election was the key for Thai people to embrace a new and better life.

He talked about three key pillars of the party’s plan starting with political representatives that understand the needs of the people on the ground, policies that address the country’s problems and the real world and thirdly, the election of a prime minister who has the potential and dynamism to give the people hope and lead the kingdom out of the current crisis.

He referred to the party’s new economic policy platform which is focused on generating a new future for Thailand’s economy by creating new income sources for the public and raising living standards.

The presentation heard Dr Phrommin Lertsuridet, the Chairman of the Pheu Thai Party policy-generating committee, describe Thailand’s current state as that of crisis. He said that people living in the country were trying to cope with low incomes and high debt which has destroyed their purchasing power.

This, he explained, meant that shops can’t sell while factories can’t produce which, in turn, means the government does not collect enough taxes.

Dr Phrommin said while this was happening, the government of General Prayut Chan ocha was busy resolving the country’s debt problem while creating even more debt.

Plans to boost income per rai of land from ฿10,000 per annum to ฿30,000 through scientific knowledge, cost-cutting technology and government supports

The answer being pushed by the Pheu Thai Party is to develop policies to help Thai people find new income sources in a revamped and revitalised economy.

The presentation went on to outline how the Pheu Thai Party proposes to use ‘Agricultural surgery’ to introduce scientific cost-cutting technology and more learning into Thai agriculture which would raise the income per rai from ฿10,000 per annum now to ฿30,000 in the future.

The sector would be encouraged by the government to grow crops to replace imports while also expanding exports.

The party’s plans also include an improved debt relief policy for farmers.

At the same time, Pheu Thai would also address and provide for new generations of farmers who wished to pursue more sustainable farming and a new lifestyle with government support.

This will be accompanied by a programme to review all existing business laws especially focusing on permits required as well as efforts to streamline and make easier current regulation of employment, imports and exports as well as international transactions.

This will be accompanied by tax reform plans focused on profit tax, income tax, land and building taxes as well as import taxes.

The party will also prioritise initiatives using technology to improve education opportunities, the country’s manufacturing sector and its banking system.

Deputy Party leader Sutin Klangsaeng detailed plans by the party to address income equality and suggested that the Pheu Thai Party will put a scheme in place where tax funds would be used to assist the less well-off who would not be taxed but would instead receive income support allowing them to live and earn until their earnings were strong enough to be able themselves to pay tax into the system.

This financial aid would be targeted at those most in need in the kingdom and would help to encourage people to become part of the working economy while also affording them opportunities to develop themselves and pick up work skills.

The party’s plans also envisage a radical programme to retrain and reeducate workers while linking them, through big data platforms, with potential employers so that the kingdom can upskill and put to work its valuable human resources.

The presentation also heard from the Chairman of the party’s key ‘One Family’ working group, Paetongtarn Shinawatra, the daughter of former Prime Minister Thaksin Shinawatra.

The 35-year-old strongly tipped to be prime minister if the Pheu Thai Party wins the next election, talked about changing Thai laws that blocked opportunity while also outlining plans for community-level incubators for businesses and enterprises, the development of e-sports including a free-to-air broadcasting rights network and the expansion of Thailand’s soft power abroad.

Ms Paetongtarn talked about four steps to the Pheu Thai Party’s new programme starting with establishing the ‘new potential’ for the kingdom, the second step was to find ‘new income’ with the third being the creation of a new society in Thailand where everyone had basic security.

The fourth step she outlined was a new approach to politics underpinned by a stronger rule of law.

‘Prayut’s time is up’ she told the audience as an authoritative poll in Northeastern Thailand emphasised Ms Paetongtarn’s support at 36.45%

‘Prayut’s time is up. Now is the time to countdown to the strength of the people and bring about economic stability under the leadership of a Pheu Thai government for new potential, new income for a new society, for new politics, these are the four steps to a landslide. For a new tomorrow in Thailand, for the new life of the people,’ she said.

The unveiling of the new Pheu Thai Party platform came as the results of a new poll conducted by the National Institute of Development Administration (NIDA) in northeastern Thailand provided good news for the country’s largest political party and Ms Paetongtarn.

In the poll, she led the field with 36.45% support followed by Move Forward Party leader Mr Pita Limjaroenrat at 12.65% with Khunying Sudarat Keyuraphan, a former minister and close ally as well as a former Pheu Thai Party strategist who now leads the Thai Sang Thai Party, in third place with 10.2%.

General Prayut was relegated to fourth place in this regional poll with only 9.85% support.

The poll also showed the Pheu Thai Party with a commanding 54.35% among prospective voters.

Pheu Thai Party’s war on drugs to be modernised, reintroduced to address Thailand’s drug use epidemic

On Sunday also, Dr Cholnan Srikaew promised to renew the party’s war on drugs policy but under new terms in response to public outrage over the mass murder in Nong Bua Lamphu by a sacked police officer with a drug problem.

Dr Cholnan said that while large consignments of drugs were being seized by the Royal Thai Police and the security forces, there was not enough emphasis on the prevention of drug use in society and the rehabilitation of drug addicts.

He said the Nong Bua Lamphu incident also demands a reappraisal of gun ownership laws and mental health issues linked to corrupt officials who are removed from the civil service or employees removed from any position.

It has long been acknowledged even before last Thursday’s outrage that Thailand has chronic problems with illegal drug use which permeate its society to an unusually high extent.