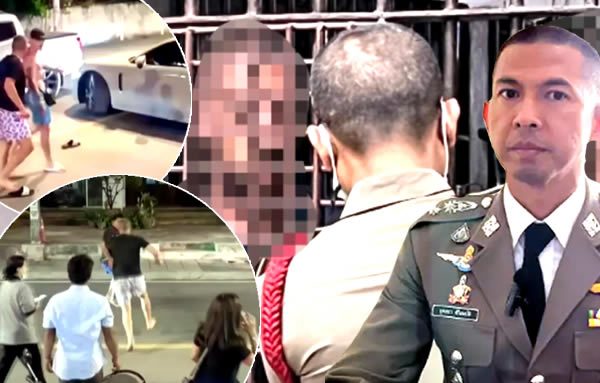 It is not clear how this case will proceed as the victim is not yet out of danger and still unconscious while the two French nationals appear to be negotiating with the man’s wife through the police in Bophut to reach a resolution to prevent very serious charges being prosecuted against them before Ko Samui Provincial Court. This appears to be a case of road rage with the gratuitous violence of the French men shocking local people.

Two French men are still in custody in Ko Samui while the victim of a vicious assault at their hands is still unconscious in a hospital ICU ward and not yet out of danger, according to doctors, after receiving brain surgery. The Thai man was punched in the head on Saturday night after being pulled over on his motorbike while bringing his wife home from work on the holiday island. The French men, driving a luxury Porsche car, flagged down the motorbike ridden by the victim and his wife after it appeared to have overtaken the French vehicle at an intersection.

Police on Ko Samui have objected to bail for two French tourists who are facing charges of causing bodily harm and mayhem on the holiday island following a vicious attack on a Thai man on Saturday night last which appears to have been an act of road rage.

The assault was carried out by one of the men who punched 43-year-old Somkhuan Songkot leaving him unconscious after his head hit the pavement on the road.

After this, the Thai man was taken by ambulance to the hospital where doctors diagnosed a haemorrhage leaving him with a clot on the brain.

Doctors immediately ordered surgery to drain the excess blood and it is reported that he is not yet out of danger and is being treated in the hospital’s ICU ward.

Mr Somkhuan is still reported to be unconscious at this time

Police on Ko Samui led by Police Colonel Yuttana Sirisombat arrested the two French suspects named as 43-year-old Vincent Raymond Bugeya and 28-year-old Julien Gerard Rene Vincent at the scene as witnesses came forward concerning the incident with at least one having a video clip of the shocking attack on the man.

It is understood that, on Saturday night, at approximately 9 pm, 43-year-old Mr Somkhuan was bringing his 47-year-old wife, Ms Lakhana Songlao, home from work on his motorbike in the Bophut area of Ko Samui.

At the Phru Chaweng Intersection, they overtook a luxury grey Porsche Panamera car. The Porsche was driven by 28-year-old Mr Julien Vincent.

The car then caught up with the motorbike and appeared to signal for the two riders to pull over.

On Monday, Ms Lakhana recalled what happened next.

She and her husband assumed the occupants of the car were looking for directions. However, suddenly the men emerged from it shouting and behaving aggressively.

Mr Somkhuan retreated from his attacker who pursued and punched him in the head, collapsing him

The Thai man, wearing a black T-Shirt and blue shorts, attempted to flee into a local shop on the roadside, the Wassana shabu shop.

However, he chased down and Mr Somkhuan received a critical blow at this point leading him to fall to the ground, hitting his head on the pavement.

Police Colonel Yuttana, over the weekend, appointed Police Colonel Sirachach Kamunee, the deputy head of investigation at Bophut Police Station to lead the investigation which is focusing on the state of mind and accounting in detail for the actions of the French attackers on Saturday including whether or not they had taken drugs.

Police also have an abundance of evidence related to the assault which took place in front of startled onlookers on the public street with video footage clearly showing the two French men dressed in shorts, T-shirts and wearing flip flops at the scene with Mr Raymond attacking, the instigator of the violence toward the Thai man, pursuing him while some onlookers phoned for the police.

The pair are facing serious charges over the incident and have been formally arraigned before Koh Samui Provincial Court but the investigating officers are also acting as a mediator between the parties under Thai law.

On Monday, Police Colonel Sirachach appeared to indicate that talks are underway but that he had a duty to be fair to all parties while also collecting further evidence concerning criminal legal proceedings against the two French nationals who are still in custody.

On Monday, the wife of the victim, Ms Lakhana, travelled from the hospital in Ko Samui to the court to object, along with police, to bail being granted to the two Frenchmen who, over the weekend, were held in the local police station cells but who may be moved to Koh Samui Prison if criminal proceedings on the matter proceed further and formal criminal charges are pursued in court.

Policehave revealed that the two men travelled from Hua Hin to holiday in Ko Samui in recent days before last Saturday’s fracas and assault.