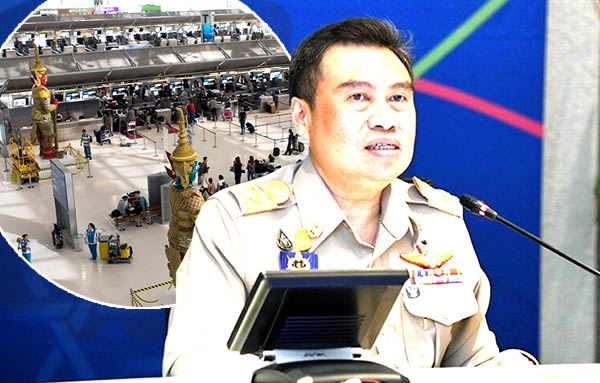 The Economic Intelligence Centre (EIC), the research arm of Siam Commercial Bank has forecast growth of 3.4% in 2023 compared to similar projections for 2022. This is dependent on the kingdom receiving 28 million visitors next year, 4 million of whom are expected to come from China, a country whose economy is currently in a state of crisis and where street protests have broken out this week across the mainland.

Thailand’s economy is still facing a growing list of challenges as the year 2023 comes into sight. In the past week, as well as what health officials have termed as a smaller wave of the COVID-19 virus, the country’s exports for October are reported to be down by 4.4% from last year while incoming tourists, although rising to 1.48 million for the month, are now predominantly originating in Asia and spending less. With 2023 predicted to be a year of falling GDP in many countries including Europe and China, the kingdom is very much dependent on its critical foreign tourism industry to boost its economic performance and drive another year of similar growth to his year.

Thailand has seen a rise in infection levels and deaths associated with the COVID-19 virus in the last month which is particularly emphasised in areas where foreign tourism is currently recovering.

This includes Bangkok, the eastern provinces including Chonburi and Rayong which include the seaside resort of Pattaya and southern regions including Phuket and Surat Thani which includes the island of Ko Samui.

There has also been a rise in the northeastern provinces which are also popular with foreign tourists and travellers.

The figures came in a weekly update to November 26th presented by Dr Opas Karnkawinpong the Director-general of the Department of Disease Control at the Ministry of Public Health.

He indicated that the latest figures show over 700 people being hospitalised each day with an average of 10 deaths per day mainly among the elderly and those with underlying conditions.

Officials have described the latest trend as a small wave that had been expected due to the hike in social activities and the colder weather in Thailand towards the end of the year.

Thailand’s foreign tourism industry is currently in recovery mode with 1.48 million foreign tourists confirmed to have arrived in the kingdom in October and more visitors expected from now on in what is the peak season for the industry which will last until March 2023.

However, currently, the vast majority of arrivals to the kingdom are from Asia with travellers generally coming on shorter trips and spending less.

The countries making up the numbers are India, Malaysia, Laos, South Korea and Vietnam although an improvement in air flight connectivity moving into the western holiday period for Christmas and the New Year may lead to larger numbers of long-haul visitors from countries such as the United States, the United Kingdom and Europe.

The kingdom is expected to welcome 10 million foreign tourists this year with the Economic Intelligence Centre (EIC) in recent days, projecting 28 million visitors for 2023.

In response to the rising number of cases linked with the virus, authorities in the kingdom are urging vulnerable people such as the aged and those with chronic illnesses to avail of a fourth vaccine.

They are also reaching out to families with older members and urging them to take their relatives to hospital for treatment early if any condition appears to manifest itself.

Officials point out that they are well-prepared to provide the necessary treatment.

On Monday, Deputy Chief Executive Officer of the Economic Intelligence Centre, the Siam Commercial Bank economic research unit, Dr Somprawin Manprasert, forecast that next year, Thailand will be even more dependent on foreign tourism than this year as it faces a slew of problems because of both internal factors and a global economic downturn, to which, only a near full return of the foreign tourism industry is the ultimate answer.

The unit is only predicting 3.4% growth for 2023 as external market conditions throughout the world are deteriorating, a situation that is already impacting Thailand’s exports, the key engine of growth in 2022.

Of particular concern to economic forecasters is a deterioration of the economic performance in both China and the European Union.

The unit is projecting that the kingdom will receive 28.3 million visitors in 2023 but this includes a projection of 4 million visitors from China and an assumption that over the next 12 months, the Communist country will open up.

Despite the extraordinary events in China over the past 48 hours with overt protests against the Communist Party over pandemic restrictions in key cities including Beijing and Shanghai, the economic research agency considers that it has seen some positive indications from China with more commercial flights carrying Chinese students and businessmen arriving on pre-approved visas and journeys.

The current protests in China have seen muted coverage by Thai media who instead, in the course of the outbreaks across the Communist country, the most significant since the mid-1990s, with some on the street calling for the overthrow of President Xi Jinping and the Communist Party, have been reporting the new virus wave.

The protests are in direct response to pandemic lockdown measures which have cratered the Chinese economy this year and raised many disturbing questions among economic and financial observers.

Projection of 3.4% growth assumes that oil prices next year will not spike due to geopolitical shocks

The Economic Intelligence Centre is also assuming that a world economic downturn will signal that oil prices will not return to the stratospheric prices seen in the middle of 2022 but also notes that Thailand’s oil fund has a debt of ฿1.3 billion to be resolved by the government.

The oil fund has played a key role this year in keeping fuel costs in the kingdom stable and it is assumed that it will be maintained by the government provided there is no as yet unforeseen reason for oil prices to spike.

The agency also predicts three further interest rate rises from the Monetary Policy Committee of the Bank of Thailand in 2023 bringing interest rates to 2% from a projected end-of-year starting point of 1.25% with one further rate rise of 25 basis points by the end of this year.

It particularly notes a continued elevation in headline inflation going into 2023 tapering off from the middle of the year.

2023 will see a General Election which could also lead to political uncertainty which, in Thailand, can quickly undermine economic confidence.

The country’s relatively modest but rising interest rates and already high level of private debt combined with the prospect of reduced exports underline the importance of foreign tourism in 2023 to the country’s economic performance.

The Economic Intelligence Centre (EIC) expressed concern that many medium and smaller business enterprises linked with foreign tourism have not yet reopened because of the high costs required to do so and because of losses sustained during the country’s lingering shutdown of the industry because of the pandemic.

‘Tourism will be an important factor in building the growth of the Thai economy in 2023, which expects that the number of tourists will reach 28.3 million, so we must prepare to receive tourists, especially in small and medium-sized enterprises,’ Dr Somparwain explained.

This situation was confirmed in a briefing to the media on Monday from Mr Pornchai Thiravech, Director of the Fiscal Policy Office at the Ministry of Finance who, first of all, highlighted that both private consumption and investment remained robust and unimpaired during October.

Thailand posted a trade deficit of $596.4 million in October.

This was attributed to a fall in GDP across the world and rising inflation negatively impacting the spending power of consumers in export markets driven by tightening monetary policy which is raising the cost of loans and particularly mortgages on homes.

Thailand’s exports consequently decreased although there were some bright spots with gains in output to the United Kingdom, Australia and Switzerland where exports rose by 103.5%.

The farming sector and agriculture saw a sharp rise in output, up by 6% with a particularly strong rise in livestock output and the fruit industry.

The industry’s index also rose for five months in a row from 91.8 to 93.1 in October from September.

Officials at the ministry also underlined that Thailand’s economic stability remained sound with foreign exchange reserves at the end of October coming in at $201.9 billion and public debt at 60.4% of GDP.

The headline inflation rate was elevated at 5.98% with core inflation, expected to peak at the end of 2022 as inflation tapers off later in 2023, at 3.17% for October.