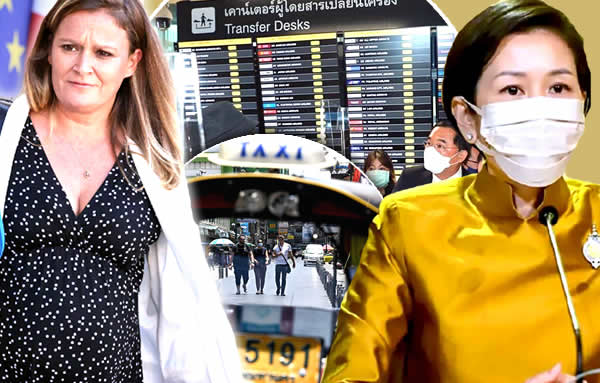 Figures this week from Paris show a French foreign tourist industry achieving revenues nationally at 22% ahead of figures for 2019 while Thailand will be aiming to achieve, at best, only 33% of the numbers seen three years ago or a 67% loss. This news must be disturbing for the sector in Thailand and raises questions about the permanent damage inflicted on the Thai industry since 2020.

Thailand’s foreign tourism sector appears to have suffered permanent damage due to the country’s emergency since 2020 with projected visitor numbers and a foreign tourism revenue stream this year which will be between 65% and 75% lower than that seen in 2019. The situation is in marked contrast to France which recorded bumper visitor numbers in July and August with expenditure in hotels up 22% on 2019 figures.

On Tuesday, executives at the Tourism Authority of Thailand (TAT) talked up the possibility of targeting wealthy Indian families to come to Thailand to celebrate wedding events as the kingdom approaches the high season for the foreign tourism sector which begins in October.

However, despite the return of foreign tourists in numbers, there are disturbing signs that the country’s foreign tourism industry, once considered the jewel in the country’s economic crown and which has proven to be a key cash distributor to Thailand’s ‘grassroots’ economy, has suffered structural and perhaps permanent damage.

At the start of the week, deputy government spokesperson Rachada Dhnadirek talked up the importance of the foreign tourism industry to the economy and predicted that Thailand would welcome 7.5 million visitors in the second half of the year as it targets 10 million visitors this year or roughly 25% of the level seen in 2019.

At the same time, in Paris, French Tourism Minister Olivia Gregoire was hosting a press conference as she revealed ‘exceptional’ results for the French industry which is already surpassing 2019 records when 90 million people visited the European country, making it the most popular destination in the world.

‘We want to remain the number one destination in the world,’ a visibly excited Ms Gregiore pronounced as she went through the data showing that, over the summer, credit card spending in French restaurants and hotels was 10% over that seen in 2019 with arrivals in the summer months already reaching the record set in 2019.

The data presented by the French minister included a key metric, that of revenue per available room (RevPAR) showing that national income was up by 22% over that seen in 2019.

The figures were even more spectacular for Paris and the French Riviera as the comparably weaker euro has led to an influx of higher spending holidaymakers from the United States and countries in the Gulf.

‘We had plans to go as a family, here in Paris, as well as to other parts of Western Europe two years ago, and we had to cancel those for summer 2020. So, long deferred trip,’ 38-year-old American tourist Graham Klym from Seattle in Washington State told the press agency Reuters.

In the meantime, as Thai planners analyse the data on Indian weddings and talk of a revival of foreign tourism spending levels, the actual data for the sector is less than impressive.

Last week, the government’s topline figures suggested that holidaymakers this year to the kingdom are spending just over ฿35,000 per visitor compared to over ฿50,000 in 2019.

The latest figures from the Tourism Authority of Thailand (TAT) show that from January to August 28th 2022, Thailand received 4.2 million visitors who are reported to have spent ฿186 billion.

Foreign tourist spend per visitor down in 2022 compared to 2019 by at least 11.5% according to latest TAT figures, even higher according to other sources

Even the targets for the year are off with between ฿600 billion and ฿700 billion being targeted, roughly a third or 33% of the level seen in 2019.

For this to be achieved, however, expenditure per tourist, taking a median of ฿650 billion, would need to come in at ฿65,000 per visitor.

That is a 46.77% increase in spending per visitor compared to what we have seen over the first eight months of 2022.

While outlining his plans to target Indian wedding guests this year from within and without India across the Indian diaspora, Deputy Governor of the Tourism Authority of Thailand (TAT) Siripakorn Cheawsamoot told Reuters that Thailand was targeting $11 billion or roughly ฿400 billion in the second half of the year and an average spend of ฿48,000 per tourist for the whole year which would see roughly 25% of the ฿2 trillion which the foreign tourist industry generated for the country in 2019.

Part of Thailand’s problem remains the fact that the Chinese market has not reopened despite plans to increase flight frequency from 3 flights to 15 per week between China and Thailand being in the pipeline.

A sprawling and deepening economic crisis in Thailand’s northern neighbour where a virus emergency is still closing down large population centres means that any full return of the market that accounted for over 28% of Thailand’s foreign tourists in 2019, is remote.

There is also increased concern about the impact of rising inflation and a cost of living crisis in key western markets being targeted by Thailand such as the United Kingdom and the United States.

Another key issue is limited flight connectivity and a reluctance by international airlines to prioritise flights to Bangkok at this time as leading airlines are focusing scarce resources on a higher return meaning an emphasis on business class passengers.

The message for Thai planners who are already projecting a return to visitor numbers of over 20 million in 2023 or 50% of what was achieved in 2019, is stark.

Nothing, at this stage, can be taken for granted and it will be a long time before the kingdom can put together the revenue-generating tourism industry which directly powered 12% of GDP, over 20% of jobs and indirectly accounts for up 25% of the economy, is back to 2019 levels due to the massive disruption caused by the pandemic both within and outside the country.

The situation highlights the difference between the French foreign tourism industry and that of Thailand.

The situation in France also makes it clear that there is a need for the kingdom to examine what has gone wrong for Thailand despite Bangkok, in 2019, being voted the most visited city in the world.

With Omicron hovering, firms already suffering a cash flow crunch with the economy again in peril