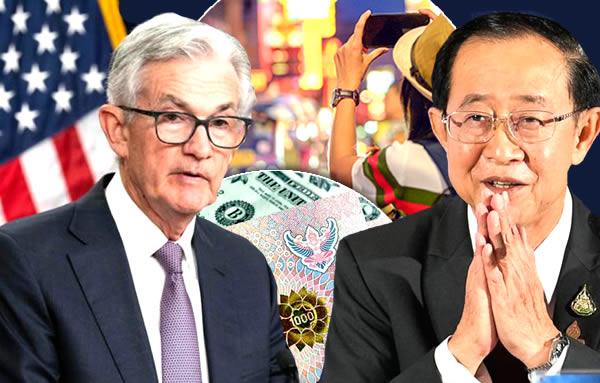 KKP Research, the research arm of Kiatnakin Phatra Bank in Bangkok is predicting the Thai economy to enter recession in the opening quarter of 2023 with the kingdom facing a challenge to find foreign tourists and generate the same level of exports seen in 2022. This will be coming at a time when inflation is predicted to remain elevated at a significantly higher level than the Bank of Thailand’s target rate of 3% and loan interest rates are rising. The economic malaise facing the world has seen the International Monetary Fund (IMF), in September this year, urging central banks to stress test their banking systems for a possible deterioration in real estate values in the short term.

Thailand faces an economic recession in the middle of 2023 with growth only rebounding in the third quarter of the year to come in at 2.8%, below this year’s GDP growth projections, according to an economic forecast released this week from a research house associated with a leading Thai bank. The news comes as a number of former ministers, in recent months, have urged the government to prepare for challenging times ahead with the International Monetary Fund (IMF), in September, urging all central banks to stress test lending institutions for a possible deterioration in real estate values. Thailand’s exports fell by 4.4% in October while a key foreign tourism industry leader in Phuket is warning that Thailand’s famed resort island is losing ground among high-spending European and Scandinavian regular visitors to Bali in Indonesia with the country this year only expected to achieve just over 25% of the visitor volume seen in 2019 and just over 20% of the revenue generated from foreign tourism despite inflation and a three-year time lag.

The Thai baht hit a six-month high against the dollar on Thursday after comments from the Chairman of the Federal Reserve, Jerome Powell, that interest rate hikes may be tamped down with signs of easing inflation in the United States.

The news sent the US Stock Exchange climbing with news also filtering in that US GDP in the third quarter of 2022 was 2.9%, well ahead of expectations.

The movement on the Thai baht saw it trade in the ฿34.8o to ฿35.10 range breaking through the ฿35 price barrier for the first time and significantly reversing the course of this year’s rapid appreciation of the dollar against the Thai currency which saw it, only at the end of October, trade at ฿38.30 to the dollar.

Ironically, the surge in sentiment towards the baht and its trajectory is coming as Thailand’s economic outlook, over the last few weeks, has begun to darken appreciably with even growth for this year being paired down as well as projections for 2023.

Even as Ms Patricia Mongkhonvanit at the Public Debt Management Office (PDMO) at the Ministry of Finance was highlighting the maintenance of Thailand’s BBB+ rating from the Fitch rating agency because of the country’s robust external financial position, there is a whole range of chickens coming to roost linked with a country’s chronic economic problems such as economic inequality caused by a lack of deep-rooted economic development and high private sector debt.

Thailand’s tax revenue for the third quarter of 2022 reversed course and instead of coming in ahead of expectations, was 5% less than projected.

While the kingdom’s public debt was only 60.4% of GDP at the end of the period, the fall in the tax take raises questions about the wider economy and also the ability of the government to engage in further economic stimulus measures in the year ahead.

There will be one last hurrah of stimulus priming of the economy in the opening months of 2023 but it is coming amid signals from Minister of Finance Arkhom Termpittayapaisith that the government must, next year, tighten the purse strings.

The stimulus initiative itself is been seen as a way of countering planned hikes in electricity charges across Thailand following an 18% hike in the last quarter from ฿4.4 baht a unit to over ฿5.

A drop in exports in October of 4.4% from last year brought an abrupt end to 19 months of continued export growth for the country’s economy.

Exports which account for no less than 64% of the kingdom’s GDP are critical to GDP growth prospects and nearly all commentators now agree that this will be challenged in 2023 even as the government predicts modest growth of 1.1%.

This week, KKP Research, the research arm of Kiatnakin Phatra Bank in Bangkok, reduced the kingdom’s projected growth rate in 2023 to only 2.8%, lower than this year and predicted that exports will decline by 1.1%.

The research house also reduced the number of projected foreign tourists in 2023 to 19.2 million in contrast to the 28.3 million being forecast by Thailand’s central economic planners over the last few weeks.

The final figure for 2022 is expected to be 11 million visitors approximately.

Thailand to find itself in recession next year

Indeed the small bank is predicting that Thailand will find itself in recession in 2023 from the first quarter of the year to the third quarter.

This is based on reduced world demand for exports across the board from a troubled Chinese economy to reduced demand in the United States, Europe, the United Kingdom and Japan.

This week’s higher-than-expected GDP figures in the United States may be a sign that America, Thailand’s largest export market, may perform better than expected in the year ahead, a small light of hope.

One of the key assessments made by KKP Research is that Thailand has benefited from a world stock-up programme in electronic inventories driven by pent-up demand coming after the pandemic.

Now, with stock levels at a high, sluggish demand worldwide will feed into lower export demand from Thai manufacturers.

Surprisingly high economic growth data in the third quarter of 2022 driven by a 15.7% hike in private consumption, not primarily by foreign tourism

It is a similar and perhaps even more serious story with foreign tourism which helped drive GDP growth in Thailand in the third quarter of the year of 4.5%, a figure that surprised many analysts as the main component of the growth was not foreign tourism but a spike in private consumption.

The three-month period saw the number of higher spending western tourists fall off pro rata and the number of foreign tourists from Asian countries such as Malaysia, India, Myanmar, Vietnam and Laos makes up the bulk of the numbers.

This represents a significant change for the industry which has yet to be determined as either permanent or transitory given the dislocation caused to international flight connections and the overall travel industry.

In the short term, however, the signs are worrying for Thailand with some indication that sentiment towards the kingdom has deteriorated as well as impediments caused by airfare rises and other factors.

The figures for private consumption growth was 15.7% in gross figures or a net 9% when inflation is provided for in the quarter.

Already in Phuket, the Phuket Tourist Association is warning the government and tourist promotion agency that Thailand is losing ground as a holiday destination for higher spending European and Scandinavian tourists with Mr Bhummikitti Ruktaengam, the Chairman of the association, telling reporters that Phuket has lost many regular visitors to Bali in Indonesia this year.

The tourism industry leader called for a more practical and integrated tourism promotion policy from the government and expressed his concern for 2023 which will be an election year in Thailand which may create political uncertainty and unease which is a factor in the decision-making of foreign tourists with the country’s reputation for political instability turning off high spending foreign visitors.

However, Mr Bhummikitti also strongly called for Thai Airways to provide more direct flights to Phuket from continental European points of origin and those in Scandinavia to address the key issue of flight connectivity and cost which has cost Thailand dearly in 2022.

He said that the countries that have already recovered to achieve figures well over pre-pandemic levels, all had strong national airline carriers who assisted in the process.

He said that Thai Airways provided only a very limited service to Phuket while other international airlines were increasing flights to the holiday island.

It says that the industry will be facing a challenge after March 2023 when the country’s high season comes to an end, as the era of pent-up holiday demand from countries worldwide after the pandemic will also have ceased.

Inflation in 2023 to remain at inflated levels with the continued threat of geopolitical shocks, higher interest rates and reduced upside on foreign earnings

KKP Research also predicted that inflation in 2023 will remain at elevated levels, higher than the 3% officially predicted and expressed concern about the future course of oil prices amid a highly unstable geopolitical environment.

The research house, however, predicted that Thailand will see a small current account surplus in 2023 which will be a reversal of three-quarters of significant deficits caused by a weaker baht and higher oil costs in 2022.

At the same time, the risk of external developments and shocks remains high, it pointed out.

In short, the kingdom’s economic drivers in 2022 including private consumption spending, exports and foreign tourism will all be challenged amid heightened inflation particularly driven by the higher electricity costs due to kick in early 2023.

The country will also be facing increasing loan interest rates with the Monetary Policy Committee of the Bank of Thailand, this week, increasing the key policy rate to 1.25%, a hike of 25 basis points.

KKP Research expects that this will rise in 2023 and reach 2.25% in the third quarter of the year.

Key economic observers have noted that with falling government tax revenue, higher private borrowing, reduced export earnings and the high level of Thai private sector debt combined with rising interest rates, the room next year to manoeuvre by the government will be extremely limited at a time when the risk of further geopolitical shocks given the ongoing and evolving war in Ukraine, economic and political turmoil in China and malaise with the world economy, are high.

On Thursday, Minister of Finance Arkhom Termpittayapaisith confirmed that he had held talks with both the World Bank and the International Monetary Fund as part of a G20 international initiative to tackle widening economic inequality worldwide.

He said the meeting focused on repairing the damage caused by the COVID-19 pandemic which had hit the poor and vulnerable particularly hard in Thailand.

In September, the International Monetary Fund (IMF), in a circular to all central banks worldwide, urged them to stress test their banking networks to ensure that all institutions had adequate capital buffers in place to deal with a deterioration in real estate prices.

Thailand’s central bank has long since carried out such tests and the country’s external finances and banking system are known to be strong.

However, next year will be a tough one economically with former ministers both at cabinet level and within the prime minister’s office, warning that an economic storm could be brewing just as the kingdom goes to the polls.