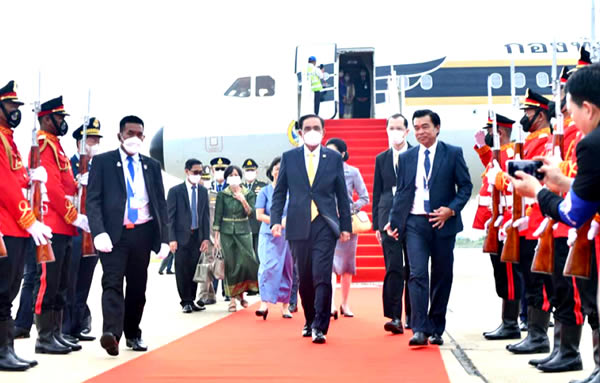 Thailand is expected to move faster towards a 2023 General Election after the Asia-Pacific Economic Cooperation (APEC) Summit ends on the 19th of November next with a realignment at the top as Prime Minister Prayut Chan ocha is all set to join a new political party and take MPs from coalition parties with him on a new political journey as a politician.

Thailand is poised for key political developments after the Asia-Pacific Economic Cooperation (APEC) Summit ends in Bangkok on November 19th with Prime Minister Prayut Chan ocha expected to put his political cards on the table at that time while on November 30th, the Constitutional Court is expected to rule on the country’s organic election laws which will play a critical role in determining the makeup and balance of power after the General Election which will take place in 2023.

Thai Prime Minister Prayut Chan ocha touched down in Phnom Penh on Friday for the weekend summit of the 10-member bloc where the relationship between ASEAN, the United States and China will be a key issue as the bloc tries to steer a neutral course with the focus on trade and investment between the two competing powers.

Back in Bangkok, General Prayut left behind a seething political scene as the kingdom moves towards a General Election next year with key developments expected after the Asia-Pacific Economic Cooperation (APEC) summit which Thailand will host in its capital on November 18th and 19th.

On Friday, it was confirmed that Chinese President Xi Jinping will attend the summit in Bangkok in person.

This will be seen as a coup for the Chinese Foreign Ministry with the absence of US President Joe Biden because of the marriage of his granddaughter Naomi in Washington DC.

Mr Biden is scheduled to meet President Xi Jinping at the G20 meeting in Bali, Indonesia which will run from November 15th to the 16th.

The Constitutional Court, on Wednesday, indicated that it may hand down a decision regarding the validity of new election laws which were controversially passed by the House of Representatives in August when what was considered a contrived lack of quorum, saw the original version of the law accepted by parliament and passed on for further legal processing.

This led to a petition from 105 members of parliament, in support of smaller parties who will be disadvantaged by the new laws, to the court under Sections 91 to 94 of the 2017 Constitution to have Sections 25 and 26 of the organic law for the conduct of the next General Election, declared invalid.

The new laws allow for a divisor of 100 to be used with 100 party list seats to be filled based on the final national tally in the two-ballot General Election unlike the single ballot used in the last poll.

It will mean that the Pheu Thai Party, the country’s main opposition and the largest political party, will stand a better chance of picking up party list seats in proportion to its national vote.

In the 2019 General Election, despite achieving a vote share of 21.9%, the party did not return a single party list MP. The current opinion polls show the Pheu Thai Party with a consistent support level of over 34%.

The reformed laws will inevitably wipe out small micro parties in favour of the bigger parties with substantially higher support by raising the threshold or quota in the number of votes required per seat won.

The 2019 system effectively penalised the Pheu Thai Party for winning more constituency-level seats by using a divisor of 500.

Decision by the Constitutional Court was expected in early 2023. The decision could set the course ahead for the General Election or create a short term crisis

Hence, the reason for the relatively speedier decision.

If the court strikes down the electoral laws, it will create a crisis and leave the government looking for an answer in order to clarify the basis for the next General Election, something that will be made more complicated if the House of Representatives is dissolved at an earlier date.

It comes as there is renewed speculation that a General Election will be called before the end of 2022 despite consistent statements from ministers that the government will continue and possibly serve out its full term with an election date already set, provisionally, by the Election Commission for May 7th if that turns out to be the case.

Speculation this week has centred on the path or way forward for General Prayut Chan ocha, the prime minister.

There are now strong signals that he may switch allegiance to the new Ruam Thai Sang Chart Party (RTSC) established in March last year by a former aide to General Prayut, Seksakol Atthawong.

General Prayut was the nominee of the Palang Pracharat Party when parliament met after the last General Election on June 5th 2019.

However, things have changed since then with stronger demand from within the Palang Pracharat Party for its own party members to hold positions of power at cabinet and ministerial level.

In 2020, General Paruyut’s close friend and cabinet colleague since taking power after the 2014 coup, General Prawit Wongsuwan, was elected Palang Pracharat Party leader and it is now widely accepted that General Prawit will be the party’s first choice as nominee for prime minister when parliament meets after the next General Election in 2023.

On Monday, General Prawit told the media that he would have no problem if the prime minister were to switch his allegiance to another party even though General Prayut, at this point, is not a member of any party and is being tight-lipped about his future intentions.

The prime minister however did send a strong signal in recent days as to his intentions when he appointed Mr Trairong Suwannakhiri as a key adviser on Wednesday having earlier been seen with him at Government House.

Mr Trairong is a former veteran of the Democrat Party who resigned from that party recently saying he was seeking a new political home better suited to his outlook.

The nature of Mr Trairongs’ appointment to the PM as a speech writer and political adviser in preparation for the forthcoming General Election has prompted further intense speculation about the date for the next poll and the future of both men within the newly formed Ruam Thai Sang Chart Party (RTSC).

A source within the party was quoted on Friday in the Bangkok Post newspaper as saying that an announcement on the prime minister’s future could be expected at the end of the Asia-Pacific Economic Cooperation (APEC) on the 19th of November next.

‘We are confident the prime minister will join the party after the conclusion of Apec,’ the source said. ‘If and when Gen Prayut joins the party, it will be necessary to reshape him into a fully-fledged politician for a refreshing change. His military image will take a back seat to his prominent role as a politician. We are also confident the party’s popularity will increase if he joins us.’

The source also advised that MPs within both the Democrat Party and the Palang Pracharat Party were waiting to follow General Prayut if he joins the Ruam Thai Sang Chart Party (RTSC).

General Prayut regularly scores highly in national opinion polls as a favourite choice for prime minister, well ahead of any other coalition government minister but below previous levels of support when he used to lead such polls before the 2019 election.