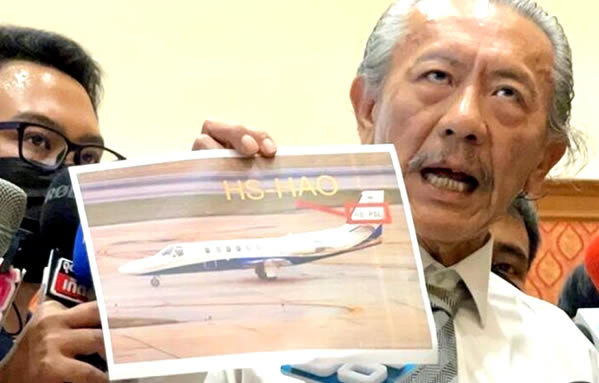 It was initially reported that the alleged gangster had flown out of Thailand on the same jet seized on Saturday but this theory was overturned at a press conference given at a Bangkok hotel last weekend by former underworld figure turned politician and social activist, Mr Chuvit Kamolvisit.

Police and officials have moved to seize the assets of the alleged Chinese drug kingpin Mr Chaiyanat Kornchayanant and his wife including a luxury executive Cessna jet found parked at an airport faculty in Prachuap Khiri Khan after information was supplied to authorities this week by former Bangkok politician and underworld boss Chuvit Kamolvisit.

Police and officials at the Office of the Narcotics Control Board (ONCB) led by Secretary-general Wichai Chaimongkhon have moved to seize the assets of alleged drug kingpin Mr Chaiyanat Kornchayanant who was ordered to be detained by the Bangkok South Municipal Court on Thursday following his arrest on Wednesday by a police task force on charges linked to the sale and distribution of narcotics.

On Friday, some confusion arose as officials at the Office of the Narcotics Control Board (ONCB) moved to seize a private executive jet located at Bo Fai Airport in the Hua Hin District of Prachuap Khiri Khan province.

Details of the aircraft and its flight plans had earlier this week been submitted to authorities by former Bangkok politician and underworld figure Chuvit Kamolvisit who last weekend, at a press conference in Bangkok, revealed that the plane which was thought to have ferried Mr Chaiyanat or Du Hao out of the country had, in fact, never left the jurisdiction.

Mr Chuvit revealed that the alleged gangster, now before the courts after his arrest, had never left the country at a press conference at the Davis Hotel in the Sukhumvit area of Bangkok last weekend.

At the briefing, Mr Chuvit displayed to reporters a range of photographs of the plane and technical details including flight and location coordinates.

It had earlier been reported and accepted that Mr Du Hao had evaded police on his trail by departing the kingdom in the aircraft.

Initially, on Friday, the Secretary-general of the Office of the Narcotics Control Board (ONCB), Mr Wichai, had suggested that the ownership of the aircraft was not clear but it is understood that after studying documentation linked to it, officials were later satisfied that it was associated with Mr Chaiyanat and therefore proceeded to impound it along with other assets of the suspected crime billionaire.

Police on Saturday reported that they have sought to meet the person who is listed as the official owner of the aircraft after establishing that it has been linked to Mr ‘Du Hao’ who has, in the past used, the plane.

They have asked the person involved in for questioning and requested him to bring all documentation within his possession concerning the beneficial ownership of the aircraft located at the airport facility.

It is understood that confusion over the ownership of the plane was cleared up on Saturday when the permanent secretary at the Ministry of Justice revealed that the company that owned the jet was one in which Mr Du Hao was a shareholder.

On Monday last, Mr Chuvit submitted a file with his detailed research and evidence to the Ministry of Justice for the attention of Minister Somsak Thepsutin.

The Office of the Narcotics Control Board (ONCB) is now awaiting more detailed information from the Royal Thai Police and the task force working on the case and will then move forward with the seizure of a luxury home, extensive property interests, financial assets, vehicles and the Cessna executive jet.

Police have also confirmed that they are moving, at the same time, to freeze the assets of Mr Chaiyanat’s wife, a serving police colonel, as part of standard procedure because of the spousal property relationship under Thai law.

The Office of the Narcotics Control Board (ONCB) will then conduct an enquiry based on police reports before it, in consultation with state agencies such as the Department of Land,  and take appropriate action towards the seizure of the assets in question within 7 days.

Such action will, of course, be open to judicial oversight.

On Friday, the Director-general of the Corrections Department, Mr Ayuth Sintoppant confirmed that Mr Chaiyanat Kornchayanant was being held in quarantine within the Central Correctional Institute for Drug Addicts in the Chatuchak area of Bangkok.

Afterwards, he is to be held in what is termed a buffer zone.

He underlined that the prisoner was being held without being afforded any special privileges because of the high-profile nature of the case and pointed out that consultations between Mr Du Hao and his lawyer were only taking place via video calls.

Meanwhile, in response to a controversy linked with this case, Deputy Metropolitan Police Bureau Commissioner Major General Nitinan Petchborom has confirmed a disciplinary enquiry into the actions of the Commander Metropolitan Police Division 6, Police Colonel Natthapon Kominchart who has been asked to account for himself.

‘Police are tracking the financial activities mentioned in Police Colonel Natthapon’s testimony,’ he revealed on Saturday. ‘We will summon people who are involved for questioning.’

The allegations against the senior police officer are related, it is understood, to demands relating to the release of a luxury car seized in the raid on an exclusive nightclub for Chinese people in the Sathorn area of Bangkok where massive quantities of illicit drugs were seized along with six safes full of cash.

A force of hundreds of officers from the Metropolitan Police Bureau was involved in the massive raid during which 237 people were arrested and 34 luxury cars seized.

This raid, on October 26th, last initiated the investigation into the activities of Mr Chaiyanat and other criminal drug gangs or networks laundering money from the sale of illicit narcotics.