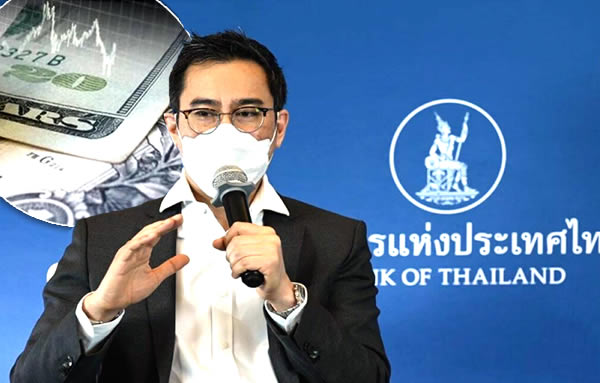 All eyes will be on the Bank of Thailand’s Monetary Policy Committee meeting on Wednesday when it will be under pressure to go beyond a 25 basis points rise in the borrowing rate which currently stands at 0.75%. Inflation of 7.86% in August and the plummeting baht will make a strong case for a heftier rise but the impact of higher borrowing costs on ฿15 trillion in household debt recorded at the end of June gives us some idea of how this may impact what Bank of Thailand Governor Sethaput Suthiwartnarueput has described as a fragile and uneven economic recovery with the country trying desperately to move beyond the disaster inflicted on the economy in 2020.

Pressure is building on the Bank of Thailand as it seeks to maintain its benign interest rate policy as the baht tumbled again on Monday with US interest rates at between 3% and 3.25% and Thailand’s at 0.75%. This comes as Thailand reported a $4.2 billion trade deficit in August and with the country’s vast foreign exchange reserves falling by 5.4% from mid-August up to last Friday. On Monday, days ahead of the Monetary Policy Committee of the central bank, Governor Sethaput Suthiwartnarueput told a forum that he was concerned about the kingdom’s massive ฿15 trillion in household debt which he described as a structural impediment to GDP growth.

The reason for the precipitous slump is the increasingly wider divergence between Thailand’s lower interest rate regime and an aggressive Federal Reserve in Washington DC which raised its bench rate by 0.75% last week to between 3% and 3.25% and has made it clear that up to two more hefty rate hikes are in store by the end of 2022 with a possibility of a US borrowing rate as high as 4.5% to 4.75% by the end of the year although this is at the upper limit of expectations stateside.

The corresponding policy from the Bank of Thailand has been a commitment to a more moderate or gradual interest rate trajectory which saw it raise interest rates on August 10th by only 25 basis points with two more rate hikes expected, one this week and the other on the 30th of November next.

Up to this week, and what has to be seen as a sharper and more volatile movement of the baht, most economic analysts have been predicting a 25 basis points rise on Wednesday but the situation must be putting the Bank of Thailand and its governor, Sethaput Suthiwartnarueput under enormous pressure particularly given the comments by the acting Prime Minister Prawit Wongsuwan at cabinet last Tuesday warning that he did not want to see a repeat of 1997 and a rate of over 50 baht to the dollar.

The acting PM has since retracted the remarks and fully accepted that the baht’s value is governed primarily by market forces.

On Monday, Governor Sethaput revealed that Thailand’s household debt ratio for the end of June was 88% of GDP.

That means that the kingdom’s combined private bank debt at that point stood at a massive ฿15 trillion which is one of the reasons why the bank is holding fire on raising interest rates.

The question is for how long can the bank withstand market pressures as deposit or fund holders follow a better rate of return for their money outside of Thailand bringing the baht lower?

On Monday, Governor Sethaput highlighted the need for the kingdom to tackle its crucial household debt problem which the central bank chief described as a structural impediment to the ability of the economy to grow.

He confirmed that the economy will grow this year but admitted that it would be both weak and uneven.

Thai economic planners are desperately pinning their hopes on at least 3% growth this year as the country is only expected to recover from the economic damage inflicted by the pandemic in 2020, sometime in the latter half of 2023.

A survey conducted in August however held out more hope even as it revealed that the average Thai household had a debt level of ฿501,711.

The research highlighted that this debt was supported predominantly by asset purchases.

The central bank chief said tackling the household debt problem effectively through financial institutions was a key priority as it was something that would allow the economy to achieve a smooth takeoff.

He talked about involving employers in assisting employees with debt problems and schemes designed to help borrowers find sustainable solutions to their debt challenges.

Mr Sethaput was speaking to a forum in Bangkok about an issue which has been identified by him repeatedly as critical to Thailand’s ability to heal its economy which is increasingly seen as falling behind its peers in Southeast Asia.

However, the pressure is mounting on the central bank with inflation in August in Thailand at a 14-year high of 7.86% and the weak baht beginning to make its presence felt in the numbers as the cost of imported goods including higher energy supplies, spiral with the country’s core rate of inflation moving higher than 3%.

The Monetary Policy Committee (MPC) meeting on Wednesday should see at least pressure from some of its members for a higher rate hike although policymakers feel that higher borrowing costs on top of record high inflation could kill off the country’s fragile recovery.

Minister of Finance Arkhom Termpittayapaisith insisted on Monday that there was nothing out of the ordinary happening within financial markets concerning the baht but assured reporters that the central bank was monitoring the situation closely.

‘On the baht weakness, the central bank is always taking care of what we’ve assigned. There isn’t much of anything right now. Nothing serious still,’ Mr Arkhom disclosed to reporters.

However, there is data showing that Thailand’s strong foreign exchange reserves position, although still ample, is weakening with one analyst showing a figure of $221.7 billion on August 19th last falling to $209.7 billion on September 23rd or last Friday.

That is a fall of 5.4% in just over a month with the kingdom again projected to post a substantial current account deficit for August despite over 1.2 million foreign tourist arrivals for the month.

New economic era for Thailand as the country posts consistent current account and trade deficits, imports up by over 21% in August despite export growth

This is certainly a new reality for a country used to consistent current account surpluses driven by foreign tourism and exports.

The country posted a hefty trade deficit of $4.2 billion in August as the kingdom’s imports surged by 21.3%. This, in addition to capital outflow driven by higher returns, is why the baht is falling in value.

The latest figures released by Thailand’s Ministry of Commerce, under Minister Jurin Laksanawisit, show that exports from the kingdom rose by 7.5% in August from last year up from a figure of 4.3% annual growth in July.

The figure was below a Reuters poll projection but represented a consistent and solid performance by the country’s export sector.

Exports to China down by over 20% in August

Significant data from the report shows that exports to Communist China dived by a massive 20.2% from last year’s figures, strongly underlining the disturbing picture emerging from China as its economy appears to be contracting sharply in recent months.

For Thailand, there was a corresponding boost in exports to the United States which rose strongly by 16.3% with shipments to other Asian markets being the star of the show, producing a 19.1% gain.