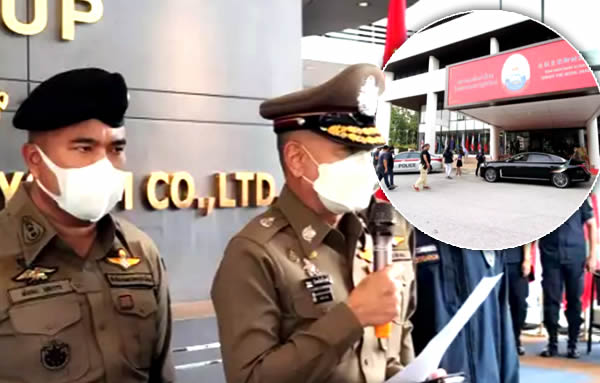 Bizarre discovery by police securing the city centre of Bangkok for the forthcoming Asia-Pacific Economic Cooperation (APEC) Summit comes as police continue to track down and seize assets linked to 5 Chinese Triad gang leaders with the national police commissioner ordering a root and branch investigation into the threat which officers are still pursuing with reports that they are likely to give a public briefing in two or three weeks.

As the Royal Thai Police pushes forward with the seizure of assets linked to five Chinese triad crime gangs found operating in Thailand, police on Wednesday announced the arrest of a 54-year-old Chinese businessman in the heart of the city renting a luxury office and being transported around central Bangkok in what appears to have been a fake Chinese Embassy vehicle and a police patrol car. The activities of the man came to light when police found what appeared to be an illegal Thai identity document while preparing for the Asia-Pacific Economic Cooperation (APEC) summit commencing on November 18th. It comes as senior officers within the Royal Thai Police are getting ready to brief the public on the operations in Bangkok and Pattaya of Chinese criminal gangs with the Chinese Embassy in Bangkok pledging its full support and cooperation with the ongoing security crackdown.

The top police officer confirmed that the three men are now blacklisted from Thailand.

Police revealed that the men are linked to five separate Chinese triad groups found to have been operating in Thailand including the owner of the now-closed Club One in Pattaya which police have linked to money laundering and the distribution of illicit narcotics.

The club was raided on October 22nd last when 200 revellers including many foreigners fled the premises before police were allowed access to test them for drugs.

The activities of the triad gangs in Thailand, a new phenomenon that has sparked alarm throughout the country, were highlighted this week by former massage parlour boss, politician and popular candidate for governor of Bangkok, Mr Chuvit Kamolvisit.

Mr Chuvit gave a personal and comprehensive briefing, with background information on the triad gangs, to the public online.

Former massage parlour boss and popular politician, Chuvit, briefed the public on the Chinese triad menace which is spot on according to police sources

Mr Chuvit said he is passing on his information to the Royal Thai Police and, this week, General Surachate suggested that Mr Chuvit’s information was by and large accurate according to evolving police intelligence.

The police chief, also known as ‘Big joke’ revealed that the Royal Thai Police was pursuing the three kingpins and that three international arrest warrants or Interpol red notices had been issued.

He said police and other agencies were still tracking down and seizing assets of the kingpins who took flight. These included high-end properties, cash and financial assets.

The briefing by Mr Chuvit gave detailed and insightful accounts of the five triad gangs that have been detected and smashed, so far in Thailand.

One is a gang that claimed to have influence with senior Thai police officers and is linked to a Chinese businessman who claims to have obtained Thai citizenship.

The second is known as ‘Mr Tony’ and it is understood that this man worked closely with Thai politicians during the pandemic crisis holding himself out as a legitimate conduit to assist state procurement efforts.

The triad leader reportedly runs a pub in Bangkok where entrance is strictly reserved for Chinese customers.

The third triad leader is ‘Mr David’ who also runs a pub which is a front for the sale of narcotics. He has lived in Thailand for many years and reportedly speaks fluent Thai.

The fourth triad leader is Mr Yu Chang Fei, the owner of a large pub in Pattaya who was arrested by the Royal Thai Police as he attempted to leave Thailand at a border crossing point in the Northeast of the country.

The fifth triad figure is known as Ming who used to be a sidekick of Mr Yu Chang Fei and ran a pub in the Ratchadaphisek area of Bangkok.

General Damrongsak has ordered a root and branch investigation which police are still pursuing with a determination to leave no stone unturned wherever this trail leads.

They are particularly looking at police and state officials who may have colluded with the powerful criminal networks.

The police are acutely aware of public concern related to the issue and it is expected that a full and comprehensive briefing will be given in a matter of weeks.

The Chinese ambassador in Bangkok has been in contact with police headquarters and pledged his office’s full cooperation with government efforts to defeat the triad criminal network.

The Chinese triad criminal network has roots which go right back to the 18th century in China and has grown in recent decades along with the communist country’s rapid economic development.

It is known to be increasingly active in Chinese diasporas across the world but particularly in countries or territories closer to mainland China such as Hong Kong, Macau and Taiwan with a spike in activity over the last decade in both Cambodia and Myanmar with the Cambodian resort city of Sihanoukville becoming a particularly strong magnet for its illicit activities.

The latest development in the ongoing sweep for irregular behaviour by Chinese businessmen and criminal networks came when police, on Wednesday, raided a luxury office suite on the 5th floor of a building owned by a respected Thai mercantile trade organisation on Vibhavadi Rangsit Road, in the Phaya Thai District of Bangkok.

Police are reported to have detected the false use of a Thai national identification card by a 54-year-old Chinese man who had access and appeared to have been renting a luxuriously appointed suite at the building.

A warrant was issued to search his offices and for his arrest.

The media were briefed by Police General Roy Ingkhapairote.

The accused Chinese man, however, dismissed police charges concerning the use of the identification card by suggesting that it was a spoof or a joke of his name made to impress his friends.

Police also are investigating the use by the businessman of what had the appearance of a black Chinese consular car with two Thai and Chinese flags at the front and an escort of what appeared to be a Thai police car but which top police officials have confirmed as a fake patrol unit.

They also suspect that the official-looking embassy vehicle was not using properly accredited nameplates.

Police also found an elaborate Thai military uniform within the businessman’s office as well as 6 firearms, some of which were later revealed to be BB guns.

The Chinese suspect, who is only facing an initial charge of making a false report, told officers that he had come to Thailand some three to four years ago to establish a business but he had not yet commenced the enterprise.